Castlevania and "The Fridge"

Although we at the Inverted Dungeon are huge fans of the Castlevania series, we are mindful that the series isn't perfect. One thing we've noticed as we've gone through the site, refreshing content as part of out "ReBirth" initiative, was that the series doesn't really treat its female characters all that well at all. To start, think about how many female characters are protagonists in the series. Not counting remakes:

That's seven heroines in 26 games for the primary series. Worse if you count the Lords of Shadow games. Then you have to consider that of those seven heroines:

That leaves two female main characters who aren't abused in one way or another by the series... except Sonia's game was removed from continuity because, as per Konami, "something something, female heroes didn't make sense in that time period after all." So we're down to just one heroine, Carrie, who seems to come out the other end okay. Good for you, girl.

Now, we at the Inverted Dungeon want to make it clear that we understand why there are a lot of male heroes in the game series. When you look at the movies that were the inspiration for the Castlevania series, those films are all about brave men working against the machinations of an evil monster. And yes, more often than not those stories involved pretty, young, virginal girls (who were usually white, but that's it's own discussion), taken by the monster as part of its plan.

So we get it. When Dracula kidnaps four girls, including Richter Belmont's fiance, Annette Renard, at the start of Rondo of Blood, that's just playing into the tropes set by the Universal and Hammer films that came before. The same can be said for an older title, Haunted Castle, wherein Simon Belmont's wife, Selena, is taken by Dracula (on the day of the wedding, the cad) to lure the vampire hunter to the castle. This is a classic modus opeprandi for the vampire derived directly from his past stories.

The taking of a young woman (bride or otherwise, although Dracula really does have it in for the instituion of wedding, maybe because his own wife, Lisa, was dead), is a trope of the genre. It plays on the fears young women would have about arranged marriages, the act of them being forced into a union with someone that could end up being a monster. There's a whole field of study that looks at the myths and legends about young girls and the monsters that come to take them. You can look not only at the Universal and Hammer movies, but at tales like Beauty and the Beast, Eros and Psyche, and so on. It certainly makes a case for why the first couple of games in the series need not be judged on their basic subject matter.

That said, the first few games came out in the 1980s and early 1990s. After a certain point, we expect our media to grow up and mature. By the fifth game in the series, Rondo of Blood, we'd pretty well had enough kidnapped damsels -- anything afterwards should, reasonably, attempt to evolve. Media has to mature, or you end up with a series of Duke Nukem games that, eventually, no one wants to play (just look at the critically panned Duke Nukem Forever as illustration of that).

These things don't have to happen all at once, but we do expect the baby steps to occur. Maria Renard may have been made into a love interest for Alucard by the end of Symphony of the Night, but she went to the castle on her own and was working to find a way to free her adopted brother, Richter, from the power of Dracula. It's a step forward. And then you get Sonia Belmont in Legends who is the protagonist of the piece, and Alucard is relegated to love interest in the game. Sure, Alucard has to "test" the young Belmont to prove she's ready to fight Dracula, which is a bit condescending, but Sonia at least has more agency than any female hero before.

Which then leads us to Carrie Fernandez. She and Reinhardt Schnider (the Belmont analogue) have concurrent storylines in Castlevania 64, but the two don't cross directly with each other. Carrie doesn't need Reinhardt to aid her, she's never looking for someone else to justify her own heroism. She has all the agency of her story -- it's her story, start-to-finish.

It is a pity that Castlevania 64 wasn't a better game because Carrie is quite a milestone for the series, one the games struggle to replicate. As noted above, Carrie is the only heroine to come out of her own game unscathed. Sure, she might end up with a love interest (who may or may not end up being Dracula in the end), but they aren't her primary motivation, nor is much made of it until the end of her story. She's also the only Belnades sorceress to ever have a solo adventure -- all the others team up with men for their adventures through Dracula's castle.

After Castlevania 64, though, things take quite a downward turn. Aria of Sorrow features two women, Mina Hakuba and Yoko Belnades. Mina is just a love interest and has no agency of her own -- literally she's there simply to motivate the hero, Soma Cruz. And, as noted, Yoko, who is suppsoed to be a hero in her own right, is wounded and shoved to the side essentially so Soma has a reason to venture even deeper into the castle. 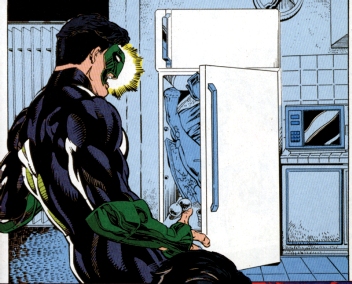 This, the act of taking the agency away from a female character, usually by wounding, outright murder, or depowering, is called "fridging", the verb-form of "Woman in Refrigerators". The term, coined by comic writer/artist Gail Simone, was inspired by Green Lantern Vol. 3 #54 (1994) wherein newly-minted Gren Lantern, Kyle Rayner, comes back to his apartment to find that his girlfriend, Alexandra Dewitt (who was only introduced six issues earlier), had been killed by the villain Major Force and shoved into the fridge. This rendered Alexandra into little more than an emotional device for Kyle's own story. You can find a whole host of female characters throughout comics that suffer this fate, most famously Supergirl at the end of Crisis on Infinite Earths and Batgirl in The Killing Joke.

Killing characters can be done in such a way so that they aren't fridged. Female characters can die at the end of a major storytelling arc about them and it can lead to a strong finale for them. Jane Foster's run as Thor is a good example: she's able to use the hammer, Mjolnir, thus becoming Thor, but she's also dying of cancer and using the hammer destroys her chemo treatments. In the end she willingly dies from using the hammer because she's a hero and she has a job to do. (Of course they then comic book her death, bringing her back to life almost immediately after, where she willingly passes the hammer to Thor Odinson so she can live again, but... yeah...)

The reason why fridging is brought up, though, is that most characters in just about every media (not just video games but also comics and movies) are male. It's rare to find a male character getting fridged to motivate a female hero, but the inverse is all too common.

That's what makes the later actions in the Castlevania series standout so aggregiously. After the double-feature of Sonia and Carrie we get:

And, of course, there's the fridging that, essentially, kicks off the whole chronology of the series. As detailed in Symphony of the Night, Dracula's wife, Lisa, is killed by townspeople who think she's a witch (because she practices magic and is married to a vampire lord -- honestly, I'm with the townspeople on this one). This leads to Dracula swearing vengeance against all of humanity, vowing to take over the world and kill everyone on it. And thus every game in the series slots in afterwards, all motivated by Lisa's death.

Except, if you agree that Lament of Innocence is also an origin story for Dracula and that Matthias Cronquist, via the power of the Ebony and Crimons stones, becomes the vampire lord we'll all know and love, then that means Dracula lost two wives, both before their respective games even begin. The whole reason Matthias goes evil is because his wife, Elisabeth, died due to illness while Matthias was off being a knight of the land. That's two fridging events for one male character.

The point is not to take away all your good feelings for the series. Seriously, we run a Castlevania fan site and you're pretty deep into it if you're reading this article, so we're all fans here. We love this series to bits, but even still we have to take a moment an examine the things the series does poorly. Maybe it's a choice on the part of the various producers over the years, or some other motivator that leads them to place males above females in the series, making the women into plot devices for the heroes, or sex objects, or both. Certainly with the #MeToo movement, a time has come for us to reanalyze the media we consume with fresh eyes. This is something we should all think about and study, especially if the series ever comes back full force.

We at the Inverted Dungeon love Castlevania and we just want to see it move forward with the times. Give us some ass-kicking ladies, the Castlevania equivalent of Wonder Woman or Black Widow that we can enjoy along side all the buffed-out, leather-skirted bros we already have. Skip the tragic backstories, the forced love affairs, the weird fridging events and let us just enjoy them for who they are and what they do.