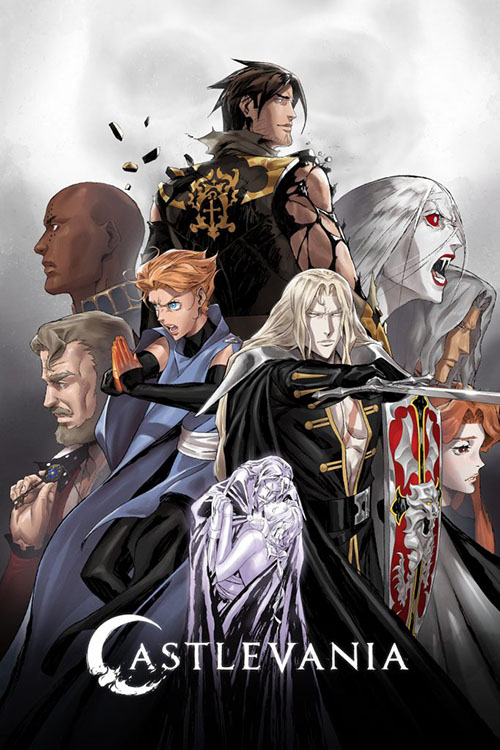 And here we are, entering into this final season of the original series of Castlevania, Netflix's adaptation of Konami's long-running game series. That's not to say this is the end of Castlevania on Netflix as the series continues in further installments adapting other eras of the timeline, but for this series that focuses on the lives of Trevor Belmont, Sypha Belnades, and Alucard, along with all their allies and enemies from 1476 AD, this is the end of the line.

Considering it's a big conclusion, this fourth season sometimes struggles to meet the needs of that "fitting ending" fans were likely looking for. Much of that is probably due to the fact that the show kind of combines plot ideas from both Castlevania III: Dracula's Curse and Castlevania: Curse of Darkness, two stories that originally happen three years apart and focusing on entirely different heroes -- the latter game dealing with Hector and antagonist Isaac. Mashing all of that together, and more, created something of a weird story that couldn't easily be resolved in a single season... so the show doesn't. It instead breaks these last 10 episode up into effectively two "half seasons", and then just focuses on different storylines for the front and back half.

It's arguable if this strategy really works as well as the producers hoped. On the one hand it is nice to basically focus on one set of stories at a time instead of how the third season just bounced around between all the storylines, taking its sweet time generating any narrative momentum. At the same time you are left waiting for one half of the show to pick up while, realistically, the storyline you probably didn't care as much about takes up the whole first half of the season. I can understand why the producers did this, I just don't know if it works that well in practice.

This season sees the four storylines from season three merge down to two. The first half of the season is dominated by the conflict caused by Carmilla wanting to take over not just a slice of Europe, as was her original plan, but as much of the colonized world (of the late 1400s) as she could, once her ambitions grow. Her sisters -- diplomat Lenore, administrator Morana, and general Striga -- each begin to have their doubts about the plan, but their concerns are quickly cut-off when Isaac uses a magical portal to send himself, and his army of devils, though to attack the castle of the sisters, ostensibly so he can have his revenger against Hector (for betraying Dracula back in season two). 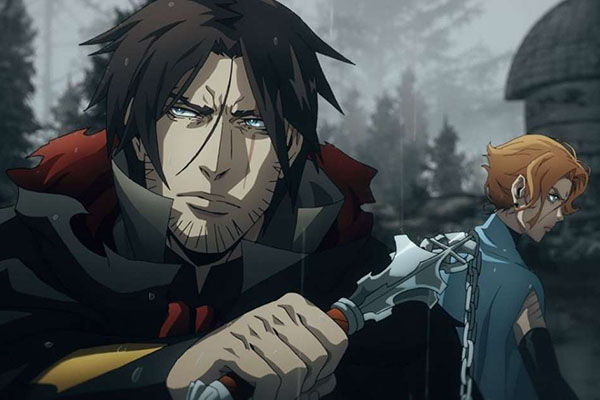 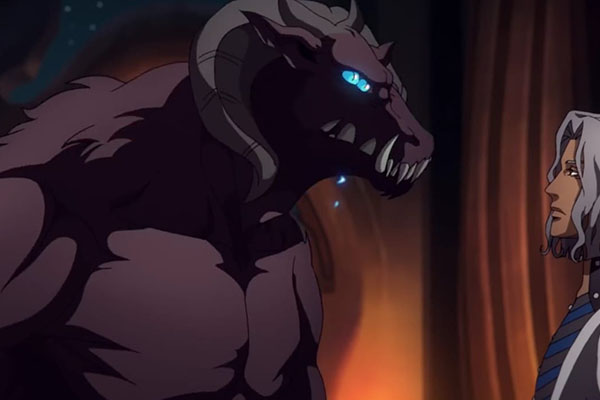 Once this plot line resolves itself (no spoilers) we then focus on the parallel tales of Trevor, Sypha, and Alucard. Trevor and Sypha had gone off to explore the world and find Sypha's people, the Speakers, but instead they only found a lot of pain and anguish, along with one death cult after another trying to resurrect Dracula. This leads them to Gresit, the site of Dracula's much earlier attack on the people of Wallachia, and the two warriors realize there's yet another plan to resurrect Dracula. This then ties into Alucard who, on his own path, left Castle Dracula (which was stuck on top of the Belmont hold) to aid the people of Danesti and defend them from an attack of the Night Creatures. We're then led to realize that the Night Creatures attacking Danesti are aligned with the death cult looking to resurrect Dracula, and everything eventually leads to the heroes teaming up once again to save the world for the evil creatures living inside it.

Of the two halves of the season I'd argue that the back half is more interesting, but neither part of the story is that great and a lot of it has to do with the villains on offer. We spent enough time with Dracula int eh first two seasons that we understand him as a villain. As much as the death cults want to bring him back, in all honesty Dracula doesn't seem like that big a threat (especially since he was reunited with his lost love, Lisa in Hell). That then puts the onus of playing the heavy on two other characters, Carmilla and newly introduced Ratko to pick up the slack. Of the two Carmilla is more interesting but only because Ratko is just an awful character (even though, yes, he has a hidden secret).

Carmilla we've seen for two seasons so she's at least familiar. The issue with her is that we don't really know much about her, not to the point where we really feel connected to her. She was prominent in season two where she acted as a kind of schemer, but then she was sidelined in the third season for her sisters and her development essentially stopped. This season does give her one good speech, about how men always took from her so she's taking it all back, but she goes from potentially interesting character to complete psychopath in a single episode and the season never looks back. Her speech was meant to make her relatable, but everything after leaves her on the outside for the audiences, so she's not a really well developed heavy. She's got the idea, and motivation, of a heavy, but none of the true development or interest from the audience that could have made her work.

Ratko, meanwhile, sucks. I would normally avoid spoilers (although you can read the other sections of this site to spoil away if you so choose) so I won't say what's really going on here, but Ratko, in all his guises and forms, is depicted as another schemer. He supposed to be this ancient vampire who terrorized London for a thousand years (even though London didn't exist that far back), but he comes across as a sniveling little weasel that cusses a lot. That's his whole character, boastful but stinky who wanders around saying "fuck" as every fourth word. The fact that he becomes the focus of the back half of the season doesn't make it any better, it actually makes it much worse. This was a character that needed a massive rewrite as the way he's depicted in the season just doesn't work at all. 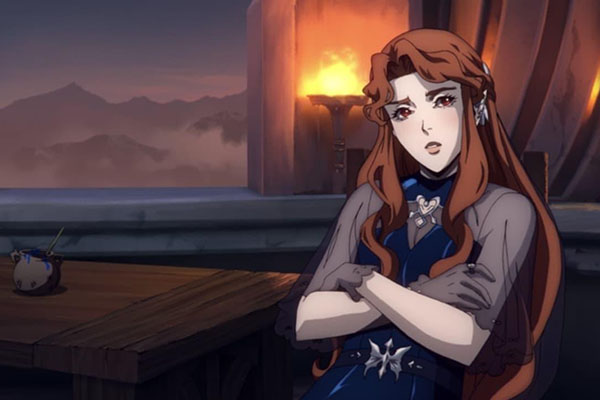 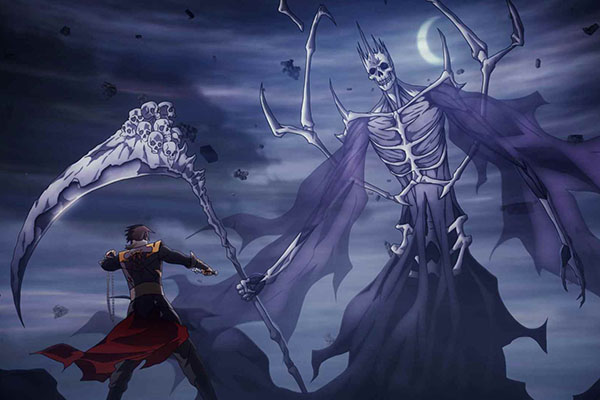 That said, there are a lot of choices the series makes that still work very well in this season. The leads of Trevor, Sypha, and Alucard are still quite compelling. Even if Hector and Isaac never quite rise to that same level they at least have enough development to make them somewhat interesting here and then, thankfully, they're sidelined for the back half of the season so the good characters can take the limelight. Our leads get to dominate the story and they do a great job of it.

Plus, as always, the action in this show is great. The characters continue being depicted as forces of nature with their chosen forms of attack and the show delights in letting these characters unleash all kinds of cool moves and special attacks that make you believe they really are the greatest warriors in the land. I think it's actually wide, in that regard, that the series is ending it's original run when it does as the power creep for these heroes was almost becoming too much; another season and it would have been absolutely ridiculous.

There's also something to be said for the series willingly deviating from the source material as much as it has. A straight adaptation of the games would have become repetitive after a while -- go to Castle Dracula, fight Dracula ad nauseam. By letting the series wander it managed to maintain the feel of Castlevania without being beholden to the story beats of the series, which at times led to new and intriguing storylines that remained unpredictable to the viewers. It didn't always work, but often the show found a good through-line to follow that really helped to carry it along.

The fourth season doesn't improve greatly over the third season; both are uneven, although in different ways. But once again, when the show finds a way to elevate its material and get moving, it really hums along nicely. This season was strong enough to act as a decent, if not perfect, conclusion to this arc of the run and it still leaves me interested in where it's going to go from here. It's Castlevania so likely I was going to enjoy it, but this season is solid enough that I could see recommending the whole run to anyone interested. Flaws and all it's a solid run that caps nicely with this fourth season conclusion.