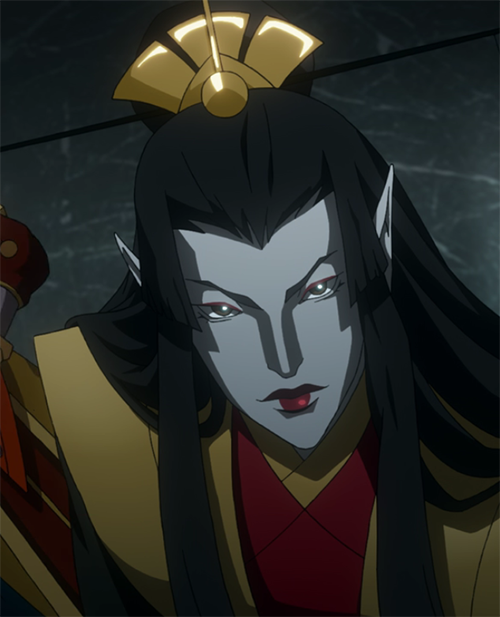 As we've established, vampires aren't common characters in the Castlevania game series. A few of them do exist, most notably Dracula, along with Carmilla, Actrise, Elizabeth Bartley, but the vampires are far outnumbered by all the other creatures, and bosses, that exist in the series.

The Netflix series, though, has changed that some, giving Dracula more vampire minions for his horde (and implying there were even more vampires out there that the heroes could eventually face). Cho was one of those vampires, a bloodsucker from the Far East clearly inspired by the Eastern Vampires of Dungeons & Dragons (as Japan doesn't have its own classical vampire myth, although similar creatures with different powers do has some basis in larger Asian mythology), with mist powers than made her quite distinct from the other vamps. She hailed from Japan where she acted as a bloody war lord before being summoned to Dracula to aid in his war.

Curiously, unlike other newly created character Godbrand, Cho did not have any speaking parts in the series. In fact, before season three she didn't even seem like a major character. It was only with the addition of two new characters, Sumi and Taka, that Cho's own story was better fleshed out. She grew into a Master Vampire that could have been respected and feared (if she hadn't already been killed off in season two, at least). 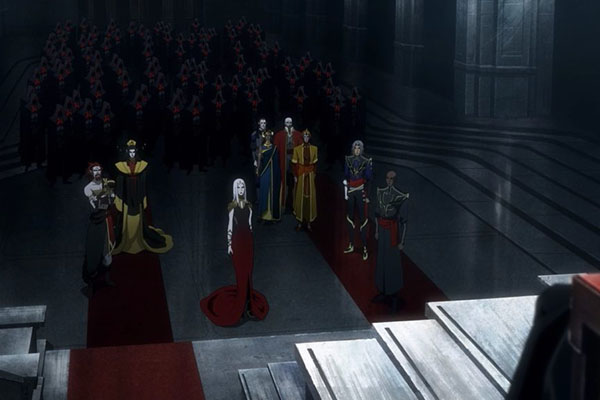 When first we see Cho she's part of the various vampire lords that wait inside Dracula's castle. Having just launched his war against humanity, Dracula needed his strongest generals at his side, ready to wage his war. None of these vampires were trusted to run the war, though; that duty was, instead, handed off to Dracula's two (human) Devil Forgemasters, Hector and Isaac. Instead the generals simply got to wait around for the time when Dracula would finally tell them to strike.

This, naturally, led them to get restless. One of the vampires, Godbrand, eventually had the idea to head out into the countryside and raid a village, to feed as vampires should, and Cho was among their number. They waged a great and bloody slaughter, killing all that were in a nearby town, but other than this one attack, the vampire generals were left with little to do.

It wasn't until near the end of the season that the generals were called out. Dracula's castle was moved (as it was a magical creature of chaos) to Braila, city by the sea, so that the minions of Dracula could cut off humanity's only route out of Wallachia. The generals, and Dracula's vampire soldiers massed, and prepared for an attack, but were then surprised when they were attacked by another horde of vampires, these led by supposedly loyal general Carmilla. Some of the generals, but not Cho, were killed in the attack, and all were carried off when the castle was dragged (against its will) from Braila.

The castle came to rest outside the Belmont hold, and the doors of the castle were thrown open by three heroes: Trevor Belmont, Sypha Belnades, and Alucard -- and the vampires stopped fighting each other and went for the heroes. All, including Cho, fell under the attacks of the heroes, and that left only Dracula remaining, who they quickly moved on to rid the land of vampiric evil. 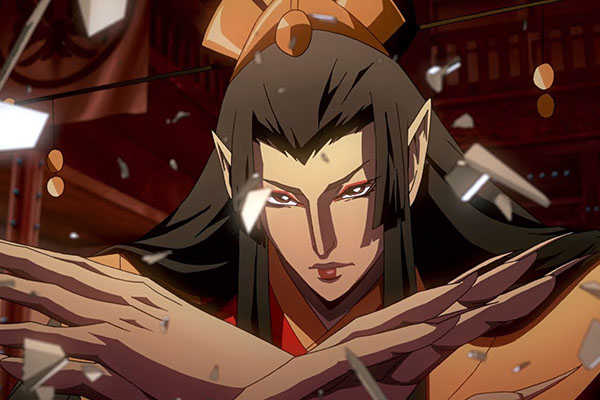 One of the three heroes that defeated Dracula, his son Alucard, remained at the Belmont hold to guard not only the Belmont secrets but also to guard the castle from interlopers. It was a quiet life, almost maddeningly so, but it was interrupted when two newbie heroes, Sumi and Taka, crept into the woods as Alucard went about his business. He heard them first, though, and quickly attacked, disarming both of them. He didn't kill them, though, as they weren't there to kill him, just to learn about vampires.

As it turned out, Sumi and Taka were two among many that had lived under the evil rule of Cho back in Japan. When she'd left to serve in Dracula's armies, it left an opportunity. With the aid of armed villagers, Sumi and Taka had taken out Cho's men, freeing their lands from the vampires. They knew, however, they were no match for Cho. They'd seen her evil, watched as she toyed with the strongest warriors in the land before feeding on them, making their deaths into a game. They feared what would happen if someone else like Cho, another powerful vampire, came to claim the lands. They needed training and Alucard was just the man to give it to them.

Well, at least until the betrayed him so they could try to take all the great secrets of the hold and the castle for themselves. Then he had to kill them and that left no one to travel back to Japan to protect the village. Oops.