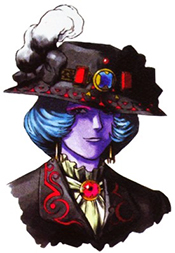 While the heroes of Castlevania are all (largely) original creations (aside from the Morris boys and their progenator, Quincey), the villains generally have come from popular culture. Literature and movies had inspired a number of Castlevania villains, from vampires to laboratory creations. Rarer, though, are original villains, and among that special group is Actrise.

A witch and minion for Dracula created specifically for Castlevania for the Nintendo 64, Actrise really only had one game to make her mark (two if you count the director's cut, Legacy of Darkness). Despite that, though, she has held a special place in the hearts of some Castlevania fans (the staff of the Inverted Dungeon included).

Maybe it's because she has actual dialogue when so many villains in the series are wordless, hulking beasts. Or maybe it's because she's a female character given a featured role in a series largely dominated by men (on both sides of the good/evil aisle). Whatever fan's reasons for liking this villainess, Actrise has lived on in a few fan works (including ICVD's own sister site, Castlevania RPG) even after her games were forgotten by most of the public.

One of Dracula's three lieutenants in Legacy, Actrise was an ambitious woman even before swearing her allegiance to Dracula. Craving more and more power, Actrise turned to the dark arts, learning the evil side of sorcerery. During her dark rituals, the sorceress sacrificed 100 children, including her own daughter, increasing her power (and prestige among the servants of the damned).

Taken under Dracula's wing, Actrise served faithfully, helping to orchestrate his resurrection in 1844. When Cornell came to the castle in search of his adopted sister, Ada, Actrise was there to taunt the werewolf. While he may have been bale to save his sister, Actrise was instrumental in removing his cursed werewolf from from his body, freeing the man (but, in the process, stealing away his magic). 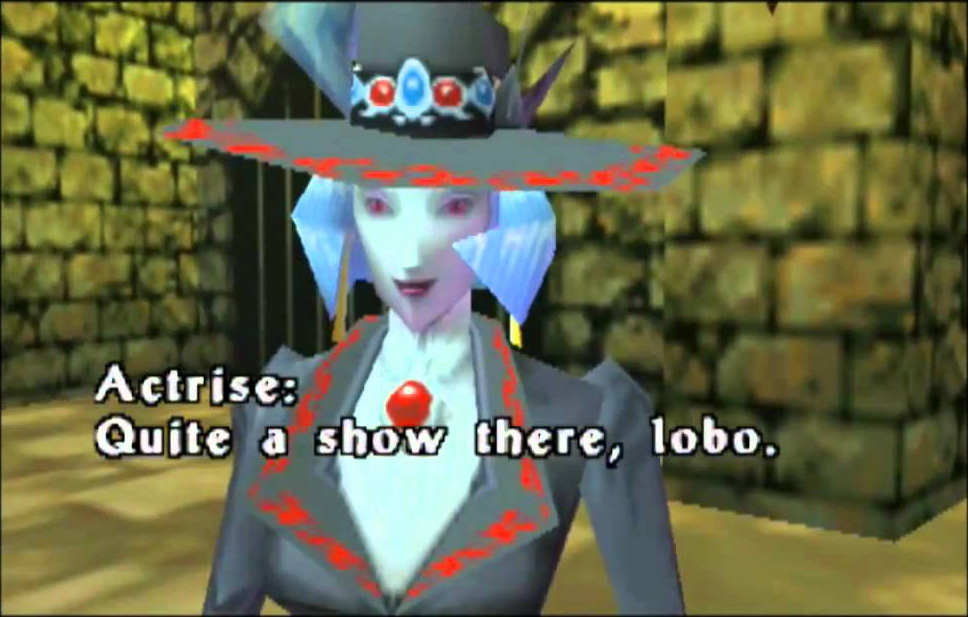 By sacrificing the werewolf form in a dark ritual, Actrise (along with Death and Giles da Rais) helped to ensure Dracula's true resurrection, this time in the body of a child.

While Actrise plays an active role in the first Nintendo 64 Castlevania release, she only shows up for a couple of cameos in Cornell's main quest in the remake/prequel. Of course, once you unlock Carrie for play in Legacy you also get to see Acrtise's full story from the original game as well. 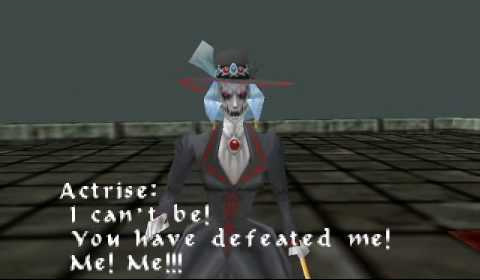 With Dracula's resurrection all but ensured, the next step was to protect the Dark Lord from interlopers while his true form matured. Thus, when the young witch Carrie Fernandez came to Dracula's castle in 1852, Acrtise actively worked to stop the girl from making progress deeper into the fortress. Seeing within the girl a powerful sorceress, Actrise offered power to Carrie as a minion of Dracula. The girl, of course, refused.

Deeper into the castle, Actrise appeared once more to the young girl. This time she attempted to turn the girl away, breaking her desire to fight Dracula. Actrise brought in another young woman, a Fernandez warrioress turned into a vampire, forcing Carrie to fight one her clan. Instead of turning her away, though, Actrise's plan only solidified Carries resolve. The young girl bested the Fernandez vampiress, venturing deeper into the castle against Actrise's wishes.

Finally, near the top of the castle, Actrise presented one more obstacle for the young sorceress to overcome. Taking matters into her own hands, Actrise challenges Carrie to a battle of magic. Raising shards of magical crystal around her, Actrise attempted to kill the young girl. Instead, Carrie found a way to blow through Actrise's crystalline defenses, laying blow after blow on the evil woman. Soon enough Actrise was defeated, he life given in service to Dracula, while Carrie continued onwards, the castle keep (and Dracula eventual defeat) the final goals in sight.

Actrise can be a powerful foe if you don't know what you're doing. Her first move will be to raise large shards of crystal arond her in an attmept to stop you from damaging her. You'll have to break the crystals to gain purchase on the sorceress (go for the smaller shards first as these are easier to break).

Once you damage her, Actrise will counter with a hail of shards, followed by homing blasts of force orbs. Make sure, too, to not stand still as Actrise will regularly attempt to summon shards underneath Carrie. The fight can be rough, but once you learn the patterns and what to do, Actrise becomes much simpler.

Although Actrise is an original character (and thus has no basis in pop-culture), it is assumed that her name is derived from the French word "actrice", meaning "actress", and is a variant of her name that is sometimes used in Castlevania 64. THis implies that Actrise was, in fact, and actress before she become an evil sorceress and minion of Dracula (having gained a taste for fame and power on the stage before looking for it in magic).