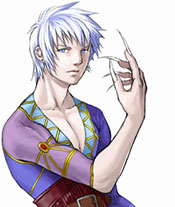 Although time has not been kind to the Castlevania for the N64, with many fans (and a number of publications) pointing out the various flaws in the game (usually at great length), it's important to remember that the game was enough of a success to warrant a director's cut re-release/prequel, Castlevania: Legacy of Darkness. For many, this was viewed as the release that would redeem the original game, granting players all the content that was cut during the first version's release.

Certainly, for fans of the original game this release was a great addition to the series. It introduced two new characters, remixed many elements, and was over all a more complete package. It didn't, however, fix any of the glaring flaws in the original game -- the engine was more or less the same as before, so all the twitchy jumps and long, bogged down areas remained as before -- it wasn't so much an improvement as an expansion pack, one many fans had to pay full price for again just to get the full experience.

What's most surprising is that Legacy ended up having any kind of legacy at all. Because the games have held a nebulous point in continuity (depending on if then-series overseer IGA wanted them in the official timeline or not, which seemed to change pretty regularly) it was a bit of a surprise to see Cornell, werewolf hero (and star of this page) make a return in the later series entry Judgment. Of course, that game has it's own nebulous place in continuity (often left out by many fans becuase of how weird it is and how little it directly impacts the series as a whole).

Not that we at the Inverted Dungeon have ever forgotten about Cornell ourselves -- we've had him as the co-star in our Castlevania comic, DSWC for years and years. it was just nice to see someone else give the werewolf a little love.

As explained at the beginning of Castlevania: Legacy of Darkness, Cornell was one of a tribe of beast-men, creatures of lycanthropy cursed to walk the earth as half-man/half beast. Early in his life his pack attacked a village killing all but a single girl. Feeling guilt over the actions of his tribe (which he's never expressly said to have participated in but, as he was at the village, one can assume he did), Cornell adopted the girl, taking her as his "sister". She grew up among the beast-men, safe under the protection of Cornell.

Cornell often trained to become a better warrior for his clan, working with his life-long friend Ortega. What Cornell never realized was that Ortega was secretly jealous of Cornell and his friend's power and status. Each time Cornell would accomplish a great feat, Ortega was always one step behind. Such was the case when Cornell learned to control his beast form better, remaining in human form for longer and longer times, seemingly breaking the curse over himself. Otega fumed while Cornell gain more prestige with the clan.

To better hone his abilities and find way to control his beast permanently, Cornell left his homeland with Ada under the care of his clan and Ortega. He swore he would return one day to aid the clan in breaking the curse for all. 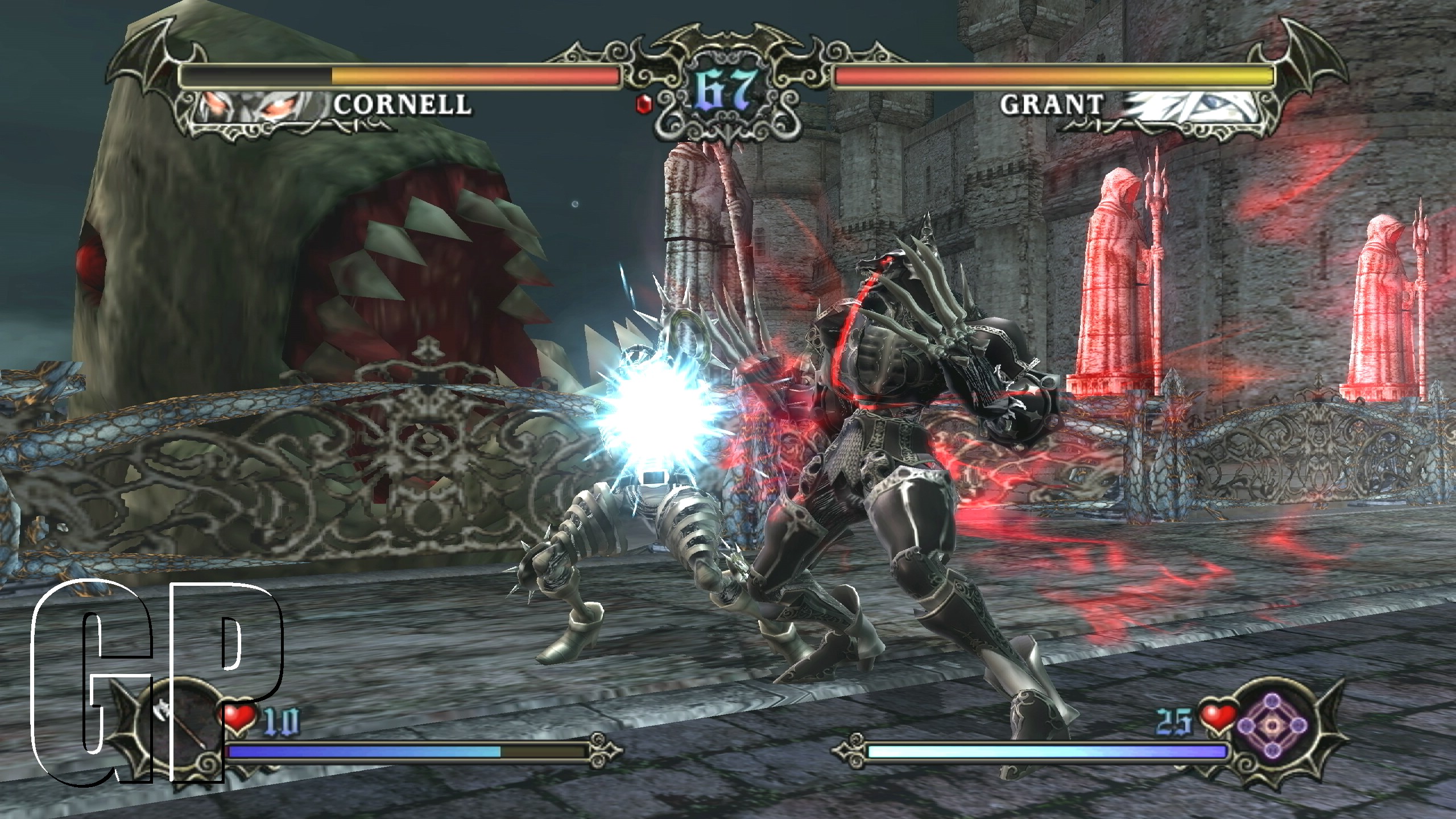 Unfortunately for Cornell, during his training the curse seemed to grow stronger, reverting him to his wolf form for longer and longer periods of time. Mysteriously, during one of his bouts as a wolf Cornell found himself inside a time distortion, unable to transform back into his human side. He realized the only way to fix his predicament was to aid the battle raging in the pocket of space-time he was trapped in.

As he learned, a ancient evil from the future, Galamoth, was treatening all of time and space by attempting to rid history of Dracula, this rendering himself rules of the cosmos. A traveler, Aeon, had gatherd the forces of light and dark together to do battle and find a champion to fight and defeat Galamoth once and for all, and Cornell was among the warriors chosen. Taking up the mantle of hero he aided in the fight, being a crucial warrior in the fight against darkness and ensuring that Galamoth's plans were unable to reach fruition.

With the war over, Cornell was able to return to his own time and finally, thankfully, reverted back to his human form to continue his training. 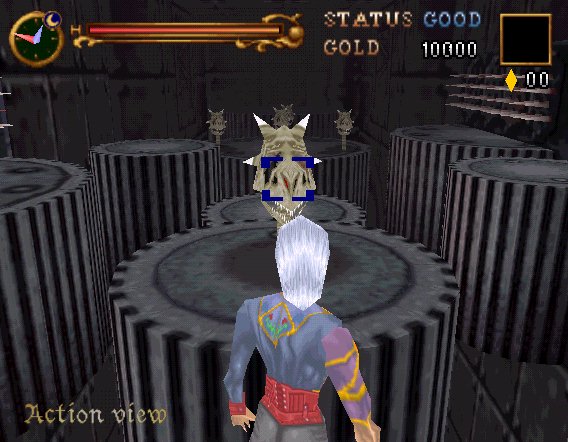 No closer to a cure for his lycanthropy, Cornell returned home from his training only to find his clan's village on fire. Rushing in to find Ada instead he found her house abandoned, the girl having be abducted by the forces of darkness. Sensing that Dracula's castle had returned, Cornell rushed to the demon lord's lands only to find his old friend, Ortega, there. As he realized, Ortega had captured Ada and assisted Dracula's forces in laying waste to the village. Dracula's minions wanted Cornell so that he could serve as a vessel for Dracula's dark power and were using Ada a lure to get him into the grounds. Ortega fled, leaving Cornell to explore the castle in hopes that his darkness would fester, making him prime for the Dark Lord.

While searching the grounds, Cornell found an old villa. Withing he came up Master Oldrey, the owner of the villa who had been turned into a vampire. Oldrey was attempting to break into the room his wife had baracaded shut so he could drink her blood. Cornell interveined, destroying the foul vampire and freeing the woman. She thanked him but asked the werewolf to find her son, Henry, and save him, too (presumably she did not know Cornell was a werewolf otherwise she likely would not have given him such an important wuat especially after being attacked by her vampire husband). Venturing into the huge hedge maze on the villa grounds, Cornell found Henry who was fleeing from the Gardener (a Frankenstein's Creature-like beast). Cornell saved the kid and got him away from the lands, sending the boy to stay with Cornell's own clan for safety (again, among werewolves, so... maybe not so safe).

Cornell was able to find a way further into Dracula's grounds, eventually making his way into the castle proper. Within he encountered Ortega twice more: once when the one-time-friend forced Cornell to fight another of his clan, a werebeast who had been permanently transformed into his animal self, and then again at the top of the fortress where the two had their final battle to the death. Upon defeating Ortega, the fallen friend showed remorse for his actions and threw himself from the castle, leaving Cornell alone to once again explore the fortress.

In the clock tower Cornell finds Ada but, before he can rescue her, Death appears. The Grim Reaper take the girl, fleeing to Dracula's chamber to sacrifice her to the demon lord's powers. Cornell gives chase, pursing to the top of the tower. In Dracula's chamber Cornell finds Death and Ada, the later of which was incased in a red crystal, ready to be given to Dracula. Cornell battles the first form of the Dark Lord, easily besting the dark prince. However, Dracula reveals his true, demonic form, forcing Cornell into one more battle. Although the demon proved strong, Cornell was stronger, defeating the hulking beast. Using his wolf powers, Cornell seperated himself from the beast, which (somehow) broke the crystal and freed Ada, who was saved by Cornell. Dracula, though, gained the wolfen powers, giving him even stronger magic to use for his eventual full return.

Freed of his cursed form, Cornell escaped with Ada. They meet up with Henry who was waiting for them outside. Cornell confesses to Ada that he really wasn't her brother (which, although he found her when she was little, one would think this wasn't much of a secret). As it turns up (duh), Ada already knew. The two resolve to go off together to find a new life (yes, as lovers, which, whatever else he and she may have thought all along, is kind of gross when you put it in writing).

Seriously, we at the Inverted Dungeon cannot stress enough how icky the ending of Cornell's story is. He raised a girl from a young age, treated her like a sister, and then when she's old enough they both go off to have a life together. As lovers. There is no part of that story that's okay. Although we don't normally say this, in Cornell's case maybe it was a good think continuity was eventually rebooted by the Lords of Shadow series.

Although a hero in the main continuity, Cornell is actually onf ot the three titular Lords of Shadow in the rebooted continuity. Each of the three Lords served as the founding members of the Brotherhood of Light. Giviong rise to the order, the souls of the three ascended; however, their bodies were left behind and these former shells were inhabited by dark spirits. The dark Cornell served as the lord of the lycanthropes, ruling over his forested domain. When Gabriel Belmont came calling (as heroes do), Cornell warned him that defeating his shadow body would kill not only that form but also the ascended soul of light as well. Gabriel would have both deaths on his conscience were he to pursue the battle.

As it was, though, Gabriel was on a mission to kill the three Lords of Shadow (pretty much whatever the consequences) and the two engaged in mortal combat. Besting Cornell's human form the lycanthrope king transformed into a hulking beast, presenting a bigger challenge for the vampire hunter. However, Gabriel was up to the task, besting the werewolf and cleansing the lands of his foul magic. This was the first step in Gabriel's quest, the first of the Lords to fall in his eventual quest to defeat the Devil himself.

Although each of the heroes in the Nintendo 64 games played somewhat different, they really weren't that far apart so as to make them difficult for any familiar player to switch between them with ease. Cornell was no exception -- much like the other heroes, he had access to levels of his main attack, with either close up claws (his melee attack) and a blast from his claws (that he could power up via the standard orbs). He was also able to use the standard subweapons in the game giving him a full arsenal to work with.

The one major difference between him and the other heroes was that Cornell could also change into his werewolf form. This mode game him increased power but it only lasted for a limited time so players had to be sparing with its use.

Cornell got quite the overhaul for Judgment. Gone were his beast slashes and sub-weapons instead replaced by a set of up close melee attacks. His best move, though, was his Rampage Mode (a la his beast transformation on Legacy of Darkness) granting him increased power for a limited time. Combined with a sold moveset, Cornell proved to be one of the more impressive fighters in the game.

A few twists were added to Cornell for Lords of Shadow. The developers gave the beast-man a giant hammer that he used for his primary attacks. He could power up the hammer with Shadow Magic (a la Rampage Mode) dealing greater damage. He then, of course, would transform into his wolf form for the final part of the fight. All around, Cornell was a solid fight in the game (although, as he was fought early in the game he wasn't one of the most difficult).