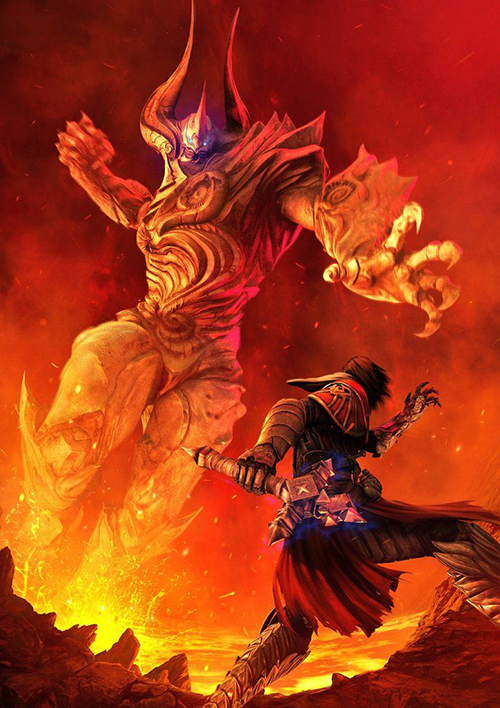 It was the end of days -- darkness spread across the land, monsters roamed, and the dead walked. Fearing for the world, one man stepped forward to stand against the forces of Darkness: Gabriel Belmont, member of the Brotherhood of Light. This knight vowed to force back the darkness and defeat three Lords of Shadow that were controlling the evil that was killing the world.

Urged on by the spirit of his wife (who has been brutally murdered before the game started, which seems to happen to just about every wife in the Castlevania series) and a man from the brotherhood, Zobek, Gabriel charged forth to take on each of the dark Lords: Cornell, Lord of the Lycans; Carmilla, Lord of the Vampires; and the Necromancer, creatively named Lord of the Necromancers. Gabriel fought each of these lords in their own domains, defeating them on their own turf.

Cornell he fought first, venturing into the land of the Lycans. There he was aided by a mute girl, Claudia, and her Black Golem. Sadly, when they made camp soon after meeting, Gabriel dreamt that he killed Claudia. Upon waking, he found her dead, with a knife in her body. The Black Golem attacked Gabriel, and the Belmont was forced to destroy it. He then ventured, alone, to face Cornell.

During his confrontation, Cornell revealed that he was but the shadowy remnant of the original Cornell, and that his true form ascended to heaven upon reaching a level of power second only to God. Gabriel fought this Shadow Lord Cornell, defeating him handily. The Belmont took the first piece of the God Mask, an item Gabriel needed if he hoped to finish his (increasingly confusingly written) quest.

The next leg of Gabriel's journey took him to the land of the Vampires, where our dark and brooding hero had to venture into Bernhardt castle. There he faced off against two vampire commanders, Brauner and Olrox, before coming face to face with the Lord of the Vampires, Carmilla. Her defeat granted Gabriel the second piece of the God Mask.

From there, Gabriel ventured into the land of the Necromancers. He battled the Necromancer for the third and final part of the God Mask, rebuilding that item. It was at that moment, though, that the true behind-the-scene machinations were discovered:

As it turned out, Zobek (who was the true Lord of the Necromancers) wanted the other two Lords of Shadow defeated so that he could have their power for himself. Wearing the twin of the God Mask, the Devil Mask, Zobek had controlled Gabriel through his joruney, having Gabriel kill his wife, and then having him later kill the mute girl Claudia. With Gabriel killing the other two lords, Zobek had all the power, and a rebuilt God Mask to use with it...

But then Satan appeared and took the Devil Mask from Zobek, showing that he was really behind everything (twisty, much?) and that he would have his revenge on God using the power of the masks. Thankfully, Gabriel jumped into the fray, fighting Satan and besting him, ridding the land of the darkness that had hung over it and freeing all the restless souls.

With the spell broken, Gabriel's wife's spirit ascended to Heaven, telling her husband that he was now free to live his life, free of his own darkness.

In two expansion packs that follow up the events in the main game of Lords of Shadow (but take place before the epilogue after the original credits), Gabriel encounters Laura, daughter of Carmilla (and a vampire, just like her mother). She tells Gabriel about the Forgotten One, a demon that was awoken when the Lords of Shadow were defeated.

The two, hero and vampire, team up to venture through the lands of Vampire Castle, looking for the entrance to the Brotherhood fortress. There, they collect and use the blood of the three founders of the Brotherhood to open a gateway into the Forgotten One's chambers, a dark prison dimension few can enter. Laura gives her life, having Gabriel drink of her blood so that he can become a vampire himself and enter the Forgotten One's realm (since you have to be a "dark one" to enter it).

Inside this hellish realm, Gabriel follows the Forgotten One as the demon works to break the seals keeping him in this prison dimension. Through the journey, Gabriel has to keep up with the Forgotten One without being detected by the hulking beast, occasionally getting moments to fight the demon before it's back to stealth and strategy.

Eventually, in front of the last seal, the demon and Gabriel have a tete-a-tete. Dark magics are unleashed -- dark magics the Demon needs to escape -- but Gabriel is the one to make use of it. He strikes down the demon, and then leaves the Underworld for the realm of man.

For a time it seemed as though Lords of Shadow conveniently ignored all of the accumulated Castlevania continuity by simply setting all it's events before the rest of the series -- a "reboot" simply by grace of the fact that it could ignore anything that came afterward. However, the end of the game (and further events detailed in its sequels) have since proven that the Castlevania series has been completely relaunched.

As far as the in-continuity events detailed in Lords of Shadow, the biggest change is that fact that, at the end of the game, Gabriel Belmont (now a vampire, as related above) starts calling himself "Dracula". As we have pointed out before, this makes absolutely no sense from a historical perspective, as Dracula was a real person -- perhaps one of the best researched and most famous historical figures (certainly on a list of them anyway), so it's doubtful anyone else could just come along and assume that name.

This, of course, along with the fact that Dracula literally translates out to "Son of Dracul" or "Son of the Dragon" (with Dracul translating to Dragon, of course). Gabriel does call himself "Dracul," which is slightly less weird, but others refer to him (in game) as "Dracula", proving no one at Konami really thought the whole naming thing out very far.

Regardless, we at the Inverted Dungeon applaud Konami for having the audacity to double-down on a truly shitty idea (making someone, anyone, into "Dracula" other than the true historical figure, Vlad "Tepes" Dracula). If you're going to do something wrong, you may as well do it as hard as you can.