After Gabriel turned to the dark-side to defeat the Forgotten One (as detailed in the expansions to Lords of Shadow, he took up residence in an old castle and started calling himself "Dracula" (the Dragon) -- although everyone else apparently misheard it and started calling him "Dracula" (because it just sounded cooler, we guess). He takes up residence at Bernhardt Castle (in the land of the vampires), apparently with plans to rule the world (as all great vampires are wont to do).

Meanwhile, Gabriel's son, Trevor, joins the Brotherhood of Light and becomes one of their knights. He marries a young woman named Sypha Belnades, and together they have a son, Simon Belmont (born 1067 AD). Yes, the child will become relevant soon enough... 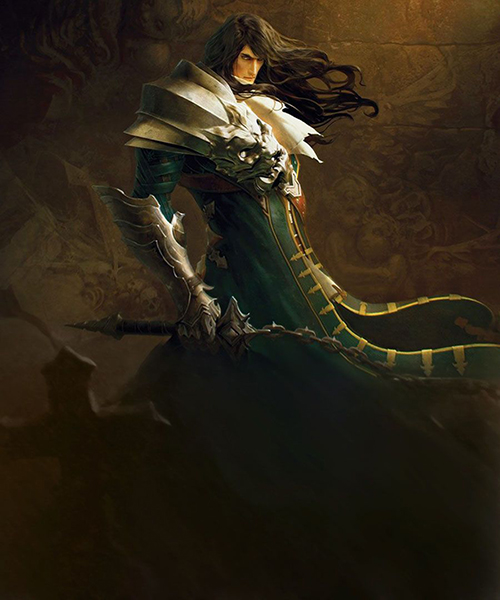 Trevor Belmont (the son Gabriel never knew he had) went to the vampire's castle to confront his father and rid the land of the vampire's evil. First, though, he had to scale the castle. Within the castle walls, in a dark temple, Trevor encountered a coven of witches. The witches were able to summon the Deamon Lord (as first introduced in the prologue to the game), sending the demon beast after the vampire hunter. Although Trevor proves victorious over the demon (literally slicing and dicing it into chunks), the Deamon Lord is saved by another briefly glimpsed villain, the Toy Maker (not to be confused with the DC comic characters of similar names).

When he was finally able to reach the throne room, Trevor confronts the Dark Lord Dracula. Although the two battle back and forth, and it seems as though Trevor would have the upper hand, he was unable to actually defeat Dracula. The vampire stabbed his son in the heart, but it was here that Trevor revealed who he really was. Distraught, Dracula tried to turn Trevor into a vampire. When he thought the conversion has failed, Dracula buried his son in a grave marked "Alucard".

With his son defeated, Dracula sends his army to take out the Brotherhood of Light (because obviously they are to blame for Trevor getting stabbed in the heart). Sypha and Simon who were at the Brotherhood HQ, flee, but Sypha is killed in the attack. Simon runs away, and is raised by kind mountain folk (eh, at this point, that makes as much sense as anything).

Trevor's quest through Dracula's castle is actually the third act of Mirror of Fate. While it comes chronologically after the prologue mission, in game it serves as the last big section (before the ending set in the relative present of the game).

Making Trevor into Alucard is a bit strange, but in the opinion of the staff of the Inverted Dungeon not any more weird than making Gabriel into Dracula. From the perspective of the characters in-game, it actually makes a certain amount of sense. Alucard is Dracula's son (in the original continuity). Dracula has a son here, too, so if that son is going to end up as a vampire, why not make him into Alucard. There's a certain logic behind it.

We are, of course, still entertained by the fact that Alucard was the name of the character in the Universal picture "Son of Dracula", even though it later turned out (in that movie) that Alucard was really Dracula (the one and only) -- it was just a nom de plume he chose to try and get the townspeople off his back (amusingly, they saw through it pretty quickly, since it's just "Dracula" spelled backwards).

Fans of the original continuity might still be irked by the changes made in the Lords of Shadow series (making Trevor and Alucard the same person instead of two distinct characters), but at this point we're all just learning to cope (and writing fan fiction where the two sides of his personality are split into two distinct characters -- it could happen!).

The inclusion of Sypha Belnades is a nice nod towards the original continuity. She doesn't get to do much, though (she's not playable, and she doesn't do much in the way of the usual Belnades magic). Really, she's just there to hang out, have a kid, and then meet the same gruesome fate every wife-character in a Castlevania game seems to meet now. Not a good trend, Konami.