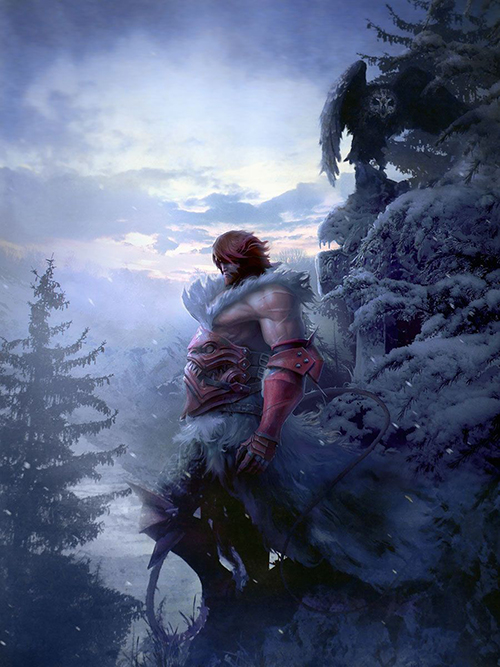 Having spent the last 30 years training for his own revenge against Dracula (Dracula having sent his minions to attack the headquarters of the Brotherhood of Light, where Simon's mother, Sypha, was killed in the crossfire), Simon Belmont headed off towards Dracula's castle to rid the land, once and for all, of the vampire's evil presence.

On his journey he had to face the hordes of the undead in the village on the outskirts of the castle. After surviving the zombie attack, Simon discovered a secret, underground entrance into the castle. Guided by an enigmatic creature called the Lost Soul, Simon explores the castle looking for his father's Combat Cross (a replica of the original weapon Gabriel Belmont used). During this part of his journey, Simon encounters the Toy Maker, who attacks the hero with evil puppets (not the most ridiculous thing to ever happen in a Castlevania game).

Simon, though, was saved from the marionette horde (never thought we'd get to write that before) by a mysterious figure. The unknown man ran off, leaving Simon on his own to explore further. He did find his father's whip, but had to battle the Necromancer (the shadowy lieutenant of Zobek featured in Lord of Shadows). Although the Necromancer tried to claim the whip, Simon was able to defeat him and secure the Combat Cross.

Meanwhile, the mysterious figure was on a journey through the castle as well. He was actually Alucard (aka Trevor Belmont), having awoken earlier in his grave with no memory of his past. The Lost Soul (ever the helpful maguffin) showed Alucard his fate. With the knowledge in hand, Alucard swore revenge on his father (sure, why not?), and went into the castle to confront the Dark Lord.

While Alucard climbed up the tower a second time to fight (and eventually defeat) the rebuilt Daemon Lord, Simon battled deeper into the castle as well, eventually facing off with the Succubus. The dream demon attempted to seduce Simon and lock him away in the world of dreams and nightmares, but Simon was able to resist her charms and shatter her dream reality. Free of the seductress, Simon discovered that he was in Dracula's throne room. Warrior and villain, though, were joined by Alucard. The two vampire hunters took on Dracula and were able to defeat him, presuming that they had rid the world of his darkness.

While the castle crumbles, the two heroes go their separate ways, Simon not knowing that Alucard was actually his father. Dracula was dead and buried, but the only question (which, of course, the first game raised) was simply for how long?

So yeah, even Simon get's into the game, now 600 years before his counterpart in the original continuity. Despite the time difference though, this Simon comes across as the least changed of the new-continuity characters. Sure, he's the son of Alucard and Sypha Belnades, but that's not so big a stretch. It was always hinted (in Castlevania Legends) that Alucard was an ancestor of the Belmont clan (after getting lucky with Sonia Belmont). Sypha and Trevor were married in the main continuity, so she was always an ancestor as well. Events were rejiggered, but Simon gets to remain human, a Belmont, and the possessor of a really kick ass whip.

Not mentioned much in the above description of the plot, the Lost Soul makes repeat appearances through Simon and Alucard's quests. After Simon helps to heal the Lost Soul, the weird creature just vanishes. There's no report of him having a further quest in Lords of Shadow 2, so it's unclear if there was more to his quest, why he even cared, or why we should really care. Supposedly he represents the fate of the four main characters, but that mostly just sounds like a way for Konami to explain away their need to give the characters a guide through the game. A quick hand-wave, if you will.

For the record, this portion of the game is actually most of Mirror of Fate. While it takes place, chronologically, last in the game, it actually comes before all but Gabriel's prelude mission. Simon get's the first full act of the game, while Alucard takes up the brunt of the second act. Realistically, trying to cover this game in a chronological fashion is a real pain in the ass.