Now we reach the final section of the Lords of Shadow saga. Glimpsed at the end of the first Lords of Shadow game, we see the future of Dracula's Castle, now set within Castlevania City. Dracula, freshly arisen and still weak, is visited by Zobek. Needing assistance, Zobek begs Dracula for aid against the forces of Satan before it's too late and the world is plunged into an apocalypse. 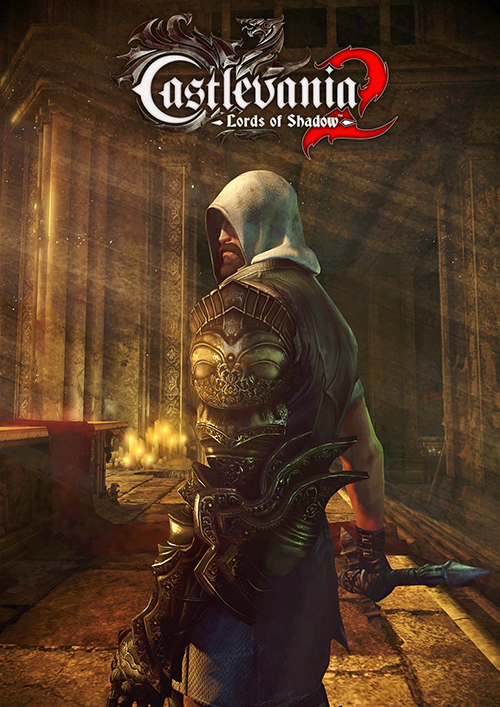 Now the events of the second game fully take place. Dracula, weakened, tried to fight the forces of darkness but is easily defeated. However, after feeding on a family, he steadily begins to regain his power. Exploring through the science district of Castelvania City, Dracula is transported into his old Castle (a vision of the past), where is is able to track down and find the Void Sword, a magical weapon he will need for his journey. He is able to use his sword to defeat Raisa Volkova, an evil scientist who had developed a demonic plague to spread across the world.

Dracula is then able to explore through the old castle dungeons, defeating the gorgon sisters that live within (including Medusa, making a return appearance in the series). Even though he retrieved the next item he needed to fully regain his powers, the Talisman of the Dragon, Dracula is still to late to stop the demonic virus from being unleashed -- Raisa Volkova had already done that before her defeat, turning the denizens of Castlevania City into ravenous monsters.

Forced to cross the city on foot, battling monsters the whole way, Dracula is able to infiltrate the Bioquimek facility in an attempt to find a cure for the virus. He finds the cure, but while riding a private train out of the complex, the train is derailed by a demon. Dracula and the demon battle, with Dracula prevailing, but he's forced to find an alternate route. However, he's then transported into another vision of the past, this time seeing his long-defeated foe, Carmilla. She tricks him into accepted an offer of blood, and soon she has Dracula at her mercy, weakening him while she slowly absorbs his power in an attempt to take over his body and live again. Dracula, though, is visited by a vision of his long-dead wife, Marie, who valiantly sacrifices herself so that Dracula may feed -- his power keeps the castle, it's denizens, and all of Castlevania City alive. Fully re-powered, Dracula and Carmilla eventually do battle, with the vampire lord besting the vampiress and ruining her plans.

From here, Dracula is able to explore his castle once again, finding foes and allies alike. Within the castle Dracula works to rebuild the Mirror of Fate, having to fight (and free) his old ally, the Toymaker. Dracula is able to mostly rebuild the Mirror, but he has to find one more foe, in modern times, who has the last shard. Exploring the church yards near by, Dracula is met by a man who fights like he once did when he was human. The two battle, and then both fall into an underground cavern. There it is revealed that Dracula's current foe is Victor Belmont, heir to the clan and current leader of the Brotherhood of Light. The two factions, Dracula and Brotherhood come to a truce, with Dracula handing off the cure for the monstrous plague. Sadly, Victor is soon killed by one of the acolytes of Satan, but not before getting Dracula the last shard of the Mirror that he needs.

Sadly, his own Castle doesn't want Dracula to regain his full powers and send a dark version of Dracula, a doppelganger, to battle the dark lord and subdue him. Dracula is able to defeat the shadow version of himself, in the process regaining his bat-wings, allowing his great mobility in the battle.

Now, more powered up, Dracula ventures once more into the past where much of the previous events (in 1547) are revealed to him -- how the plan to lock him away for 500 years was devised by Alucard and himself, that the power of Gabriel Belmont was needed to defeat Satan when he finally came to Earth, and that only Gabriel Belmont could defeat all the darkness in the land (including the demon lord Dracula). Two two concocted their scheme, knowing full well that the sword Alucard used to put Dracula to sleep, the Crisaegrim, would fracture his memory. The back in the present, Alucard revealed himself , aiding his father is regaining his memory and power so the two could defeat Zobek and Satan.

Sensing the full power within Dracula, Zobek then revealed himself as Death, the Necromantic Sorcerer. As always (for a Castlevania game), the battle with Death proved difficult, but by this point Dracula was more than up for the challenge.

Now ready for the final battle, Dracula and Alucard confront Satan. Together they defeat Satan's last servant, the Leviathan, but Satan still had once more trick up his sleeve. He possessed Alucard, forcing Dracula to fight his son. But Dracula was willing to go as far as he had to to defeat Satan, including his own son, and sensing this, Satan fled Alucard's body, taking on Dracula in one final battle -- one the vampire lord was fated to win. With Satan defeated, impaled by the only thing that could kill him -- the Vampire Killer -- Dracula emerged victorious. He revived his son, then smashed the Mirror choosing to make his own fate instead. He then walks away, failing to do the last thing he agreed upon all those years ago...

He doesn't kill himself, instead leaving his dark power to continue to spread across the land.

Although we state that this whole game takes place in 2057 AD, much of the adventure actually happens in visions of the past. However, trying to construct a timeline that has Dracula bouncing back and forth between time periods, when they're all really fueled by actions in the future, is just silly -- easier to note that the visions happen, but the game takes place, for all intents and purposes, in it's own present setting.

This game is the last part of the Lords of Shadow saga, as it's come to be known. Although the game ends on a bit of an open ended note, with Dracula remaining alive to menace the world further, no future games are planned for the series. The main antagonist, Satan, is dead by the end of this game, and that's enough of a conclusion for Konami to end the series.

It should be noted, too, that so far no other Castlevania, Lords of Shadow or otherwise, has been announced so who knows if the series will ever see another game after this.