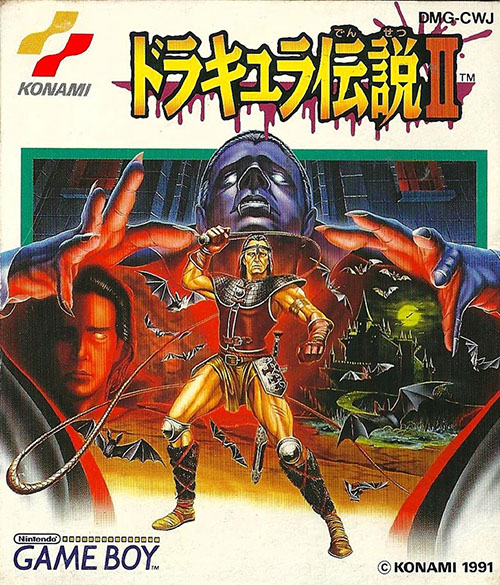 It had been 15 years since Dracula's defeat at the hands of Christopher Belmont, and the land had been relatively peaceful (as much as any land populated by the creatures of Hell can be). Christopher had gotten married, had himself a kid, a boy named Soliel, and watched his son grow into a man, one who could one day (perhaps) take over the family's duty to protect Romania.

One day, however, Soliel disappeared. On that same, fateful day, four mystical castles appeared. Fearing somehow Dracula was behind both events, an older, more grizzled Christopher picked up his family's mystical vampire hunting whip, the Vampire Killer, and set off to the castles. The four were each populated with monsters, but the hunter, armed with his whip, proved more formidable, taking out each castle, and its master, in turn.

Upon the destruction of the four castles, Dracula's own fortress appeared atop the Borgo Pass, sitting there just as it had 15 years earlier. As with his last adventure, Christopher once more fought his way through the demon fortress, taking on the creatures within and battling Dracula's worst fiends. At the top, where he expected to encounter Dracula, the Belmont instead faced his son, Soliel. They boy had become possessed by the Dark Lord's essence and turned against his father, attempting to take the life of the elder Belmont.

Christopher and Soliel fought, and the battle raged fiercely, as they were two well trained warriors battling to the death. Christopher won, and managed to banish Dracula from his son's body before he had to kill the teen. Freed of Dracula's presence, Soliel told Christopher about Dracula's plans, about how Dracula had escaped from the battle 15 years ago, nearly defeated and forced to rebuild his power. Dracula planned to use the power of the masters of the four castle to rebuild his body and reclaim his role of lord of the realm.

Knowledge in hand, Christopher fought through to the true keep of the fortress. There, finally, Christopher fought against the deadly shade of Dracula. Although the Dark Lord fought as well as he could, Christopher gained the upper hand, defeating the demon and sending him back to the depths of Hell once more. Father and son the fled the castle, watching from cliffs nearby as the castled crumble once again. With Dracula dead, the lands returned to their (comparative) levels of peace, and Christopher was assured that, one day, his son would be able to take on the Belmont mantle and keep the lands safe.

Although not the first direct sequel to a previous title (Castlevania and Castlevania II: Simon's Quest having been the first), this title is one of the few direct sequels in the series. Although officially titled Castlevania II: Belmont's Revenge in the U.S., the game is most often referred to as Castlevania Adventure II to show it's sequel status. It's unknown why the Adventure portion of the title was omitted for the English title of the sequel.

In the game, the big plot point is that Dracula possesses Soliel, using the child as a vessel for his demonic essence. This is another instance of this happening, where he uses a young person to serve as a vessel for his own resurrection. One could assume that, given enough time, Dracula would have fully possessed the teen, taking over his body completely. Although, if Dracula were willing to wait he could have just let the necessary 100 years come to pass so he could have naturally risen. Clearly, Dracula's real problem is that he lacks patience.

The game refers to the fact that Soliel would have his own battles with Dracula, implying further sequels in the "Adventure" series. No further games were made set in this era of the timeline, though, leaving Soliel with just the promise of adventure, but no actually battles fought that we know of.

As mentioned in the Castlevania Adventure timeline article (1576 AD), a comic book adapting Christopher's story was released. Titled Castlevania: The Belmont Legacy, in a way the comic sort of served as a prequel to this game, focusing on the marriage of Christopher and a woman we could assume would be Soliel's mom. That said, the events in the comic really don't tie well into this game (or the previous adventure), and the whole affair is quite the abomination in general (a travesty of storytelling and dialogue).

More information is provided elsewhere on the site, but we don't recommend anyone tracking this oddity down. It's really bad.