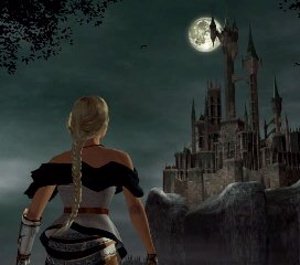 Editor's Note: the following article is entirely non-cannon. Castlevania Resurrection was a canceled game for the Sega Dreamcast. Its story is preserved here, in the most appropriate section of the site, but as the game was never released, it holds no place in the official continuity.

In the year 1666, during the time of the Great London Fires, dark magics had been aligning. Those who worshiped the Dark Lord, resurrect Dracula, prepared their rituals, preparing for the right time to resurrect his unholiness. These dark magics, under the control of the Countess Carmilla (presumption here, as all the media for the games called her "The Countess" -- unless she was a new character, though, Carmilla is the best fit for this role), were prepared, with the Black Mass ritual cast.

During the ceremony, Carmilla used these magics to distort reality and bring about Dracula and all his minions to the plains of man. This was in the lands of England, and not their usual placement atop the mountains of the Borgo Pass, but heroes had appeared in Romania many times before and the countess wanted to avoid their unwanted intervention this time around. The stage was set, and with Dracula's castle having appeared in London, it seemed as if this time Dracula's reign of terror would finally be achieved.

But the forces of good (call them the Powers That Be, if you will) had also come together during that fateful time. To fend off an invasion of Dracula and his ilk, they summoned two warriors to 1666 from across the time-stream: Sonia Belmont, warrioress and accomplished vampire killer, who had defeated Dracula two centuries prior, and Victor Belmont, soldier of fortune and reluctant heir to the clan. These two were bestowed with a quest to venture deep into the newly conquered lands of Dracula, defeat Carmilla, and send Dracula back to the Hell from whence he came.

During the journey through Dracula's castle, the two heroes learned more about their quest, and themselves. Sonia would find the answers to why she was resurrected long after her own time (and her death in that time), while Victor would find the courage to face the past he ran away from, never wanting to be a Belmont hero but having been forced into the role despite his wishes. These two worked together to take on the many threats within the demonic halls, finding the many dangers difficult but not impossible to surpass.

In the end, as stronger, better heroes, the two defeated first Carmilla and then Dracula. London was saved from the blight of Dracula's magic, and Dracula's castle crumbled to dust, sent back to its natural home (the Chaotic Realm) until it would once more rise in Romania (a short four years later, which in the Castlevania series has to be some kind of record).

Speculation and rumors have it that Sonia's quest through the game would have been told as a direct sequel to her only other title, Castlevania: Legends (set back in 1450 AD). How that would have worked, and if Alucard would have made yet another appearance (to hit on any blond he could) is less clear.

Meanwhile, Victor's quest would presumably have been full of him talking about how he never wanted to be an heir to the clan, having run away from home at an early age. Presumably he wouldn't have even used a whip, having other skills and powers he picked up during his time abroad as a soldier of fortune. Victor is one of the great unknowns about a game that already has little information published about it. The most information we have about him is actually in relation to his Lords of Shadow self, but naturally that's a different character that simply shares the same name.