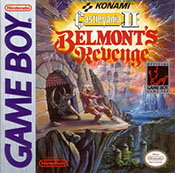 It's been fifteen years since Dracula was defeat (at the end of The Castlevania Adventure), and Romania has experienced relative peace (well, at least from the hordes of the undead). Two events, though, cause Christopher Belmont (hero of the previous Game Boy adventure) to come out of retirement: his son, Soliel Belmont, has disappeared right around the same time that four mysterious castles appeared around Romania. It's up to Christopher to explore these four castles and solve the mystery of their existence and how it all ties into his son's vanishing (spoilers: it's all about Dracula).

For those that have played the original Adventure, the question you might be asking yourself is, "did that crappy Game Boy game really deserve a sequel?" Well, to be fair, the Game Boy made great money (printed it, really) and just about every series needed to have regular releases on that system so as to get a piece of that glorious cash. Konami was no exception to that rule, cranking out pint-sized adventurs of all their big titles to cash in on Nintendo's success, and while the first Castlevania Adventure might not have been the biggest hit (at least critically) it still brought in enough money for Konami to consider a sequel a worthwhile endeavor.

Whatever the reason for its existence, Belmont's Revenge proves itself to be a worthy entry into the series. Most everything that was wrong with the first game was fixed, and enough improvements were added to make this one of the essential entries in the Castlevania series (Game Boy or otherwise). Whether fans felt a sequel on teh Game Boy was needed, Konami more than proved they could redeem the pint-sized adventures and win back the hearts and minds of fans.

The first and most interesting feature added to this game is that it allows you to freely choose your path through the game (even more-so than in Castlevania III: Dracula's Curse, this title's direct predecessor). When you first enter the game, you're greeted with a shot of Romania with the four mysterious castles. You can go through those castles in any order, giving you a chance to try your luck at any of the challenges there -- and get better as you see fit. If you find one castle to be too challenging, try a different one -- each has its own challenges to trip you up, and each will teach you different skills you need for your journey (as a player that is as there is no "power" benefit to picking the castles in any particular order, unlike in a Mega Man game, for example).

The move to four different areas also shows the next improvement over the pervious game: each area feels different; they have their own graphics, their own style, their own music. Your aren't playing through four "samey" levels, but very different, fully realized locales.

And while we're on the topic of the music, Belmont's Revenge is packed with winners. Admittedly, I'm a hardcore Castlevania fan, but the whole of this game's soundtrack is regularly on my playlists (mixed in with a variety of techno and modern rock -- I have an eclectic mix). "New Messiah", "Ripe Seeds", "Praying Hands", and "Psycho Warrior" are all glorious tracks inspite of -- or maybe even because of -- their "plinky" nature. Certainly the limits of the Game Boy sound-system forced the composers to work within limited means, and they did so gloriously ("Ripe Seeds" being my personal favorite).

Meanwhile, the actual game play of the title has been eased up and improved. Christopher of course comes armed with his whip, and he can upgrade it as before until it spits fireballs as he slings it. Thankfully not every enemy will cause a whip downgrade this time, only specific orbs slinged by specific enemies, wo the whip upgrades feel substantial and useful. This, coupled with the inclusion of sub-weapons (the holy water and the axe in the U.S. version, with the axe being swapped out for the cross in the Japanese release), means that Christopher is much more capable of taking on the hordes of Dracula this time around.

The challenge has also been downgraded some (not too easy, mind you, but still more managable). Where the original title was a lesson in frustration between nasty enemy placements and unforgiving jumps, this sequel pulled back on the unfair traps and pitfalls. You're still likely to die, and die regularly, but where the original game pulled nasty tricks that made gamers want to throw their Game Boys, Adventure II's difficulty is balanced and earned. When you die you know it's on you and not the game, and certainly the path to progress is much easier to see.

As a bonus, with a simple password, players can unlock an "Easy Mode" in Belmont's Revenge -- certainly an essential feature for any sequel to the punishingly hard Adventure. I'm not saying you'll need it -- again, Belmont's Revenge isn't as hard as its predecessor, although it is still quite difficult -- but if you like having a chance to make it through games, an Easy Mode is a welcome inclusion. I certainly used it on my first time through the game and I appreciated that I could see much more of the title and experience the many pleasures without having to suffer white-knuckle torture over and over again to achieve it.

Regardless of your feelings towards the original Castlevania Adventure, Belmont's Revenge improves on it and refines the basic engine from the first game to a point where it does what seemed impossible: it makes an Adventure game that's fun to play. Where the original is often brushed aside by fans as a failed attempt to translate the series to the tiny Game Boy, Castlevania II: Belmont's Revenge is a worthy successor to the series and a contender for many Top 10 best Castlevania games. That's quite a feat for a sequel to such a hated first adventure.

A color version of Castlevania II: Belmont's Revenge was released in Japan and Europe in 2000 as part of the Konami GB Collection for the Game Boy Color. From all reports the game played exactly the same as its original Game Boy edition, just with color graphics.