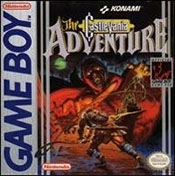 Over a hundred years before Dracula ransacked Romania, and was thankfully stopped by famed vampire hunter Simon Belmont, Dracula had hatched a similar plan to try and rule the world (Dracula being a strong, if uncreative, tyrant). Withthe evil vampire ttempting to take over the world (or, at least, Romania first), it was up to a previously unknown, but just as tough, vampire killer to take up the whip: Christopher Belmont. Through four grueling stages, Christopher had to whip-slash his way though the deadly foes attempting to kill him, all so he could face off with the demon lord and save the day.

As you can probably tell, The Castlevania Adventure (also known as Castlevania: The Adventure) is as light on plot as its NES predecessor, Castlevania. It is, also, as tough, if not tougher, than the original game in the series. This was a short game that, like many titles of the 8-bit era, made up for its brief stage count via hard-as-nails difficulty to drag out the play experience. If the kids took hours to finish the game because it was impossible that was still "money well spent" as the theory went.

The game's difficulty came from a number of factors. For one, Christopher's whip can be upgraded (even getting a little fireball at the top-level of whip wielding), but any contact with enemies will knock his whip-power back a level. It's common to play through entire stages always losing your whip upgrade soon after getting it, and having to fight everything with a leather whip. You then have to add to that the fact that the whip is your only weapon for the adventure. There are no subweapons in this game, so don't expect to have an axe, or even a dagger, to aid you when you take that expected hit and are stuck back with a leather whip.

To help balance this out -- in theory, anyway -- hearts are still in the game, and they'll refill your energy meter. Sadly, enemy hits aren't normally what will kill you; it's all the pits and spikes and mistimed jumps that will do you in. The platforming challenge is pretty intense on its own, and when you stack on the fact that slow-down is a regular occurance in the game (as early Game Boy games regularly ran into memory issues), you probably should just expect to see Christopher take a nose-dive on a regular basis.

Of course, other issues with the game aren't as severe. Christopher is slower than Simon, but controls about as well (for better or worse) as his NES decendant. The graphics are similarly unremarkable, evoking (at times) a good ambiance, if limited to similar "samey" sprites for all the stages (again, due to the limits and memory issues of early Game Boy cartridges).

But hey, one bright part of the game is certainly the music. Game Boy music is admittedly "plinky", but even with the small amounts of instruments available, the sound designers managed to kick out some very listenable music, with "Battle of the Holy" and "Revenge" being stand-out tracks. It's a good thing the tracks are so good because you'll hear them over and over again as you die repeatedly in this brutal adventure.

It's obvious, when playing the game, that the designers wanted to deliver a Castlevania-style experience, but whether due to memory limits, a lack of experience with the Game Boy platform, or maybe just tight deadlines, the game they were able to deliver was highly compromised and rather unbalanced. For the Castlevania fan that needs to play everything, Adventure is worth a quick playthrough (or a purchase in a used-game bargain bin). There just isn't any reason to recommend this game to a more casual fan of the series; there are better, less brutal game to sink one's teeth into in this series. The Castlevania Adventure tries but fails to deliver the proper (and properly balanced) Castlevania experience fans expect.

A color version of The Castlevania Adventure was released in Japan and Europe in 1999 as part of the Konami GB Collection for the Game Boy Color. From all reports the game played exactly the same as its original Game Boy edition, just with color graphics.