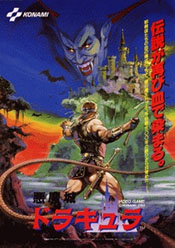 Dracula is a bad man. We all get that. If he is allowed to go unchecked, the world will fall into darkness (cats and dogs sleeping together, yada yada). So our hero (presumably Simon) should have all the motivation he needs to get the job done. And yet, instead of taking out Dracula, our dude's getting married. Well, as far as he's concerned, Dracula just won't let that stand. He kidnaps the woman and taunts Simon into coming to kill him.

Or maybe Dracula just knew Simon would never finish this quest, and wanted the girl all for himself. Considering the sheer difficulty of Haunted Castle, one of the first forays for the Castlevania series into arcades, this is a possible outcome.

Haunted Castle is a bit of a strange game, even in a series that went from Castlevania to Simon's Quest (with a little stop off in Vampire Killer). It's a big, tough, balls-out adventure/beat-em-down hybrid that features a hulking Belmont (presumably Simon) battling against wave after wave of Dracula's worst minions, all for the hope that he can make it to the end of the stage (let alone the end of the game). Stages are long, brutal gauntlets of near unavoidable damage, and with only a single life to get through the game (and limited continues), you'll be lucky to see the end of the first stage (I know I barely did first time out).

The biggest issues is the aforementioned size of Simon. The man is, quite honestly, a beast, giving the power-up versions of the brawny guys from Altered Beast a run for their money when it came to steroid abuse. With as tall a guy as you control, trying to get him to dodge damage as all manner of hits come swooping at him is near impossible. If a human were capable of throwing an arcade machine, this would be the game to prove it (throwing your keyboard while playing this game on an emulator is possible, although not recommended).

It's also just not that innovative of a game, even for as early into the series as Haunted Castle appears. Simon is back to traversing a castle, mostly in a single direction, with his whip and a collection of sub-weapons. If he dies, he has to continue, and after three continues, it's back to stage one for another attempt at glory. This is quite the step back from Simon's Quest, and almost a regression past Castlevania, since the castle isn't even nearly as interesting or twisty as in the first game.

Graphics wise, Haunted Castle is unremarkable. While the sprites are larger, allowing for more detail, the animation is stiff and clunky. More colors are available for the graphics, but nothing really looks good -- it's a lot of large, bland graphics. Unlike the NES iterations, Haunted Castle doesn't try to make the best of what it has to work with -- it just tried to make due.

The music does have a couple of bright points, though. "Bloody Tears" is back in this game, while "Cross Your Heart" is new for this game (and is used again later in the series). Of course, playing through the game long enough to get to these tracks is part of the problem.

With the boom and bust of the arcade industry in America, it's obvious why Haunted Castle never took-off State-side. It's just a wonder that the game ever came out at all. It's not bad enough to make a name for itself on "worst of" lists (unlike Superman 64 for example), it's just not very good. Unremarkable. That's the best way to describe it. Were it not for the Castlevania connection (it was co-developed by the Castlevania team of the time and has many of their marks all over it) it's likely this game would have been long forgotten by everyone.