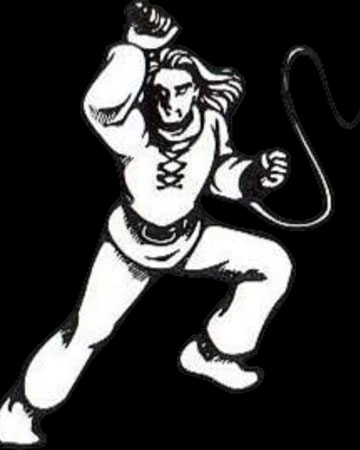 The Castlevania series is packed to the absolute brim with heroes, whip-wielding man (and, occasionally, women) in short skirts who go to Castle Dracula to do battle with the foul demon at the top. These are warrior trained to battle vampires, blessed with the magic to rid the land of evil. They are the heroes of their own stories.

Well, except for one time. In the course of the whole series we have exactly one hero who never had their own adventure, who never fought against Dracula, who never got to prove their mettle as a hero. That Belmont is Soliel (also written as Soleiyu), son of Christopher, and instead of being a hero Soleil actually works as an antagonist against his father. Taken over by thte power of Dracula, Soleil becomes a foe leading the charge to resurrect the Dark Prince and bathe the world, once again, in evil.

It's quite a twist, one that sets a different tone for the second Castlevania Adventure as that game spins its own unique take on the basic Castlevania material. Soliel works as an effective villain, as well as a McGuffin to get the plot in motion, but it's still a little sad that Soliel never got his own game after, never had a quest to redeem his actions later in the series. Hell, even Richter got a chance to play through an alternate quest in Castlevania: Symphony of the Night after getting brainwashed by Dracula in the main game. 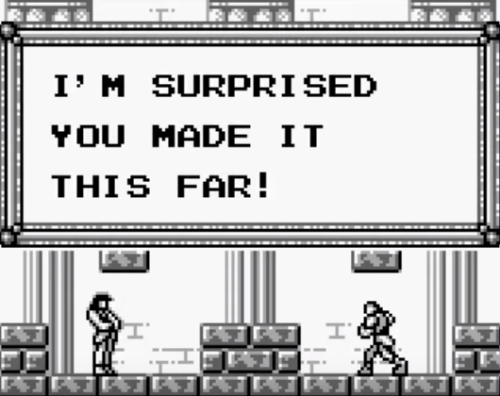 In 1576 AD, Dracula was defeated at the hands of Christopher Belmont. That hero, a vampire hunter and heir to the Belmont legacy, climbed to to top of Castle Dracula and destroyed the Dark Prince... or so he thought. But while Dracula was presumed dead, the spectre of the villain escaped, horribly weakened but still clinging to vestiges of his power. In this weakened state it would take years for the Dark Prince to rebuild his power, and it was the Belmont who gave him a way to once again take a evil grip of the world.

In the years to follow Christopher settled down, had a kid, Soliel, and raised his family quietly in the shadow of the crumbled ruins of Dracula's Castle. On his son's 15th birthday a ceremony was held, a day to celebrate the boy becoming a man and gaining the powers of the Belmont Clan. This was just the opening Dracula needed as, when the power of the Belmonts flowed into Soleil during the ceremony, so too did Dracula pour in his dark magic. Soleil become corrupted, filled with evil energy, and afetr the celebration ended, Soliel disappeared, taken in by Dracula (or, as the Belmont history writes it, "kidnapped by Dracula"). Christopher was shocked to discover his son was missing, but when four mysterious castles filled with evil monsters appeared across the countryside, the hero knew who was behind it: Dracula.

While Christipher grabbed the whip he'd thought he'd hung up and headed out to the castle, Soliel was being seduced by the dark powers of Dracula. The Dark Lord granted him powers and abilities to rival even those of his father, along with a demonic form to truly convey his new, and terrifying, abilities. Thus when Christopher finally made his way to the top of Dracula's castle, having fought through the four other castles to reveal Dracula's final domain, it wasn't the son he recognized but this changed, demonic beast that confronted him. Soliel taunted his father, declaring the time of Dracula's reign at hand. The two battled, with CHristopbher desperate to rid his son of the evil infesting him. Thankfully he wasn't forced to kill his son as, when he'd weakened the boy enough in combat, Soleil was able to shake off the dark magic, reverting back to his human form.

Aghast at what he had done under the power of Dracula, helping the Dark Prince to try and conquer the world, Soliel was repentant. He gave his father the directions to find Dracula and then fled the castle to await his father's immenent success. Soon enough, Dracula was dfeated once more and together the two men, father and son, watched as the castle collapsed back to the ground, the power or Dracula once more sent to the grave.

Soliel's actual story is different depending on which version of the game you picked up and which instruction booklet you read. Between the Japanese version (which emphasized his kidnapping) and the American version (which played up his being taken over by Dracula's power) you had two different tales that change the background of the story. We've taken the liberty of doing our best to go with an aligned version that best represents how this game is viewed not only during its events but afterwards as part of the timeline.

After a bit of opening dialogue against Soliel, the battle will begin. His first move is to throw three swords as an upward angle. These blades will float in the air, spinning for a few seconds, before moving towards the hero. Note, however, they can only move in a single line along the eight cardinal directions so, it's easy enough to stand at a spot where the blades simply can't hit you (from their position) and avoid these attacks. However, Soliel will be actively moving during this time so you'll have to watch out for both the blades and the kid, who will be whipping at you regularly. Use the formation of the room, and the his slow movement, to keep out of reach, landing attacks of opportunity, and the battle should be over in no time.