Although the main meat of Shanoa's quest in Castlevania: Order of Ecclesia takes place in the lands outside of Dracula's castle, the heroine does eventually have to head into the Dark Prince's evil abode. She's tasked there with unlocking the way to Dracula himself, but doing so requires her to battle a series of bosses, both old and new.

One of the new bosses included in the cast is the demonic summoner Blackmore. This fabulous character (seriously, look at the amazing outfit he's wearing) is theorized (by fans) to be some kind of serial murderer. When you encounter the demonic man in the Underground Labyrinth, he says "I will take your shadow!" before attacking you with his own, presumably so he can consume your shadow (and then your essence, as his data entry reads "sustains himself on the essence of his victims' souls"), adding the power to his own.

Sadly, like with many bosses added late in the series, there isn't a lot of explanation for this colorful character. Some have theorized as to the actual origins of the character (rooted in pop-culture, as we'll discuss below), but as to where this character came from in the game's lore, what his true story in Castlevania might have been, is something we'll never know at this point. 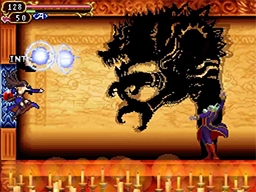 Coming late in the game as he does, Blackmore's fight can test a player as the designers assumed not only that the players have spent time powering up and getting good at the game, thus are looking for a proper challenge. Thus, Blackmore's fight, while predictable, will also test the player due to just how strong any of his attacks can be if they connect with Shanoa. Note, though, that the shadow is Blackmore's weak spot, not Blackmore himself. All the attacks come from the shadow, though, so it's a balance of being close enough to land magical blows (as weapons have no effect on the shadow) while still having room to dance away.

He starts off with a set of basic attacks. He can spit fire balls out, either in a pattern of four (telegraphed by him pulling his shadow way back before launching the blasts) which then fall down in a spread out pattern, or he can spit three fireballs (telegraphed by only pulling back a short distance) which will land in a tight pattern near Blackmore. He can also swipe at the ground with his shadowy claws, or slam the ground with his demonic fists. Finally he can spit out a beam of dark magic low to the ground. Each of these attacks, as noted, are telegraphed so you can tell whether to go to the far corner (for the close range attacks), get in close to Blackmore (for the distant fireballs), or jump for his low to the ground attacks.

After he dips below half health, Blackmore will laugh and change up his patterns; the attacks remain the same, they just come in combinations now. The shadow beast can shoot the fireballs out as a set of three then a set of four. He can also shoot them out as a four pack followed by a claw swipe (so you know how to dodge each of these based on the number of leading fireballs). He can swipe in a combination of three attacks (and you'd jump each of these). And finally he can perform the fist ground-pounds followed by the dark beam. None of these attacks are new, they just are paired up in different ways. As such, in both phases, the best plan is to learn his tells and reacts to all of his attacks. It can be rough going at the start, but eventually you will get it down and Blackmore will become a much easier fight.

It has been theorized that Blackmore derives his name not from any ancient myth or Judeo-Christian demonology, but from Ritchie Blackmore of the British band Deep Purple. Konami has made a habit of naming characters after people from pop-culture, so this could be the case here as well. That said, his look, and the form of his attacks, has been noted to resemble characters from JoJo's Bizarre Adventure, both in his own design and by the powers he uses. JoJo's Bizarre Adventure, of course, is a manga series that spun off into a variety of other media, including, famously, the Super Famicom game (of the same name) that plays like a combination adventure/RPG and is, indeed, delightfully bizarre (which is probably part of the reason it never came state-side).