Coming early in Castlevania: Order of Ecclesia, at the Lighthouse section of the game, this battle is essentially Shanoa against a giant crab. That's really it -- where other bosses in the series have been inspired by mythology or demonology, this boss was inspired by nothing more than Konami throwing just a bit of shade at another game developer.

The creature itself is a giant crab; it's name literally means crab. But what makes it special is that it's a giant crab to poke fun at the "giant crab meme" that was going around at the time. More to the point, it was Sony's presentation of a game, Genji: Days of the Blade, that featured "historically accurate battles" that just so happened to stand alongside a battle against a giant crab. Not exactly a very historically accurate creature to fight, and thus the Internet community threw shade.

Now, some could argue about whether a game released in 2008 (Order of Ecclesia) could really be poking fun at a meme event from two years earlier. That said, game development takes a while, and the designers at Konami probably thought it was funny to put the creature in their game even if the game would take a while to come out and the spiciness of the meme might have faded by then. Plus, crabs are cool and who doesn't like fighting a giant crab? 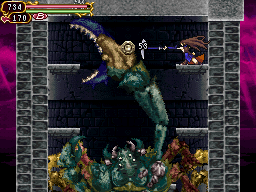 Although Castlevania is no stranger to auto-scrollers -- Castlevania III introduced them to the series and had a number of these kinds of levels in its trek -- Brachyura is the first example of an auto-scroller boss in the series. By that we mean that the boss can't actually be killed by the attacks of the hero but, instead, the player has to wait and time their shots to encourage the boss to, in essence, kill themself.

For Brachyura, who resides at the bottom of an elevator shaft, the goal is to attack the boss not to kill it but to anger it. Everything is based around the crab's giant pincer -- each of its attacks in some way revolve around the pincer, and everything heroine Shanoa has to do is in relation to avoiding that weapon. When Shanoa is on the left side of the room, the pincer will lash out at her. When she's on the right side of the room, the crab will grab the big pincer with its smaller claw, and then tug on it before releasing it so the large pincer slams back at Shanoa. And, finally, the crab can build up energy and shoot out acidic bubbles, forcing Shanoa to dodge around the room.

The crab starts out green, but as Shanoa deals damage to it, it'll turn red. In this angered state, it will eventually lash out, slamming the ceiling of the tall room. Once this happens enough times, the ceiling will break and the next section of the tower will open, moving moving the fight vertically up the building. Then the process repeats. Note, though, that Shanoa will never actually be able to kill the giant crab in this fight -- despite the crab's data saying it has "1800 HP", the crab can never be outright killed. Instead, the last section of the lighthouse features an elevator at the top; all Shanoa has to do is reach that elevator and activate it to ride the elevator back down, catching Brachyura underneath, crushing and killing it when the elevator hits to the bottom of the tower.

As noted, the crab boss is inspired by the meme-worthy presentation given by Sony reps at at 2006 press conference. The representatives from Sony clearly didn't know what they were talking about, working off a pretty generic set of talking points. This also came during the time where the PlayStation 3 was being ridiculed for its price ($599 at the time, a steep price many gamers didn't want to pay), and that, coupled with a terrible presentation, led to much shade being thrown at the reps in general.

The presentation for Genji: Days of the Blade was one of the most meme-worthy sections of an already pretty bad presentation. Sony's CEO Kazuo Hirai and lead producer Bill Ritch, while largely talking about the game, in vague and "synergistic" terms, noted that the title featured "famous battles which actually took place in ancient Japan" right at the moment that a giant crab came up in the in-game footage. That was a hilariously bad moment of timing and, coupled with the already bad presentation (with such quotes as "you attack its weak point for massive damage" and "real-time weapon change", features that have been in video games since video games were even a thing), gave the entire press conference a rather dubious stink to it.

This then lead to the Internet commentariat creating a series of meme images mocking the event. There were also, of course, remix videos of the presentation that poked fun at the various, dubious quotes from the event. All in all, this was not a bright, shining moment for Sony and cast the already struggling PlayStation 3 in an even worse light. When even a game two years later can mock the moment, you know it's an event that should never have happened.

Unrelated, when the game first linked, it included a screen-cap of Brachyura. Fans pointed out that the name sounded like a phonetic, Japanese pronunciation of Blacula. This is, of course, silly as Brachyura is literally the scientific name for "crab", but it did stick for a while as another meme reference for the creature.