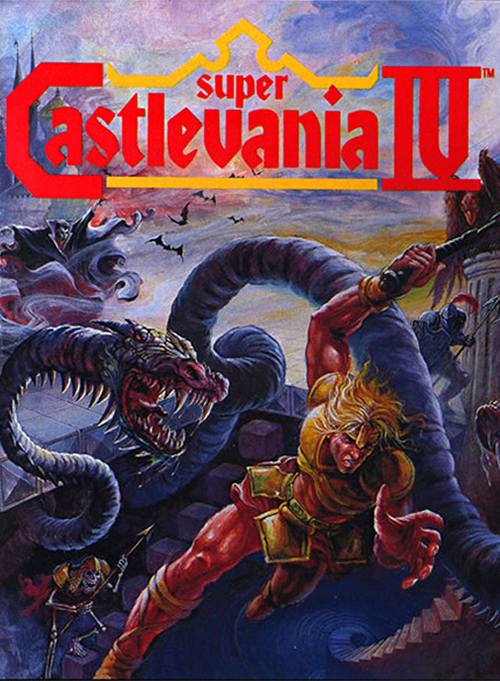 Just one year since Dracula's last death (which makes sense if he was already coming back from the dead at the end of Castlevania II), Dracula once again rose from the grave. The Dark Lord's evil castle appeared on the high mountains of the Borgo Pass, and the foul demons spilled forth into the surrounding lands.

Simon Belmont was again the man on the scene. Taking up the trusty Vampire Killer, Simon set forth into Dracula's castle, the creature of chaos that seemed eerily similar to its previous incarnation and yet, at the same time, featured areas that were wholly new to Simon.

Battling through a new horde of monsters, although with some old favorites (Frankie and Death among them), Simon eventually reached the top of the castle, and there battled against Dracula. In the end, Simon once again walked away victorious and Dracula was committed to the grave (for more than a year, thankfully).

Firstly, this game sits in a nebulous area of continuity. Officially it's always been considered a remake in Japan, at least by Konami, but it's debatable as to whether or not the development team was let in on the fact that this game was to be a remake. In Japan, this story ignores the events of the first two games and states that 100 years have passed since Dracula was last defeated and he has come back again.

The problems with this breezy consideration for continuity are numerous. In the introduction movie for the game, Dracula's grave -- looking exactly as it does at the end of Castlevania II -- is struck by lightning and Dracula's soul (in the form of a bat) emerges. This could just be a reference to the second game, a nice little nod showing the grave he would eventually be interred in at the end of that game... but what that fails to explain is that, if this is Dracula's grave, and that tombstone was there before the events of Castlevania (which this game would replace), why would the villagers repair it? Why wouldn't they simply get a new tombstone instead of repairing the tombstone to its near-perfect finish? Seems a touch fishy.

Also, this game directly conflicts with Castlevania X68000 where, in that game, followers from Dracula bring the dark lord back to life with a Black mass ritual. And yet, here, Dracula just comes back (much as was hinted at the end of Castlevania II). If they are both remakes of the same game, why are they so conflicting in their explanations for how Dracula rose?

And even still, while a couple of bosses recur between the two games, none of them fight the same at all, and levels while similar looking at times, are not at all the same.

So while it's fan speculation (and certainly Konami doesn't agree with us), we here at The Inverted Dungeon firmly assert the fact that this is the third game in Simon's arc.

Sadly, to add to the confusion, for a long while Konami USA considered this game an official sequel and had it listed as such until the series head, Koji Igarashi, had them update to his official timeline.