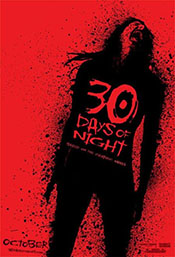 At the literal top of the world, 80 miles from the rest of civilization, rests Barrow, Alaska. As winter peaks, Barrow is treated to thirty days of continuous "night" when the sun doesn't make an appearance at all. Many of the Barrow locals clear out each year, being unable to take the thirty days of continuous darkness. Only a few of the stragglers, workers, and devoted locals stick it through the continuous twilight (the dark kind, not the emo sparkly kind).

One of those locals is Eben Oleson, Sheriff of the town. Eben, along with his soon-to-be-ex, Stella (who is stuck in Barrow for the thirty days), begins to notice strange and horrifying incidents around town -- cellphones disappearing, sled dogs being slaughtered, and an odd stranger coming to town, harassing the remaining locals. When Eben and Stella are attacked, they barely make it back to town. Soon enough, Eben realizes the horrifying truth of their situation: Vampires have come to town, and they're bathing in blood while the sun is gone for thirty days. It's up to the locals to survive the season of darkness before the vampires kill them all.

Having read the original comic book, I had to admit I wasn't expecting much from this movie. While the story in the book was interesting, it wasn't incredibly deep, nor did it seem like it would adapt well as a movie (comic-to-movie transitions always have a chance to be terrible -- for every Batman Begins there's a Batman & Robin). Plus, Josh Hartnett is not an actor that ever impressed me with his skill in front of the camera, let alone his ability to carry an action/horror movie as the strong, male lead.

It's a long preface to say that despite my reticence, the film version of 30 Days of Night is a great movie, although not without its flaws. The part that the movie nails best (and does so better than the original comic book even), is building the tension of the situation. Plainly, going in to a movie like this, the viewer will know its about vampires. As outside participants in the proceedings, we're expecting the vampires to come, and the movie takes care to drop little bits of gore or scares along the way leading up to the big reveal (where the vampires attack the town and the carnage begins). From there, the movie shifts into higher gear, ratcheting up the gore and creepiness. 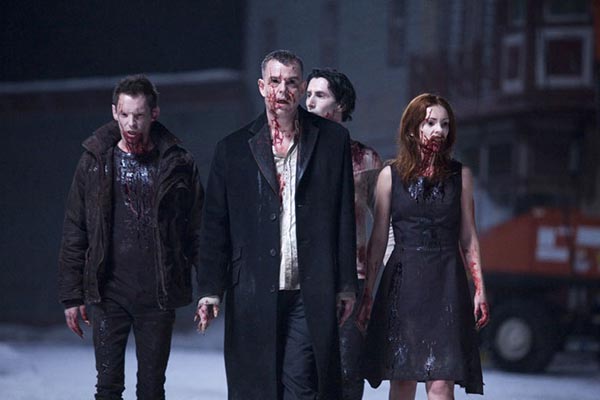 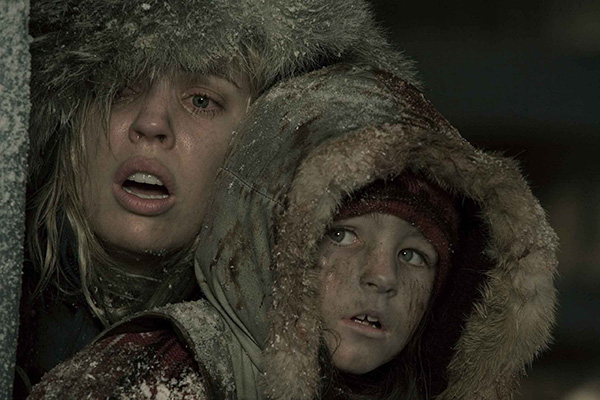 What it really comes down to is that, without a doubt, 30 Days of Night makes vampires scary again. So many movies (and other media) have come about playing up the "tortured soul" aspect of the vampires, making them emotional, sexy creatures (I'm looking at you, Interview with the Vampire). The vampires in 30 Days are not sexy. They aren't tortured, emotional (glittery) teens. They're grotesque. They're cruel. They're animals. And, they're awesome.

Credit must be paid to the director, David Slade (who went on to direct another "vampire" movie, the dreadful Twilight saga's Eclipse, which he hopefully infused with scares and gore). Slade takes the best parts of the comic book -- the fast pacing and gleeful play of blood on the page -- and translates those to the screen excellently. It's his deft hand behind the camera that makes the movie shine -- a lesser director would have made the film feel too schlocky, playing with the cheesiness of the concept of vampires coming to a town bathed in perpetual twilight, but Slade plainly took his job seriously.

The actors don't ever come together as well as Slade and his film, but they do a respectable job, by and large. Hartnett is good at looking pensive or emoting, but he isn't strong enough to really carry the action sequences. We buy him as a Sheriff, but never as a vampire hunter. George is more convincing, playing a strong woman, one who could stand up to someone a little tougher than Hartnett's sheriff. The rest of the cast is sufficient without ever being outstanding. They fill the roles as given, and die at appropriate intervals, screaming the whole time.

But really, in any horror movie, the actors are just blood-filled meat-bags waiting to be killed, and so long as they aren't cookie cutter roles, and the gore is believable, then the movie has done its job. And that, really, is the take-away. If you want a movie with a little character development, but a lot of gore on the snow, then 30 Days of Night delivers. Turn the lights off and spend a little time in Barrow.