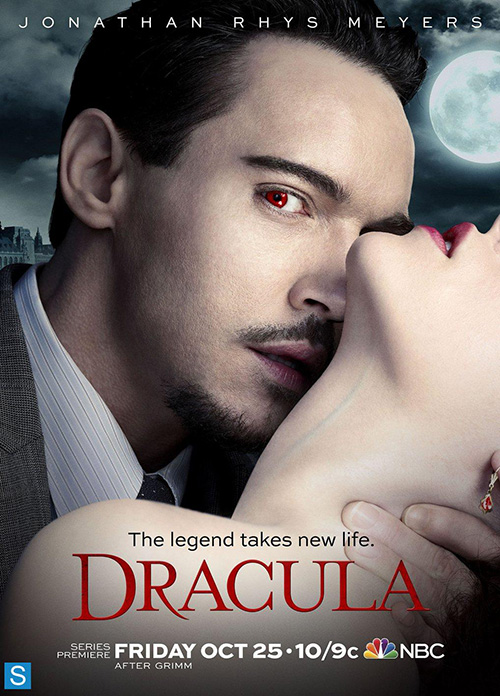 As a monster, Dracula is not normally given the benefit of long-form storytelling. Yes, both Universal and Hammer had their long-running series of Dracula films, but those were individual movies made in a series after the first film proved to be a success. There wasn't a plan for long-form stories and, it's worth noting, each film essentially stood independently. Plot lines did not carry over from one film to the next, and by the end of each movie you could be assured that Dracula was going to die (potentially never to be seen again if it was the last film in the series). What the monster has never had was a chance to feature across a longer story, to grow and shift and change over time, to essentially be the protagonist of his own tale.

It's a curious point to think about, isn't it? Why would the monster be the hero of his own story? He's the monster so, one was presume, he'd remain the antagonist. And yet, as of late, there's been a push to explore the monsters of these tales in greater depth, to view them as characters that can grow and evolve. Universal tried it with Dracula in their (quite boring) 2014 tale Dracula Untold. Netflix recently attempted an exploration of Dracula (although, admittedly keeping him as a villain of sorts) with their 2020 mini-series, Dracula. Heck, other monsters also were viewed as potentially redeemable, as the 2017 The Mummy gave us a Mummy that was a villain as well as one (Tom Cruise) who was the hero.

You can trace a line from those productions back to the 2013 Dracula, which, from this reviewer's perspective, really kicked off this arc for the classic monsters. This series, though short lived, cast the titular monster as the hero of his own story, still a monstrous vampire but also a being who cared, who loved, and who wanted nothing more than to be reunited with his (dead then reborn) wife. Oh, and to visit terrible revenge on the people who killed his wife and put him in a coffin for 100 years (you know, as one does).

Dracula stars Jonathan Rhys Meyers as the vampire, awoken after 100 years by Abraham Van Helsing so that the two of them can plot their revenge against The Order of the Dragon. This order is the one that killed Dracula's wife, burning her at the stake for being in love with the warlord. They also cursed Dracula to be a "nightwalker" and then, later, captured him and imprisoned him in a coffin he could not escape, leaving him there to rot for 100 years. Van Helsing, meanwhile, also was punished by the Order, forced to watch as the organization burned his wife and children alive because Van Helsing crossed the order. These two men, aided by Dracula's personal lawyer, Renfield, want to bring down the Order of the Dragon, destroying them thoroughly so they can never cause their evil again. 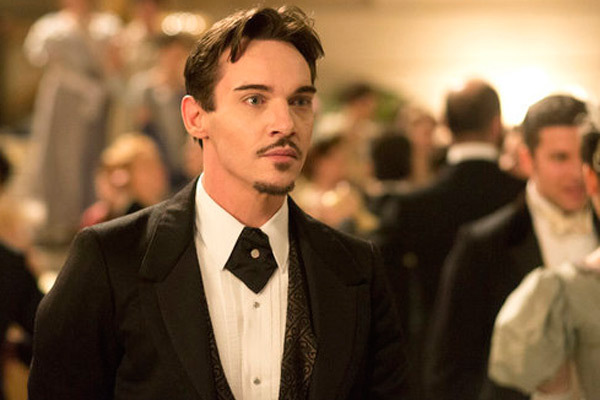 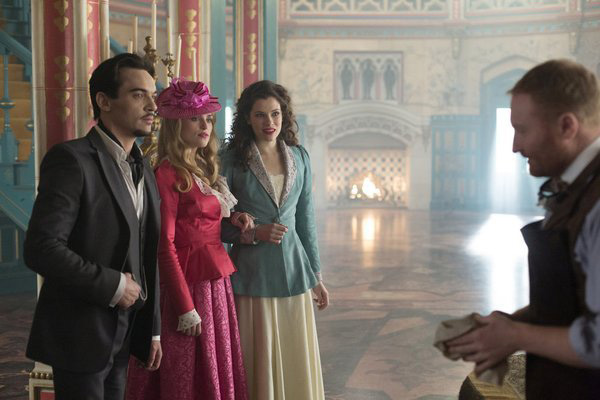 To make this happen the men put a long plan into motion, setting Dracula up under the guise of "Alexander Grayson", an American industrialist recently moved to England. Here, Grayson is pitching his new power source, geomagnetic energy (something Tesla theorized and Edison tried to quash). The Order is heavily invested in oil so if geomagnetic energy can replace petroleum as the primary power source for the isle, it'll cut the Order off from their font of income. Getting in the way of this plan is the order itself, their vampire hunters, and their own devious members. Plus a curious young woman has drifted into Dracula's life: Mina Murray, who looks just like Dracula's lost wife, Ilona. Now the vampire wants to not only destroy the Order but also to win the woman so he can have it all in his eternal unlife.

The love story between Dracula and Mina forms the backbone of the series (and, really, it's a love quadrangle as there's also Harker to whom Mina is betrothed, and Lucy who is in love with her best friend Mina). This, of course, draws its own inspirations from older Dracula productions, such as the 1979 Universal film and the 1992 Columbia Pictures production. The TV show does a much better job with its story than the 1992 film (which isn't surprising since that movie is garbage) but I'd make the case that the romance here is as strong as Universal's 1979 effort. The chemistry and passion between the leads (when they're allowed to unleash it in Victorian society) is palpable, driven by the performances of the leads. The show wants you to invest in Dracula and Mina and it does a great job of getting you there.

Unfortunately the revenge story wrapped around the Order of the Dragon isn't nearly as strong. This is largely because the Order is vaguely setup and never really given any definition or consequence. We know the Order is deeply tied into English society, with paid agents at every level of the government, and they will do anything to stop Grayson and his fancy new tech. What we don't ever get is a sense of what their larger plan may be; what do they want, why are they in England, and how would ruining their plans here impact and organization that, from what we're told, is worldwide and entrenched everywhere? The show clearly wanted a group that was, essentially, the Illuminati (just under a different name) but when they created the Order they failed to think out just what the organization is actually meant to do.

The Order is clearly not directly affiliated with the Church as the Order uses black magic to punish people (like Dracula) and to hunt down its adversaries (such as by employing seers). They don't exist to protect the souls of the world, then, but they also are devoted to hunting monsters. Are they battling someone else (other than Dracula, who they all think is a myth) or is there some greater goal in mind for them? Maybe this is something that could have be elaborated upon in a second season, but sadly the show was canceled after only ten episodes so any greater evolution for the Order was quashed. 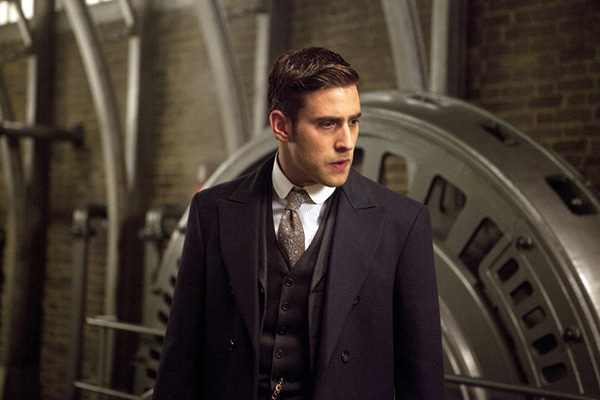 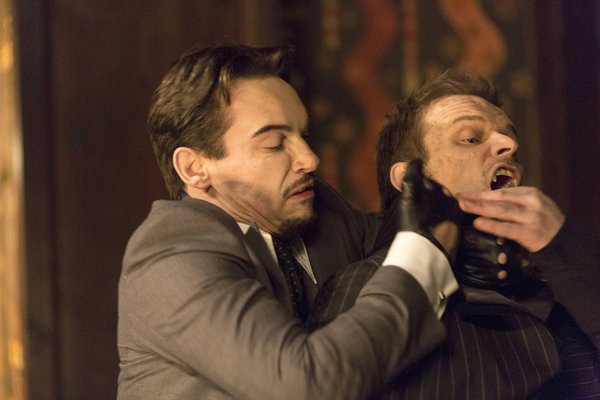 This information would have been vital because, without it, we're left with a group of villains that basically stand around, preen, complain about ruffians in high society, and then get murdered. They don't really do much, simply reacting to elements as they're introduced, and then when confronted with a danger they can't handle, they fold. The Order is pathetic, really, and this is supposed to be the villain that Dracula is so worked up about? Really? I just don't see it.

Even still, the series is great for a single season. Watching Dracula pulling the strings of English high society never gets old, nor does seeing him stalk the night, killing people in bloody fashion. From a production and filming standpoint this series knew exactly what it wanted to do and it gives it to the audience in lush, gory fashion. If the show could have given us a more compelling villain I think the viewers would have stuck around for it. The show was close to being great, it just needed a little more time to cut the cruft (the Order) and focus on the character pairings that really mattered.

Of course, more than anything the series was hampered by the fact that it aired on NBC in 2013. At that point, with the transition of viewers from traditional TV to streaming services, shows were still regularly slaughtered if they didn't find their footing with viewers quickly enough. If this show had come out on HBO, or Netflix, or Hulu, I think it easily would have gotten a second season. Its such a gorgeous, detailed production with a number of very interesting characters. It had a story that could have gotten great and, at the right now, it would have succeeded admirably. Dracula's greatest sin was coming out at just the wrong time for it to survive.