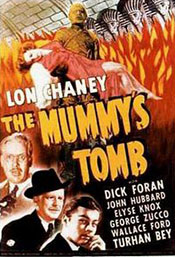 We open thirty years after the events of the last movie. We find our old hero, Steve Banning (once again reprised by Dick Foran), telling (to his sister, son, and son's financee) the tale of his discovery and defeat of the mummy Kharis. Now a widower (as his wife, Marta, died in the intervening years), all of Banning's family is gathered here, in this room. It's important to know this as, soon, they all will have a murderous mummy on their tails.

You see, even though we all thought Kharis dies (for reals) at the end of The Mummy's Hand (which actually featured the whole mummy and not just his hand, despite the title), the Mummy is back, his existence continued by the Priesthood of Karnak. Now, thirty years later, they want their revenge. The high priest sends Mehemet Bey, along with the sarcophagus of the mummy, across the ocean to find the Banning family and kill them all (as the curse on the mummy's tomb demands). Will the Banning's survive or will Kharis finally get his revenge.

Okay, so I get it. The Universal Mummy wasn't (and probably isn't) as well known a character as Dracula or Frankenstein. Writing one of these films probably entailed making sure to provide enough information to get the audience up to speed. You have to explain Kharis, his curse, his need for tana leaves. Doing all that effectively had to seem hard. And yet this movie, which came out only two years after the previous flick, spends 10 minutes (or it's already slight hour-long run time) recapping the original movie. Literally recapping, showing us the same footage we already saw from the first movie, recycling whole-cloth. This wouldn't be so bad if they hadn't made the first movie (so an introduction like this could have worked in a stand-along movie). But when you've already seen the previous movie, this his reeks of laziness.

This still wouldn't be completely unforgivable (it's pretty bad and I found myself shutting off completely during this section as it played) if the rest of the movie were at all imaginative or interesting. Instead, though, what we get is a bland retread of the first movie all over again. 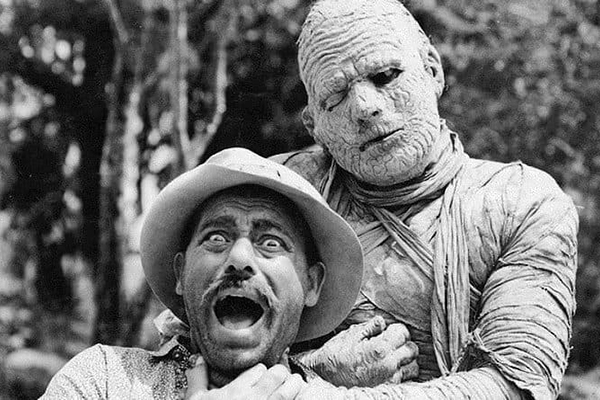 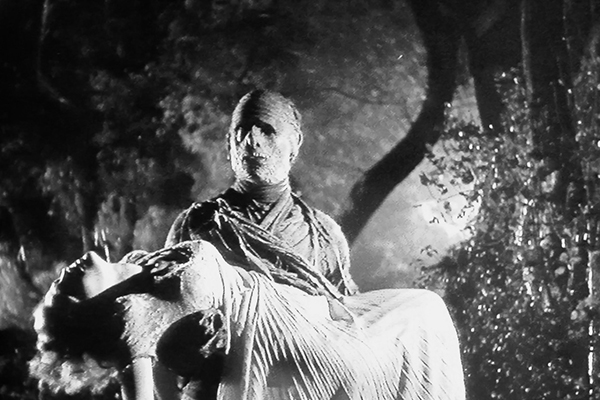 The biggest change in formula is in moving the action from Egypt to America. This helps to reduce the awful racial politics the last movie had even if it doesn't completely eliminate it. We still have an evil Egyptian who's still hard-core committed to killing white people. That's not to say they don't deserve it -- as I touched upon in the review for the last flick, Banning and his partner, Babe Hanson, would be the bad guys in almost any other movie (unless they were played by Harrison Ford) so it's not like we really care if they live or die. Their family wouldn't be as deserving of death-by-mummy except everyone else in this movie is so bland. They don't come across as characters, more like empty vessels to fill the body-count.

And let's be honest, Universal movies of this era do not have great kill-scares. There's no gore and all the violence happens just off screen (with the camera panning away at the last second). I get that there were filming codes at the time that limited what could be shown on screen, so that's why you need an effective villain. Karloff showed how it was done in the first Universal Mummy movie from 1932, but Kharis is hardly in the same league as the other villains Universal created. He's a boring, voiceless, shambling mess with little motivation beyond killing because that's what he does.

Then we get to the questionable reuse of the ending from the last movie. Once again the high-priest decides he wants to take the damsel in distress as his bride for... reasons? Up until now he's shown now motivation to turn his back on his holy mission, nor does he show any interest in the Americans, their culture, or their women. It's like the decision was, "people like watching the dashing hero save the lovely lady." It's silly and robs the movie of any climactic momentum as we already know, from the last movie, the hero always saves the damsel.

In all respects this movie is just a retread of the already tired second movie in the series (sometimes literally reusing that movie). There's nothing in this movie to justify it's own existence and, aside from moving the mummy state-side, there's little that happens in this movie a viewer would need to know going forward. This is, quite simply, a movie that could, and should, be avoided. Save your time and skip this movie.