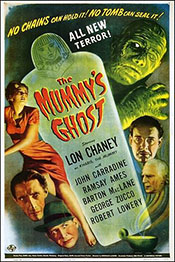 It's been eight years since the mummy, Kharis, was defeated (as seen in The Mummy's Tomb). Having seen their evil plans defeated twice already, the High Priest of Arkam (formerly Karnak) now simply wants the mummy returned to Egypt. To that end he sends Yousef Bey, another follower of the priesthood, to America to retrieve Kharis, as well as the body of Ananka (the mummified princess who dies centuries ago and kind of starts this whole mess, really) and bring them both home.

Things don't play out exactly as expected, though. We're soon introduced to Amina Mansori and her boyfriend, Tom Hervey. While Tom is an all-American guy, Amina is Egyptian by descent, with a past shrouded in mystery (she gets all fuzzy-headed any time the subject of Egypt is brought up). Wouldn't you know it, too, but Amina is Ananka reborn, a new body for the long dead soul of the princess. With this knowledge discovered, Yousef pledges to bring not only the body of Ananka but the girl with her soul back to Egypt. They just have a little murder to take care of first...

Although still not a great movie, the fourth of the Universal Mummy flicks (and the third of this particular on-going series) at least tries to do something a little different. Instead of focusing once again on the Banning family (heirs to the blandness fortune), Ghost focuses instead on Ananka, a side character in the movies before this and one who's tragic past give her more character development than we're otherwise used to from this series. Amina/Ananka is the first character we get who has an actual personality and isn't, in some way, morally compromised. It's a nice change of pace and gives us something to latch onto during the film.

Unfortunately, this is still a Universal movie so while Amina may be the most interesting character in the film, she's not the main character. Of course everything really centers around Tom, all-American slab of boring gentility. It's like the produced figured, "he's white and in college... eh, that's enough character development." While we never doubt for a second that he is in love with Amina (since he says it pretty regularly, their lack of chemistry be damned) he doesn't seem to have much going on otherwise. The mummy lurks, Tom reacts, Amina faints, and then we repeat again and again. 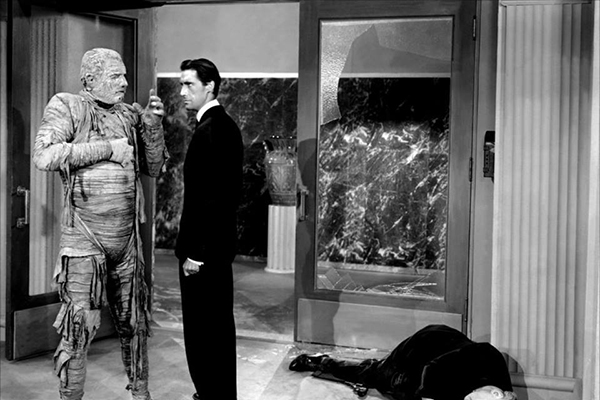 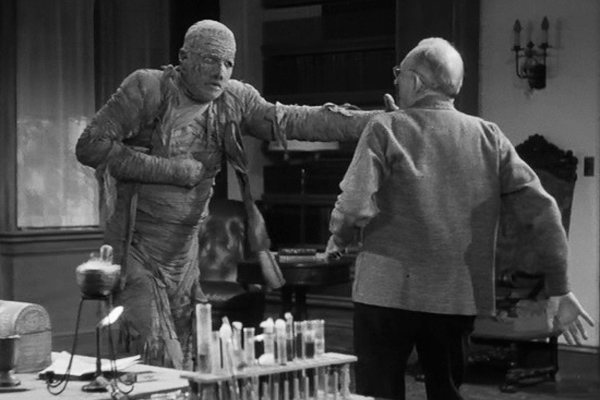 Let's be honest at this point: the mummy, Kharis, is never going to get interesting in these movies. He's still wordless, so a lumbering mess than anyone could easily saunter away from safely (and yet somehow everyone is easily caught by Kharis leading this review to seriously question the intelligence of all parties involved). While the mummy may look scary, in practice he's as tedious as the rest of the movie.

So we have to circle back around to Amina. He story is tragic, the people pushing back and forth for her soul gives weight to her predicament. It would just be nice if the movie could do anything with her other than making her into yet another damsel in distress. We're a long way off from Ankh-es-en-Amon in the first Mummy movie who had her own agency and, in fact, saved herself. Amina never takes any action on her own part, always lead around by the magic in her soul and then carries around as a prize for the mummy. She's betrayed by the writers (and maybe the mores of the time) when she could have been the best character the series has seen yet.

It does help that the writers then again used the "priest falls for the damsel in distress" plot from the last two movies. This was already a tired device in The Mummy's Tomb but for some reason Universal went to that well again. It makes no sense within the context of the movie and further betrays any agency Amina could have had for her own life.

Basically this movie sets itself up to do something new, then gets mired in the inertia of a long-running series. It's better than The Mummy's Tomb, but that's a rather low bar to climb over. If you're really must watch all the Universal Mummy movies you're already committed to watching this one. There are some plot points from this film you'll likely need to know before watching the next one, but on it's own this movie just isn't worth watching. Skip it unless you have no other choice.