Nosferatu: A Symphony of Horror 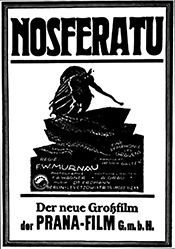 Editor's Note: Before discussing this movie, it's worth noting a couple of quick points. Firstly, due to how old this film is, and the quality and nature of the surviving prints of the movie, the soundtrack heard during our viewing of the movie may not have been the most accurate reproduction of the score. Due to a copyright suit between the Stoker estate and the production company, most prints of the movie were destroyed. Those that survived were in poor condition, and many (all?) lacked a complete score that should have been played with it. As such, most prints of the movie now have a re-imagined score. We did not take the music into account for the final score for this reason, although it's worth noting that the version we watched was almost comically heavy on pipe organ.

Also, while we are using the original names for the characters here, the version we watched changed the names back to the characters from the original novel, Dracula. This is common enough, so depending on the print you watch (if you end up watching this movie) you may see either version of the films. We'll reference the Nosferatu versions of the names in our discussion.

Young Thomas Hutter is sent by his boss, Knock, to the Carpathian mountains to finalize a land deal for an old eccentric, Count Orlok. He has to leave behind his wife, Ellen, but her love sustains Thomas while he's on his months-long journey. His travels take him far, to a remote region of the countryside, and his client, the Count, is stranger than he could have expected. Meeting only at night, the Count behaves oddly, reacting in unusual ways, ways most people wouldn't. The longer Thomas is at the castle, the more he sees. Realizing the man he works for is some kind of demon, a nosferatu (as the locals call him), Thomas flees. In his weakened state (as he's been fed on repeatedly by the Count), he's unable to travel quickly, and he fails to make it back to Germany before the Count.

Now, Thomas's homeland of Wisborg is under a growing sickness, a plague that's killing too many people too quickly. The villagers are distressed, darkness is spreading, and who know how long it will be before all of Germany falls under this deadly spell. Will Thomas know how to save the day, or will even his lovely wife fall for the seductive spell of the nosferatu? 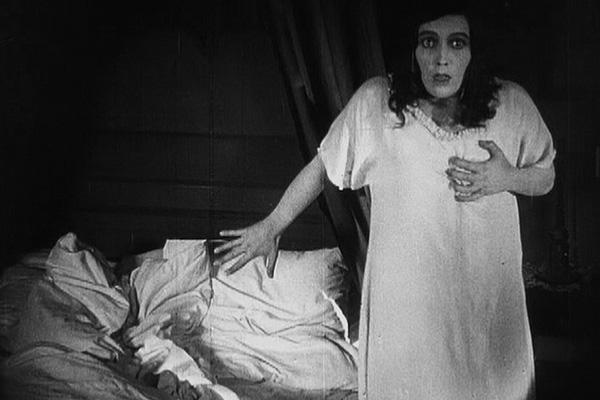 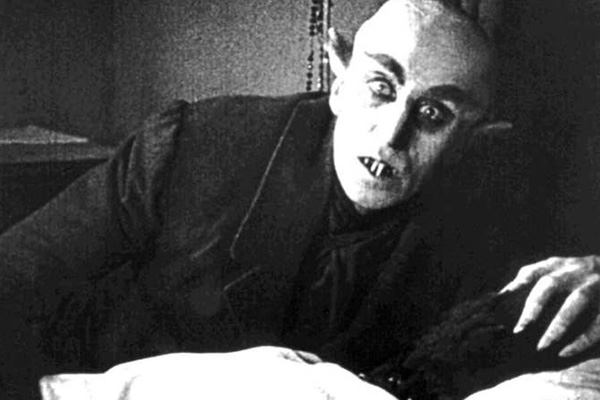 All of that should sound familiar to any fan of vampire literature and film -- it's Bram Stoker's Dracula with the names changed. Like most every adaptation of the source material, the basic beats remain the same -- Harker/Hutter goes to the castle to secure a land deal, is nearly killed by the Count, and then the Count makes it back to Harker/Hutter's homeland to spread his vampiric ways. Changing the names doesn't hide the source (something the production company learned the hard way -- not that the Stoker estate wasn't aware of the production since the company tried to secure the rights before just making the film anyway).

Just because it's a fairly standard adaptation of the source material doesn't make it a bad movie. Although Nosferatu: A Symphony of Horror is a silent movie, it still holds up decently well to viewing in this modern era. What works are the production values and the sense of style -- namely the Count. The vampire shown in this movie is creepy in ways few vampires in film manage. This is in large part due to the elaborate makeup they gave Max Schrek for the film, making him grotesque when most production keep Dracula fairly human looking. This change may ave been made to play up the horror in the silent era, but whatever the reason behind it, it works -- it's become such an iconic style that the word "nosferatu" is indelibly associated with this style of vampire. This nosferatu is an icon, a classic that everyone knows.

We also appreciated one of the twists to the plot not seen in other Dracula adaptations. When Orlok makes it to German shores, he starts killing indiscriminately. Not knowing (and how could they?) that a vampire was in their midst, the people of Wisborg blame the plague. This is a natural assumption, and one that most people would believe. This helps to explain how dead bodies piling up wouldn't draw too much attention, which is one of those things few vampire movies try to take into account. It's a good detail, and we respect the movie more for it.

That said, this is a silent movie, so anyone going in has to be prepared for the pacing of the movie. Namely, this film is very slow. The lack of dialogue doesn't hurt the film too much, but the producer put a few too many written inter-titles into the film, dragging down the pace. Other scenes could probably have been trimmed some to punch up the pace, but then the same could be said about so many silent movies that it's hard to fault the film makers -- it was the style at the time ad you have to expect a slower pace (just like anyone that's watched cinema from the 1970s has to expect a slower pace -- that's just the style for the era). 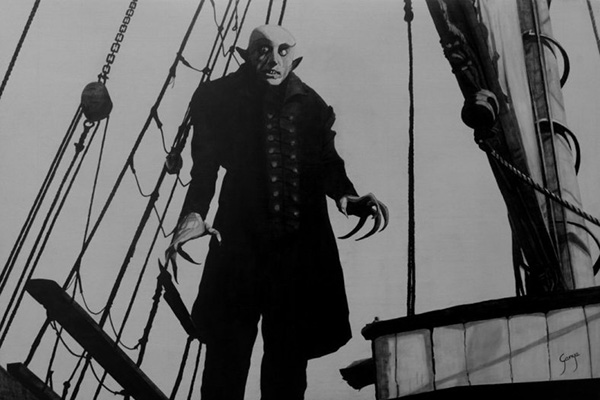 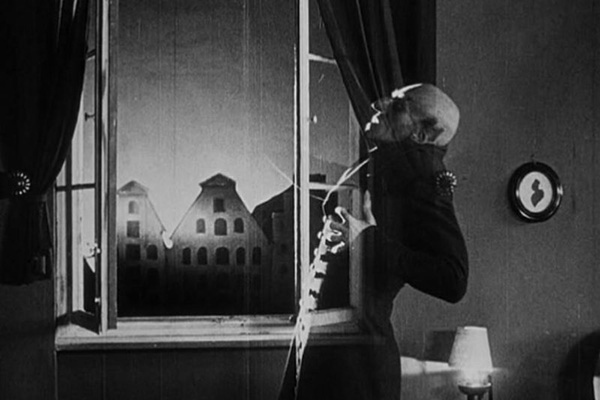 Still, for anyone not accustomed to classic cinema, this is a hard movie to recommend, especially considering the poor quality of most transfers of the film. The acting is decent but not great, with few standout performances, and the pace is a slog at times. For those who love cinema in all its forms, though, Nosferatu: A Symphony of Horror does a pretty good job adapting the source while finding some ways to set itself apart (even if it was the first movie to try to adapt the source material). Any fan of cinema owes it to themselves to see this movie. It's a classic, and one that actually rightfully earns that title.

Produced in 2000, Shadow of the Vampire is a fictionalized telling of the production of Nosferatu. The twist is that the vampire, Count Orlok, is an actual vampire, one the director hired to get the best performance possible. And then, of course, horror ensues. It's a fun lark and a great companion piece to this movie.