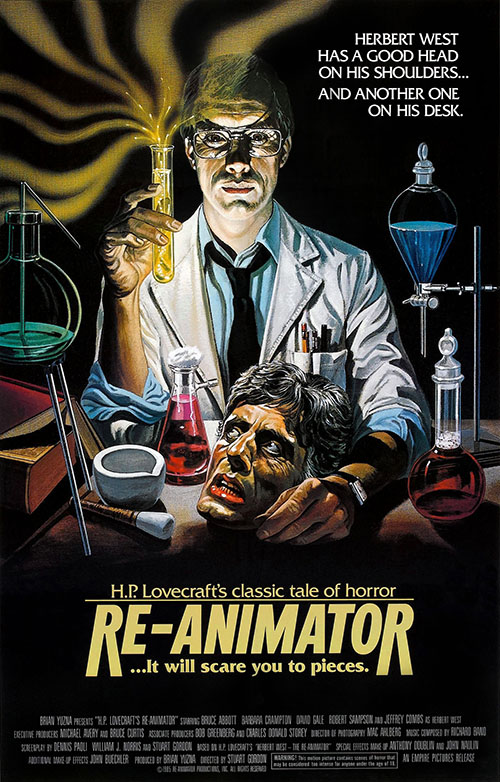 I have to start this by saying that I love this film. I'm pretty sure I've written about Re-Animator at least four times over the life of this site, redoing the review over and over again so I have an excuse to watch the movie (and its sequels). And every time I'm reminded once again that this film is absolutely, awesomely fun. It's gory and disgusting, but it has this sense of fearlessness, of a willingness to follow whatever stupid idea it can come up with for the sake of good horror, and it works, oh so well.

What's tragic, in my opinion, is that the film isn't better known despite how good it is. Sure, it's referenced once in a while, such as in an off-hand discussion in American Beauty, but it's always something brought up in hushed voices, like you're not a true horror fan until you've seen the movie but we shouldn't talk about it lest people think we're weird!. It's a movie people aren't proud to watch... well, unless you're me and I'll proudly watch anything for this website (or, really, in general).

I can see why the film (which was a mild success when it came out, making back double it's meager budget) isn't brought up in the same kinds of discussions as classic Slasher flicks or more famous works of horror; that same glee it has, the Devil May Care attitude the film conveys so hard is also the reason it got an X rating when it first came out (and had to be cut down for an R rating afterwards). It's gleefully horrible, toeing the line of going too far for the era it came out in. Certainly I've seen worse horror films since 1985 (anything in the Torture Porn genre, like Saw or Hostel), but nothing that has the sense of fun while also being such a disgusting good time.

Despite the fact that it's a zombie/monster movie, Re-Animator is positively gleeful as it crafts its horror story. It opens with a bloody scene as main character Herbert West (Jeffery Combs) is kicked out of the medical school at Zurich (for experiments we'll get to soon enough). Now at Miskatonic U, West gets mixed up with good student Dan (Bruce Abbott). Dan is dating the Dean of Students' daughter, Megan (Barbara Compton), and struggling to get through his classes. But when West comes along, renting a room at Dan's house, it's his experiments that really catch Dan's attention because, you see, West has invented a special formula, the Re-Animator, that can bring the dead back to life. 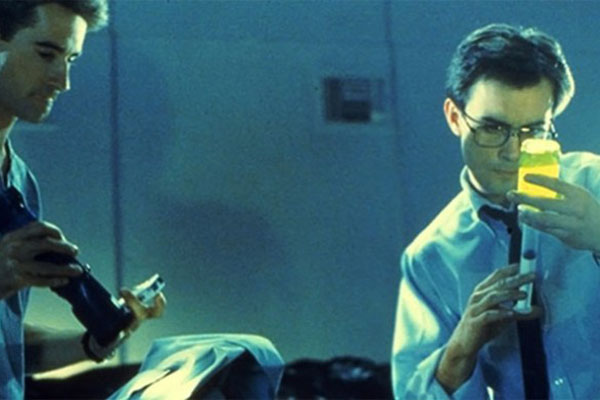 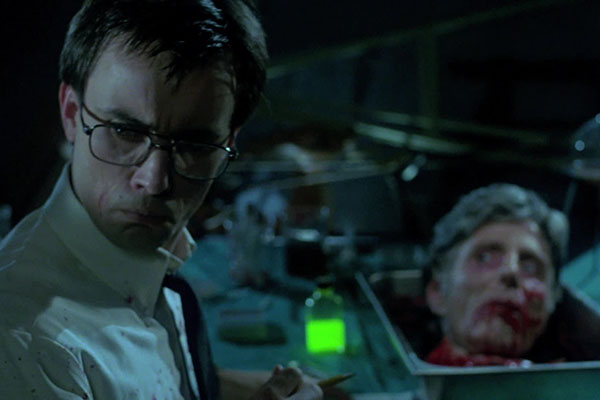 Well, some semblance of life. The body movies, the creatures react, but the mind and soul of the beings is missing. West thinks if he can just get a body fresh enough, can study them long enough, he can figure out the missing piece and finally truly conquer death. Unfortunately the Dean finds out about their experiments (and the fact that Dan is dating his daughter) and kicks them out. And then an evil professor, Dr. Carl Hill (David Gale), finds out about their work and greedily tries to steal it for himself. Soon murders, violence, and a whole lot of reanimated corpses start to emerge. The experiment goes off the rails and it's all the three heroes -- Dan, Megan, and West -- can do to get out alive.

Although Dan and Megan are the heart of the story in Re-Animator, it's really Herbert West who guides the show. That is thanks to the impeccable performance of Combs, a fantastic character actor who went on from Re-Animator to have a long and successful genre career. You can see his amazing work here as West, manging to find a specific take on the character that I don't think many other people could have pulled off, part nebbish dweeb and part psychopathic monster. His whole drive, as played across every move and every look by Combs, is to study his creation, to see how it works, to push and push to gain all the evidence he can... and then to do it again.

It's that drive that makes West so special. He always has to take an experiment not only right up to the edge of it becoming a disaster but well past it. Give him a body and he has to see what happens if he reanimates it. Give him pieces of a corpse and, yes, he reanimate each part separately and then study them. And always, every time, he does it with this look, this sidelong glance like, "I know I shouldn't, buuuuuut..." right before the needle goes in and he starts his work all over again.

The need to push, to always take an experiment too far on a hunch of theory, is part of why I consider Re-Animator less of a Lovecraftian work (even though it was based on a short story by H.P. Lovecraft) but something within the Frankenstein canon. West feels like he was brought in from another film, one of the Hammer Frankenstein flicks where it's the mad doctor, and not the creature, that's the real monster. West is a monster but you can't help but like him all because of how well he's played by Combs. 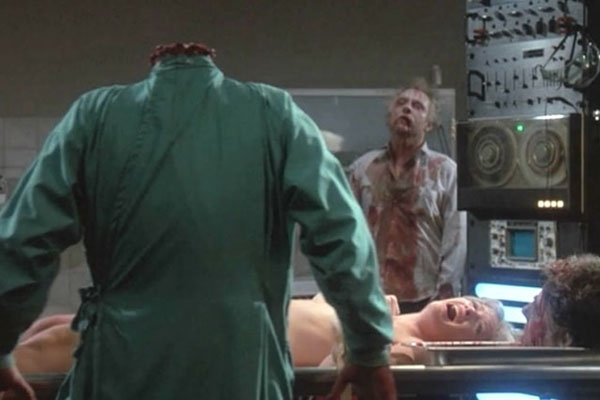 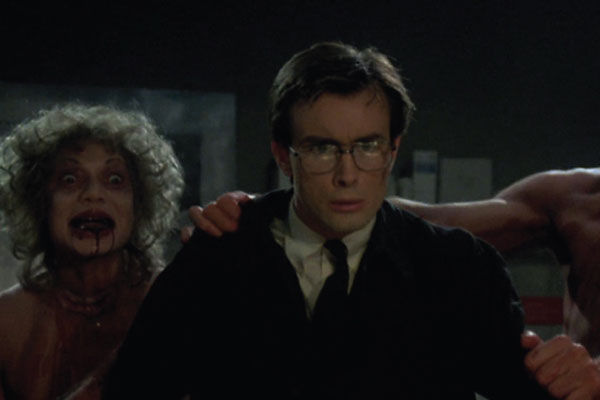 Of course, the other reason the film is well known at all is because of how far it was willing to push its subject matter. Bringing a corpse back from the dead? Sure. What about chopping off it's head and then reanimating each part separately? That happens. And then when the body strikes back, steals it's head, and then the two parts (working as one), kidnap Megan, strip her naked and then proceed to go down on her... yeah. This film knowns no real bounds and will always try to find that extra disgusting mile to explore. It's amazing, and awful, and hilarious. There are reason people feel this film is subversive and we might have just discovered it right there.

That said, depending on how you first saw this movie -- I watched the R-rated version that I rented from a Blockbuster back in the day -- you may not remember that scene. That's because there are actually three different cuts of the movie: the original X-rated version approved by the director; the R-rated cut that edits out the worst, most offensive bits but then stitched in a plot line about Dr. Hill, his obsession with Megan, and his hypnotic powers; and there's the Integral cut, that keeps all the X-rated material but also includes the weird subplot with Hill and his super powers. I personally prefer the X-rated cut over any other version -- it feels the most subversive without verging on self-parody.

But whatever version you watch you'll still have West and his gleeful desire to take his experiments too far, to push the movie as close to the edge as he can... and then some. And if you can't like that then Re-Animator just isn't for you.