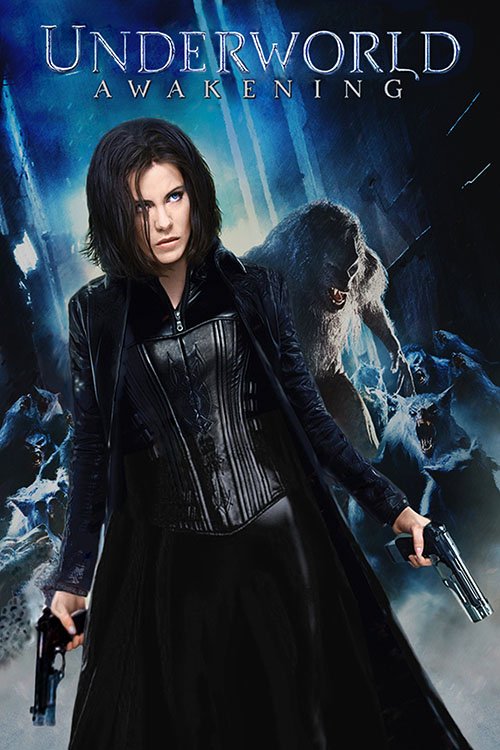 I think it's fair to say that, by this point, we should all know the thrills (or lack thereof) associated with the Underworld franchise. It's a film series that thrives on the idea that vampires dressed in dark leather while shooting guns can be cool. They're right, it is actually pretty cool. Any charm the films have is in the power of lead actress Kate Beckinsale to look cool in these films. She can pull off dark leather and dark looks while walking around in darkness and sell it for all its worth. The films don't have many charms outside of Beckinsale, but the fact that they're watchable is a testament to Beckinsale's power.

Let's face it, outside the actress these have generally been pointless exercises in stilted action and bad CGI. The series leading up to Underworld: Awakening saw two muddled films that established the modern-set vampire vs. lycanthropes tale before jumping into the past to deliver a prequel story we'd already basically seen before (in flashbacks in the previous movies). While the most cohesive of the three, that prequel, Underworld: Rise of the Lycans, was also the least interesting of the set. Swapping out skin-tight leather for bulky armor made the film feel less like a cool vampire flick than a bad Renn Faire production. The fact that Beckinsale wasn't in the film, either, really held it back. This is her series and that film, more than anything, proved you couldn't do Underworld without Kate in the lead.

Released three years later, Underworld: Awakening tries to mend all the mistakes the series made over the years. It brought back Beckinsale and her character Selene. It returned us to the modern setting that, frankly, worked much better than the Medieval past. And, most importantly, it didn't have series creator Len Wiseman involved in the story or the direction of the film. Aside from a producer's credit (presumably because he had some ownership over the rights to the series) this is a Wiesman-free film and it's better for it. That man can't direct his way out of a paper bag let alone figure out how to create a functional story. Passing the reins off to director Anna Forester and writer Cory Goodman, Awakening manages to create the most cohesive and interesting film of the set. I might even say it was actually a decent movie (and I legitimately feel dirty saying that).

The film opens with a prologue establishing a new status quo. Sometime in the months after the events of Underworld: Evolution humanity learned of the existence of vampires and lycanthropes. Fearing these infected beings, the humans began hunting them down, making it illegal to be a vampire or a lycan. The punishment: death. Selene and Michael Corvin, fearing for their own lives, try to hop a boat to get out of the city and away from humanity but, sadly, they're caught in an explosion that knocks out Selene and seemingly leaves Michael dead. 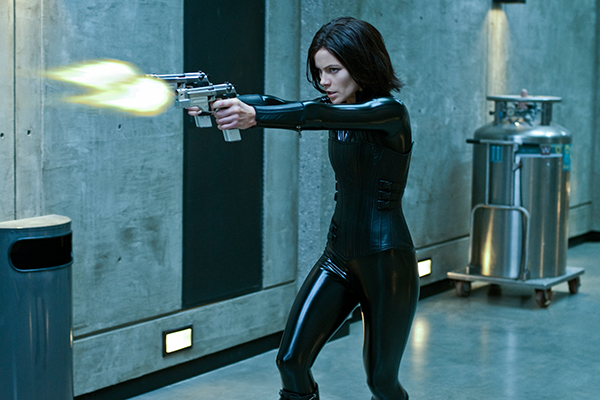 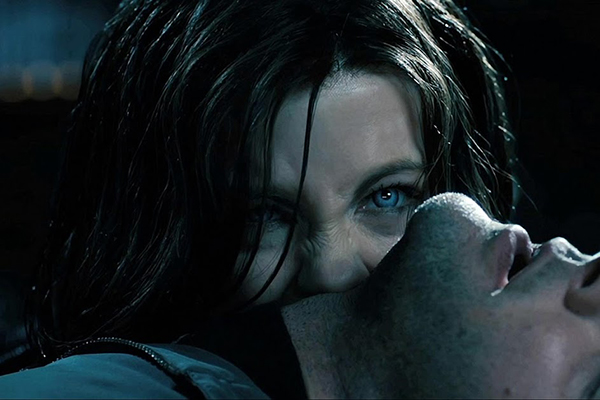 We then jump ahead over a decade to discover that, in a lab in the middle of the city, Selene has been kept on ice, frozen and asleep. However, a stranger breaks her free, releasing her onto a world she barely understands anymore. She desperately wants to find Michael, only eventually learning he died, and then getting an even more shocking bit of information: she has a daughter. Selene was apparently pregnant with Michael's child and, in the years since, that child, Eve (India Eisley) has grown to be a strong and powerful hybrid. Now Selene has to save her daughter and help the girl evade capture, especially since the lycans want the girl so they can make a "cure" for all of their own weaknesses. If Even falls into the hands of the lycans the wolves will take over the world.

The previous Underworld films all featured confusing world building that never really let us get a firm grasp on, well, anything. Were the vampires supposed to be our heroes? Were the lycans the bad guys? What about humanity (ostensibly, us)? Movie to movie the films never quite pinned down just how all these factions worked around each other creating a messy, vague war to explain everything that, really, explained nothing. So credit to screenwriter Goodman for crafting a story that actually irons out all those issues while givings us an actual plot line to latch onto.

Firstly, the story of a mother trying to help her child is a tale any audience member can get behind. She might be a vampire, and her child might be a hybrid creature, but a mother trying to defend her young is a primal story we can understand and relate to. It recasts Selene as heroine and, no matter who she's aligned with or what faction she's allied to, we can understand a mother on a quest for her daughter.

That also means that the lycans, who want to capture and kill Eve, become our default bad guys. Humanity only plays a small part in this film (once everything is revealed) and, certainly, we understand their perspective against the monsters. Casting the lycans as our villains, through and through, means there's no confusion over who to hate or why we should be rooting against them. They're a clear threat, both to the world and to our heroine, and thus we hate them. Well done. 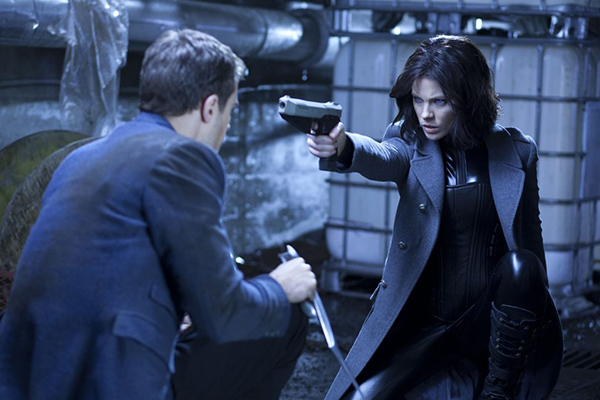 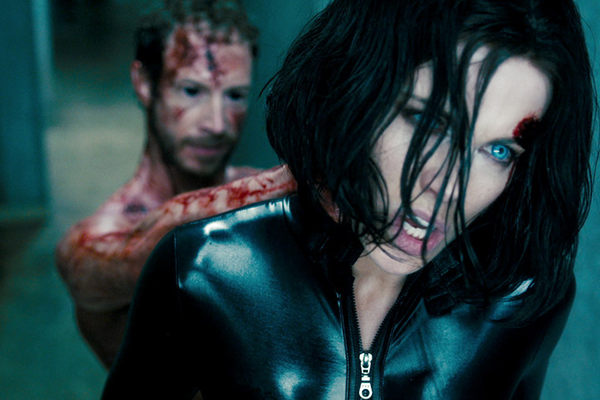 On top of that, director Anna Foerster knows how to direct action that's actually watchable. There isn't much to do with bad CGI except just try to move past it, which Foerster does. But as far as cohesive, well filmed gun play along with action that has legitimate impact, this film brings it all. I found I could actually enjoy the action of an Underworld film for once, and that was something I never thought possible. It wasn't great action but it was easy to follow, making it's miles better than the previous, hack-job edited films.

With all that said, this film is still not perfect, or even great. The acting, for one, is pretty terrible. Beckinsale can do stone cold killer like it's nothing, and that's all the film expects of her. The rest of the cast, though, is supposed to give emotion, to play actual characters that aren't emotionally stunted, half-frozen vampires, and they all universally stumble. The actors, from Theo James to India Eisley, Stephen Rea, Michael Ealy, and Kris Holden-Ried, all act somewhere around the level of a bad TV movie. No one is really in character, they're just spouting lines while trying not to look too bad. It's hard to invest in their characters when they aren't invested themselves.

Meanwhile, please Underworld producers, can we get a light filter that isn't blue? We do have a couple of shots in the day light that are actually yellow in tone, which was surprising, but it's just two shots and then the rest of the film is all the usual dark rooms, dark lighting, with lots of blue filtering. The first film got away with it because it was doing, "The Matrix but vampires" but now I'd just like to see a little color. Even the blood comes out with a bluish tint in these films. Let the blood flow and the colors fly, people. Make these films interesting to look at!

I didn't hate Underworld: Awakening. In fact, if at some point in the future someone were to say, "hey, you want to watch this film," I wouldn't immediately leave the house and break all contact with them. It's a watchable, almost decent film that stands head and shouldn't above everything else in the series. That's not high praise, it's a sad comment on how bad the rest of these films have been. But still, improvement in notable and this film managed it, making it the best of the set so far. It's not great but it's by no means as bad as everything else the series has thrown at us to this point.