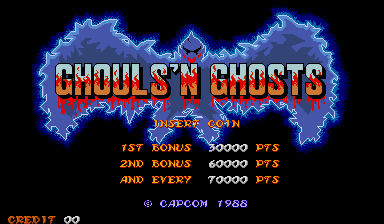 There's a linear path most classic game series made over the years. They start out exceptionally difficult in the arcades, sucking quarters out of players in timed, three-minute bursts, all to keep the players hooked, their adrenaline going, so they keep pumping money in, making the game more and more cold hard cash. But as the game series go on, and move away from arcades to the home consoles, these games generally get easier. Without the instant rush of popping a quarter in to try and get farther, the emphasis moves towards longer, sustained experiences that keep the gamers hooked through involved stories and deeper, more satisfying (but somewhat less difficult) play.

The Castlevania series certainly saw something similar to this arc. Although it didn't start out in arcade (having just one early arcade entry eventually, the frustratingly hard Haunted Castle, the series generally focused more and more on lengthier games, sustained experiences, satisfying play. It's never started out "arcade hard", but it did find a better balance of its elements over the years.

But then there's the Ghosts 'n Goblins series which started out hard, continued to be hard in this first sequel, and never stopped being hard (at least in its main series) for the rest of its life. It's goal, in short, was to continue the quarter munching experience, making players "prove themselves" against the gauntlet that was the series' exceedingly hard difficulty. Of course, in this, the first official sequel in the series, Ghouls 'n Ghosts (titled Daimakaimura in Japane, translated as "Great Demon World Village") remained an arcade title, still purposefully designed to steal quarters.

The game is just as tough as its predecessor. If anything, the programmers decided to make this game even harder, putting in more enemies, constantly spawning at you and purposefully aimed to tag you and take your life, all while sprinkling in all manner of traps to punish unsuspecting players. It's such a cruel game that it makes even the first title seem downright nice and jovial by comparison. This is a game that dares you to try and play it, laughing at your misery because it can. 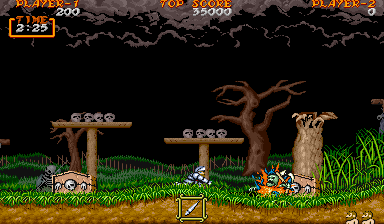 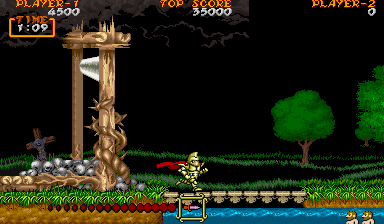 There are some improvements to this game over the first. The game now features a basic upgrade system where lead hero Arthur can go from his basic silver armor to special golden armor. This armor provides the hero with a boost in power, allowing him to do charged attacks, unleashing special, more powerful blasts based on the weapon he's carrying. This is a great improvement... except for the fact that the charge time takes a while to tick past, and if you want to use a charge attack you have to wait and not attack with your normal weapon, leaving you a might bit defenseless.

Plus, of course, the second you get hit you're knocked back into your skivvies. That, coupled with the fact that, because of the charged attacks the game expects you to be more powerful, and thus able to take on more enemies at once, leaves you pretty defenseless in anything less than the gold armor. The game takes no prisoners and pulls no punches, so you better memorize the levels, every enemy spawn, and everything you have to do if you ever hope to make it through the game.

Outside of this one play-style change, though, the game is pretty similar to the original (at least in arcades and most basic versions of the game). It does look nice, with solid graphics and decent sound (that remind me of Genesis hardware, although ironically the Genesis version of the game sounds worse by comparison). The levels are all new and different, with a new assortment of bosses to get through. However, if you've already played through the original game, this title does feel like more of the same. It's like an expansion pack for the original game -- new levels, new monsters, but very little in the way of major changes -- leaving this title feeling like just more of the same.

The only version of the game that actually tries something new is, weirdly, the inferior Sega Master System edition. That one features secret shops you can enter to get upgrades that give you more power, more health (so you don't immediately get knocked to your skivvies) and better weapons. This is coupled with a game that doesn't seem to crank out as many enemies on screen, probably because the Master System couldn't handle it (being, effectively, Sega's version of the NES). It makes for a more bearable, and frankly more fun, version of the title. 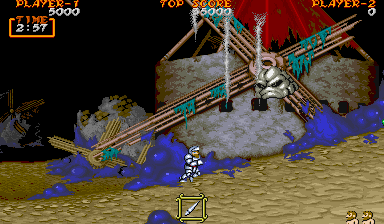 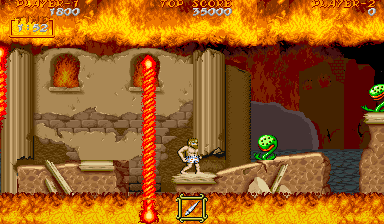 Yes, sure, purists will want the ultra hard experience. For my money, though, if I have to suffer through any version of the game I'll take the Master System one. At least in this version of I have a chance of making it to level two.

It's hard to say that this game has too much in common with the Castlevania series. Where that game series went for solid improvements and expanded experiences, Ghouls 'n Ghosts doubled-down hard on what worked from the first game. Thus we have more of the same, just harder and bigger.

The upgrade system, though, does feel like Capcom borrowing a small page from Konami's platformers, taking the idea of Simon's upgradeable whip and applying it to Arthur's armor. It's not quite one-to-one as the basic weapons don't feel any stronger when Arthur is wearing gold, but it does come into play with those charge attacks he can do, letting him harness the full power of the upgraded weapons.

Heck, in a way, the upgraded attacks feel kindred with Richter Belmont's item crashes, which created their own overcharged attacks. Where Richter had to spend a bunch of ammo to use these attacks, though, Arthur just has to sit and wait. Frankly, considering the difficulty of this game, I think I would have preferred consumable ammo instead.

I think the strongest parallel, certainly, between the two series lies in the Master System edition, which added in the shops with upgrades. This feels of-a-piece with Castlevania II and its own collection of shops and upgrades. It's here where it really feels like Capcom saw what Konami was doing and took inspiration, applying it gently to the basic arcade experience for a little more depth.