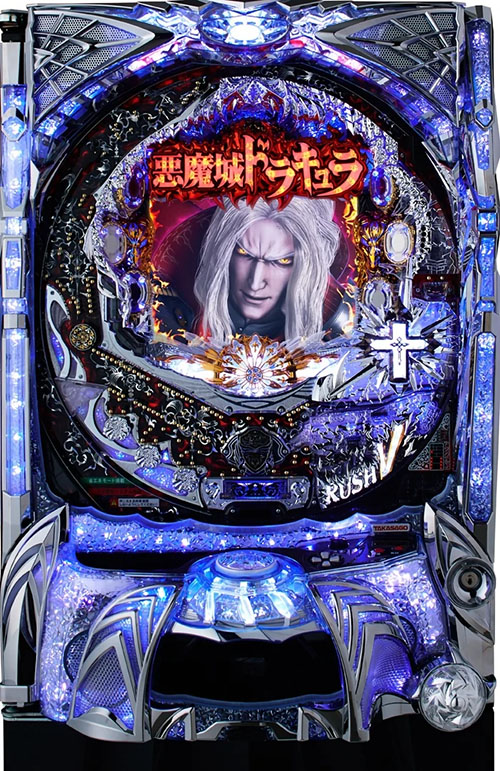 Konami developed quit a selection of gambling machines over the years, from the early days of Wai Wai Bingo to their line of Pachislot Castlevania titles. However, one type of machine Konami had yet to actually produce was a proper pachinko game; although their titles appeared in the various arcades and pachinko parlors, Konami veered more towards pachislot titles, in part because those games required vastly fewer mechanical parts to run and maintain.

That's not to say there wasn't a pachinko game in the Castlevania series, simply that Konami didn't officially produce one. Instead they licensed their property over to Takasago Electric Industry, a maker of a number of pachinko games, and let that company handle development and distribution. The resulting game, CR Pachinko Castlevania (titled CR Pachinko Akumajo Dracula in Japan, with the "Akumajo Dracula" translating as "Demon Castle Dracula") is about what you'd expect from a pachinko game: you put in tokens, get a selection of little metal balls to shoot into the machine, and depending on where you shoot/drop them, the balls will bounce into various cradles. You could win more balls based on what slots they fall into, and even activate boss battle mini-games to play.

The boss battles are probably the most interesting part. These share a thread with the pachislot games Konami was producing: you'll see a cut-scene play, and then you're supposed to push a button at the right times to activate further actions. Play it right and you'll win even more balls to play with. And, of course, you can cash out your balls at any time for tokens/tickets to cash in for prizes. It's the standard gambling feedback loop we've seen from all the other, official Castlevania gambling machines, just with pachinko this time around.

What's interesting is that unlike the other gambling games we've covered so far, which either just used a selection of Konami mascots or focused on retelling the adventures of Trevor Belmont, this pachinko game seems to be set around the time of Castlevania Dracula X: Rondo of Blood, featuring Richter Belmont and Maria Renard. It also, curiously, features a lot of "erotic violence" (literally tagged as such in the game's trailer). Apparently eroticism is pretty prevalent in Pachinko and Pachislot games, so this isn't outside the norm. It's just odd to see with these characters and in any licensed Castlevania game.

Over all, though, this is exactly what you'd expect from a pachinko game: a bit of twitch game play, a lot of luck, and so many tiny ball bearings. Although certain collectors and gaming parlors in the U.S. have gotten these machines, they're still a rarity outside of Japan's shores, so the likelihood of seeing one these out in the wild is still pretty slim. Consider this an oddity for the series, for all the reasons stated above.

CR Pachinko Castlevania has no review. You could be the first to review it! Contact the staff of the Inverted Dungeon to contribute.