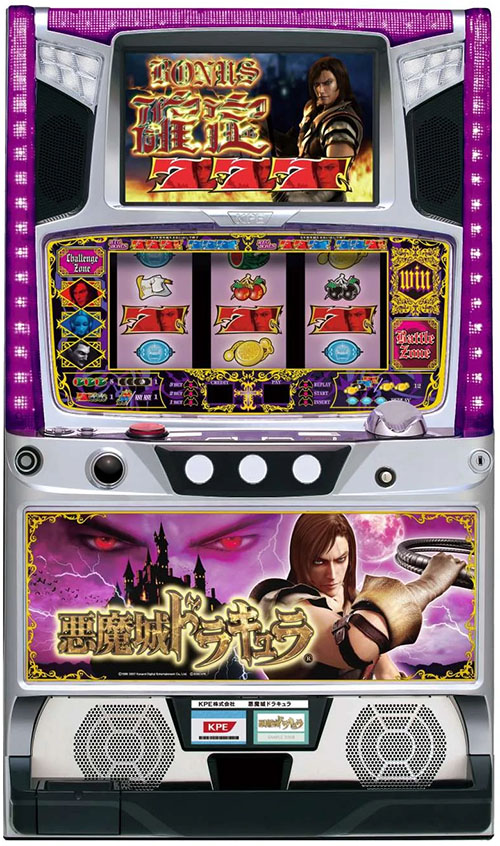 After the success of Castlevania: The Medal -- a digital, five-reel, multi-line slot machine with bonus modes -- Konami went all in pushing the Castlevania series onto further ventures. A year later this led to the release of Pachislot Castlevania (titled Pachislot Akumajo Dracula in Japan, with the "Akumajo Dracula" translating as "Demon Castle Dracula"), the second slot-machine style game designed for Japanese arcades and parlors.

Unlike in the U.S. where arcades are basically dying and, even among those places that are still alive, traditional video games reign, the Japanese market has serious love for pachinko games. A traditional pachinko game sees a player pay tokens for metal balls that they then shoot into a machine. The balls will drop through the machine and, eventually, land in slots that either win or lose tokens or tickets or whatever the parlors uses as currency. If you've ever seen The Price is Right then you know that game show has Pachinko as one of its games and you should be familiar with the basics.

Although it shares a name with Pachinko, Pachislot isn't really the same thing. Yes, reflexes are still involved, but this is a slot-machine not a standard Pachinko game. Like Castlevania: The Medal, this game starts off with the player spinning the main reels (three, in this case) in an attempt to make matches. However, the "pachi" spin on the game allows the players to press buttons ties to each of the reels in an attempt to stop them at the right moment. Press each reel to make combinations, and if the play makes a combo of Lucky 7s they can then unlock various "Bonus Missions" that play out across the top screen of the game. Most of these bonus missions are automated and totally random as to the outcome, but they still add an additional element to the game beyond a simple slot machine mechanic.

This is the first of three Pachislot games released around the same time, each featuring elements and characters from Castlevania: Curse of Darkness. Although the game is light on story (with most of the actual "story" being left to the player's imagination), the basics see hero Trevor Belmont taking on Dracula across three zones -- the castle's chapel, a warehouse area, and the outer walls -- after the demon is resurrected. To aid Trevor we're introduced to new character, Church-sanctioned warrior (and dancer) Angel, who aids Trevor is his fight (and provides a fair bit of cheesecake for the male players in the audience).

Overall, like the other gambling machines, Pachislot Castlevania is a fairly shallow experience. That, though, is viewed from a Western perspective, to be sure; in Japan the game was popular enough to see two sequels (and then a Lords of Shadow spin-off years later). SO while we think these games are weird, Konami was obviously onto something in their home country.

Pachislot Castlevania has no review. You could be the first to review it! Contact the staff of the Inverted Dungeon to contribute.