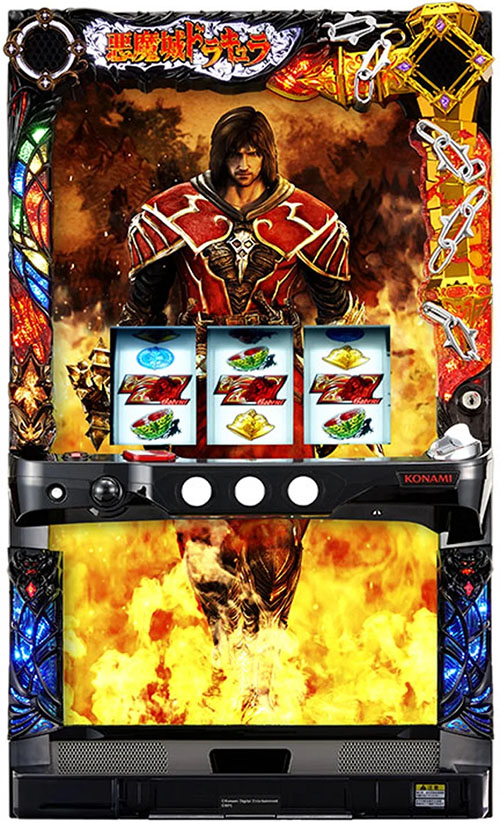 After releasing a trio of pachislot titles in the Castlevania line back in 2009 and 2010, Konami remained fairly quiet on that front. The three games, for all their different artwork and in-game videos, were basically the same, which was part of their appeal. If needed, a gaming house operator could swap out boards and artwork from one machine, upgrading it to the next with minimal fuss. The mechanics were the same, so regular refreshes could keep the games viable, and with three too choose from there was plenty available without needed too many new games in the series.

That said, seven years was a long time to go without any refresh for the units, so eventually Konami did come back around with a fourth (and so far final) entry in the series. But instead of basing the title on the continuing adventures of Trevor Belmont, the resulting game, Pachislot Castlevania: Lords of Shadow (titled Pachislot Akumajo Dracula: Lords of Shadow, with the "Akumajo Dracula" translating as "Demon Castle Dracula") is focused instead on retelling the adventures of Gabriel Belmont instead.

Retelling isn't entirely honest, of course, because this is still a pachislot game well in the vein of the previous gambling titles from Konami. As such, whatever story is in the game is mostly just bits and pieces leaving most of the storytelling up to the imagination of the players. The game play remains largely unchanged from before: the setup is a three-reel slot machine where the play seeks to make combos by pressing buttons to actively stop the reels. Get a combo, get a pay out, while getting a line of Lucky 7s will start a bonus game on the other screen featuring Gabriel and new assistant, Felicia, as they battle the hordes of evil.

For all intents and purposes this is yet another edition of Pachislot Castlevania, which for Western audiences makes it more a curiosity as pachislot (and pachinko) games aren't as prevalent here as they are over in Japan (limited to a few select parlors across the U.S.). The real interest is in the fact that Konami decided to take the, frankly, dour and depressing Lords of Shadow series and turn it into a bright and shiny pachislot game. That seems like a really weird fit between source and substance, which might go some way towards explaining why we didn't see further games in this side series.

It's unlikely that fans were tired of Castlevania pachislot titles in general as, a year later, Konami would produce four further games in the line, this time going back to Castlevania: Curse of Darkness characters instead. So, more likely, fans just weren't interested in the Lords of Shadow series, instead. Can't say we blame them...

Pachislot Castlevania: Lords of Shadow has no review. You could be the first to review it! Contact the staff of the Inverted Dungeon to contribute.