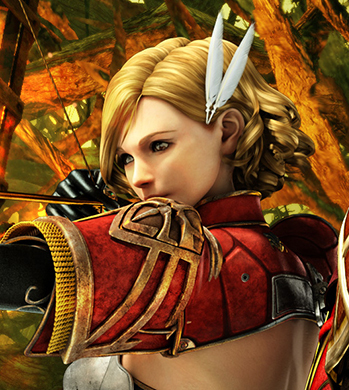 A new character created specifically for this gambling game, Felicia is one of only two known members of the Brotherhood of Light (the other being Carmilla. Sadly, beyond that, not much is known about Felicia. As she wasn't in the original games in that sub-series, added in only here to fill the role originated by Angela, she's given little in the way of character or background (in part because these pachislot games are designed with little in the way of actual story, leaving most of it up to the imaginations of the players).

All we really know about Felicia for sure is that she joins up with hero Gabriel Belmont sometime on his journey to avenge his wife and take out the Lords of Shadow. As Gabriel ventures along, Felicia will assist, providing bonuses and augments to his own attacks (along with a fair bit of skin). She battles through the journey with him as he takes out all three of the Lords, but they aren't able to reach the ultimate goal of killing Satan (as that was probably reserved for a sequel game that didn't come out).

And sadly that's really about it. Felicia hasn't appeared in anything else related to the series since, and since Konami has moved on to a newer model of Pachislot machines since this game was released, it's doubtful we'll ever get any kind of revisit or resolution for Felicia's story (such as it is).