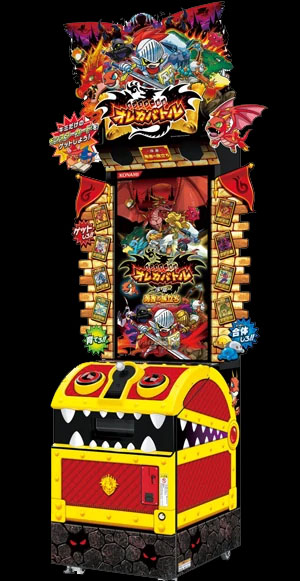 It's amazing how long the collectible trading card game fad has lasted. For decades now kids (and adults, lets be honest) have collected various card games -- Magic, Pokemon, Yu-Gi-Oh!, etc. -- moving from one game to the next (and then back, often times), with gamers continuing to collect each new set as they arrive, often with baited breath. Of course, once a company has a successful trading card game, they can milk money out of their fans for years and years.

Part of that is because collecting card games is a blind hobby. The games are generally released in larger decks ("starter decks") as well as small-pack "boosters", and the collectors have no clue what will be in one of these sets, pack to pack, so they might get some really good cards or yet another common card that they already have 40 of. It's like gambling except without the monetary pay out (at least not until the collector gets tired and decides to sell all their cards).

Considering their investment in the gambling markets, it should be no surprised that Konami also had their hands in the collectible card market. Hell, they already own all the licensing rights to Yu-Gi-Oh!, which is considered one of the most successful media franchises in history. But that clearly wasn't enough for the company as they wanted to get another trading card franchise out there. Thus, in 2012, the company released Monster Retsuden Oreca Battle, an arcade game/collectible card game.

The game is kind of a blend of card collecting and gambling machine mechanics (two things, at this point, the company knew very well). After inserting their money and scanning their "collection" of monsters into the system, a battle would begin. With the selected card monsters at the ready, the game would provide an appropriate enemy for the player's team to fight. Battle consists of the battler being highlighted while their action wheel spins, roulette style. Like with a pachislot game (see: Pachislot Akumajo Dracula), the player is tasked with pushing a button to stop the reel around where they want it. Then the battler takes their action, each going in turn before the enemy takes their turn.

The mechanics are pretty basic, but there is a risk-versus-reward mechanic in play based on when the player hits the button and what action will come up. That could create a pretty solid enjoyment loop, if gambling machines are your thing. And then, once the battle is finished, your hero monsters level up, sometimes gaining additional abilities on their action reels (or even new reels altogether) before the game ends. Even then, you are granted the ability to print off one of your cards, and maybe even merge one of your hero monsters with the defeated enemy to upgrade them.

Supposedly there were over 100 monsters to collect, upgrade, and print-off. The game had "Aluc" as a collectible monster, and he could be upgraded and evolved into Alucard and Dracula. Simon and Death also seemed to have been in the game, presumably as special enemies for the player to battle.

Like with most other Konami gambling machines (which, all things considered, this game is at least a cousin to all of those), Monster Retsuden Oreca Battle never left Japanese shores, at least not officially. It's odd because most of the game's art and in-game text had English on it, so this could have been an easy port. It may just be that the game never gained traction and wasn't worth porting out to Western shores. It did have a short lived anime, but after 2012 it appears that the game simply faded into Konami's history.

Monster Retsuden Oreca Battle has no review. You could be the first to review it! Contact the staff of the Inverted Dungeon to contribute.