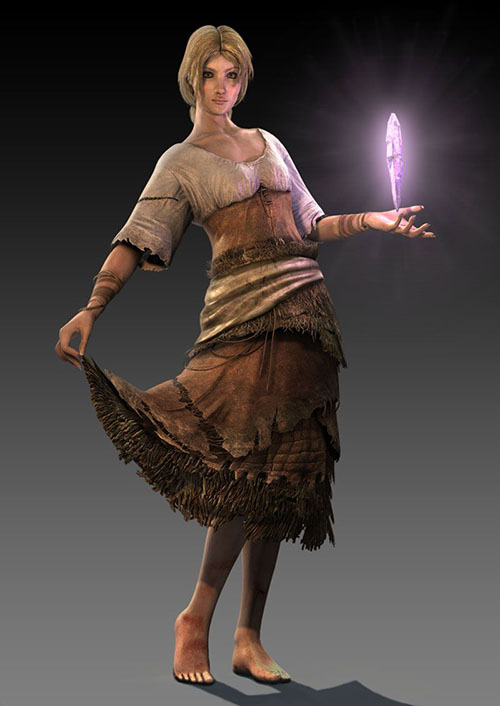 In the scope of the Castlevania series, Claudia is an odd case. She's a heroic character that the player never actually gets to control, either in the main quest or any kind of side quest. She's the rare character to show up and actively participate in events (including having lines which, as a mute, she "speaks" via her mind) but the player never once gets to "be" Claudia.

That said, in a different respect Claudia fits right into an awful tradition of the series: specifically, Claudia gets fridged. Our nominal hero for the game, Gabriel, meets Claudia and, after a bit of back and forth, she ends up helping him explore an area he might otherwise have never made it through on his own. And then, right as the two bond, Claudia dies essentially only to further the hero's plot. A solid, interesting character is murdered just so the hero can be motivated to move on to the next section of his quest.

Unfortunately this is all too common in the Castlevania games, actually having already happened earlier in this game when Gabriel's wife, Marie, was also killed to get the plot moving forward. We feel for you, Claudia: you are another great female character struck down in this series simply so the male hero can get a move on. You were owed better.

Once, centuries ago, there were a race of beings known as the Aghartans. These beings built great technological marvels, cities that touched the sky and guardians, the Titans, who defended their lands. The Aghartans lived very long lives, often for centuries, and they took their time on Earth to perfect their technology, making science that looked practically like magic. 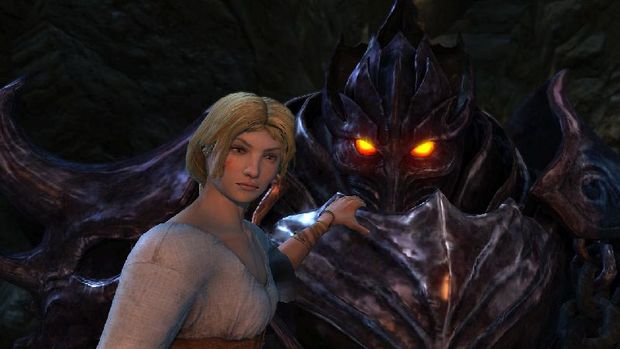 Unfortunately, after the fall of the leaders of Light, when the Lords of Shadow took over their bodies, the three Lords waged a war on Agharta. Under the onslaught of these villains the cities of the Aghartans quickly fell, leaving naught behind but ruins. Well, and one survivor, Claudia, a mute girl who lived in the broken cities for years. When she was younger her father built for her a Black Knight Guardian, a powerful golem that acted as her protector. When the cities fell, Claudia was defended by the golem, and together the two forged a bond as they survived in the wastes of her home.

When Gabriel Belmont came barging into Agharta on his own quest, Claudia eventually found him. Using the telepathy she'd developed over years of being alone in the city with just her (also mute) golem, she was able to communicate with the hero and show him the way through the ruins. Gabriel was thankful for the assistance but Claudia was wary of the hero. She'd read his mind and forseen a future where he would betray her. Despite this, though, Claudia continued to help the hero, perhaps in hopes that he would avoid his destiny and be a better man.

Gabriel had already fought one of the Aghartan Titans before arriving in the ruins but the only way to progress on his quest required him to battle another of these great constructs. This time Claudia assisted him, granting the hero magical support so he could take the Titan down and clear another threat from the world. After, the heroes made camp, jubilant in their success. Things, though, we about to take a nasty turn.

In the night, Gabriel dreamed that he stalked over to the sleeping Claudia and stabbed her. She awoke when it happened and wasn't mad for she had seen this coming and, knowing the whole truth, she knew it was just her time. Gabriel cried out and, when a vision of the demi-god Pan came to him (Pan having shown up earlier in his quest, warning that this trial would occur, that he'd be forced to kill one of his companions), Gabriel refused, saying he'd never kill one of his companions.

Unfortunately he already had. The dream had been reality and Gabriel awoke to find his hands covered in blood, Claudia dead with his blade in her gut. Although Gabriel didn't know it he hadn't actually killed Claudia on purpose -- he'd been mind-controlled to do it by Zobek, Lord of the Necormancers, a detail that wouldn't come to light until much later -- but the guilt that hung over his head stung all the same.

Finding his charge dead, the Black Knight Golem attacked Gabriel, a battle to defend the honor of his lost friend. Gabriel bested the automoton, gaining the beast's great black gauntlet (a device he needed to further his quest). But even then he wished things had worked out differently.

Claudia's story essentially ends here although, in the ending for the game, a vision of the girl appears to Gabriel to say she forgave him for what happened, then she shot off to the afterlife. That's nice, we guess, but still cold comfort all things considered.