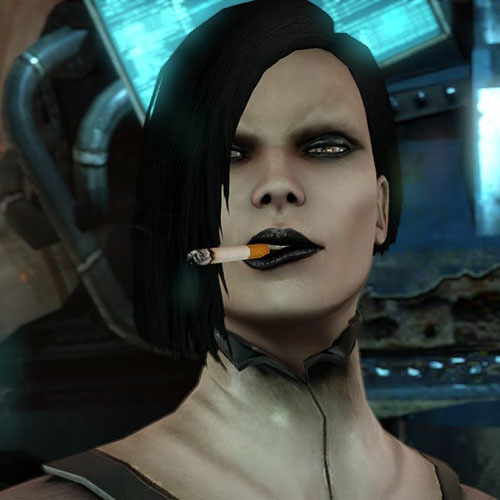 The Lords of Shadow games are unusual for the Castlevania series, not only due to their revisionist take on the mythology, but also because they tell the story from (as we eventually learn) the perspective of the villain (or, really, anti-hero), Dracula. Every game in the series has revolved around Dracula in some form or another, but to show the vampire descent from bona fide hero Gabriel Belmont to seemingly villainous Dracula was new, and (in fairness) an interesting angle for the series to take.

That shift in perspective, though, meant that a different villain had to be chosen to lead the story of the series. That villain, as we learned, was Satan, pulling the strings behind the scenes through the games. The first game in the rebooted series showed some of the monster that (in the main series) would have been Dracula lieutenants instead played as antagonists towards our anti-hero, and then the direct sequel, Castlevania: Lords of Shadow 2, featured more of these beasts corrupted by the evil of Dracula's castle (although they were a tone time loyal to our vampire). What the game needed, in it's modern-set main storyline, were villains aligned with Satan to battle against Dracula directly.

Raisa Volkova was revealed to be the first of Satan's lieutenants in the game. Not only an acolyte of Satan, though, she was also a demon and daughter of the hell-fiend. This gave us a new baddie to fight, new terrors to take on, and not just more reinvented monsters from past Castlevania titles. Say what you will about the Lords of Shadow games but they did try to find new elements to add to the series. 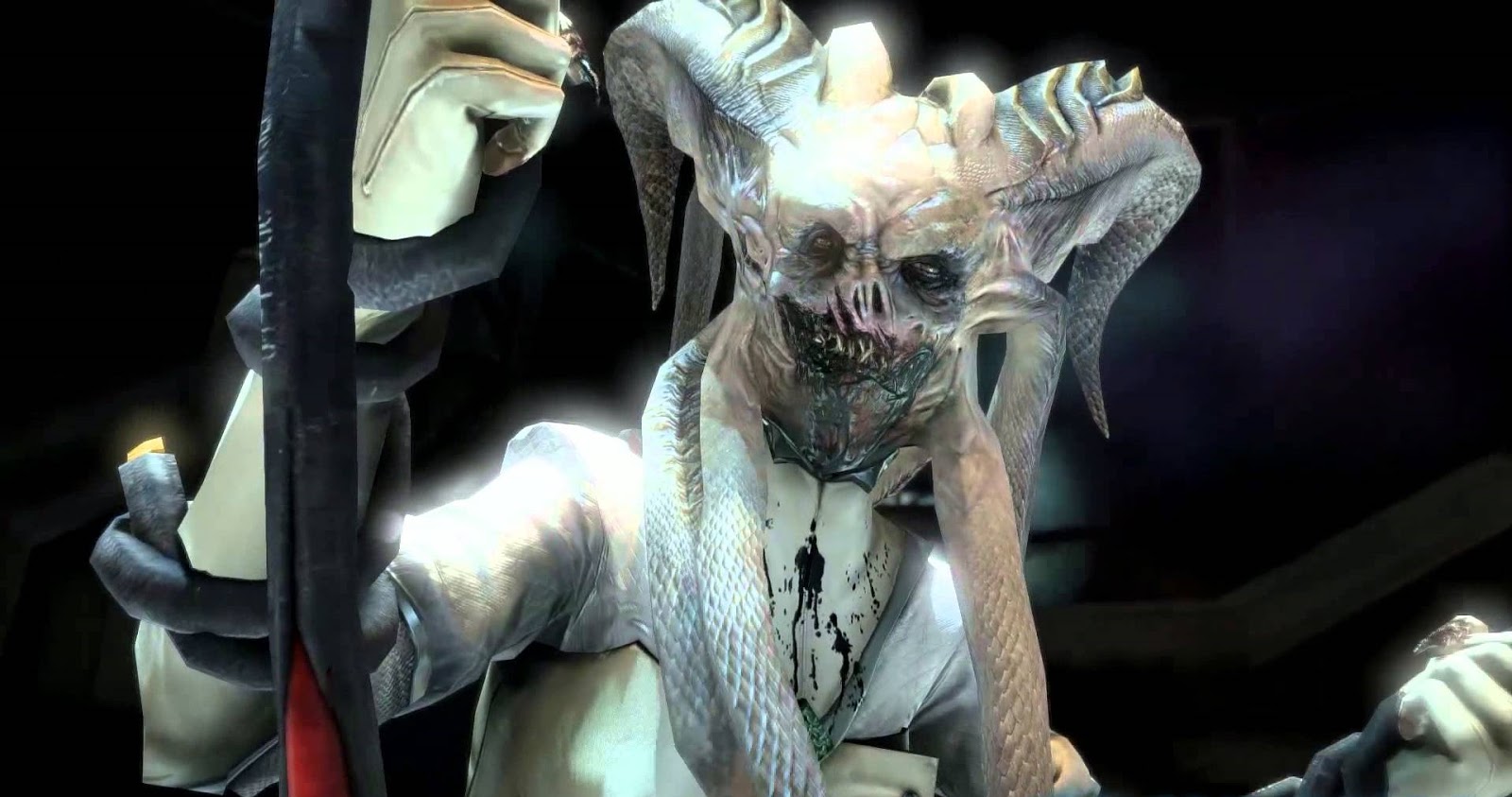 When Dracula first awakens in Castlevania City he's weak and lacking many of his powers. Sent out by Zobek to explore the city and regain some of his past abilities, Dracula soon stumbles into the Bioquimek Corporation facility, an evil group tapping into the dark magics to create bio-weapons that could turn humans into monsters. In the ten years before Dracula rose (from his long, 500 year slumber, into the year 2057 AD). Raisa and her agents had kidnapped hundreds of innocents, experimenting on them to perfect her devilish weapons. Although at first Dracula is too weak to directly take on the agents of the corporation, he slowly builds up his power over time so he could take on Raisa and stop these horrors.

Once powerful enough to take on the agents of the facility, Dracula encounters Raisa (who, prior to this encounter, had transformed herself into a weaker, more human form). Mistaking her for just another lab tech at the facility, Dracula captured her, taking her back to Zobek's base to be interrogated for information. Thinking the virus had affected her (which wasn't entirely wrong, although the end result was unexpected for our hero), Dracula went back to the chemical facility to try and find an antidote. He assumed this would cure Raisa, making her more pliable and willing to divulge information about Satan's plans.

Instead, though, an injection of the antidote reveals Raisa's true demonic form. Shown to be a true daughter of Satan, Raisa attacks, taking on Dracula in the ruins of Zobek's lab. A fierce battle ensues, and only by using a artifact Dracula had picked up along the way, the Void Sword, was he able to slay Raisa, cutting her in two. 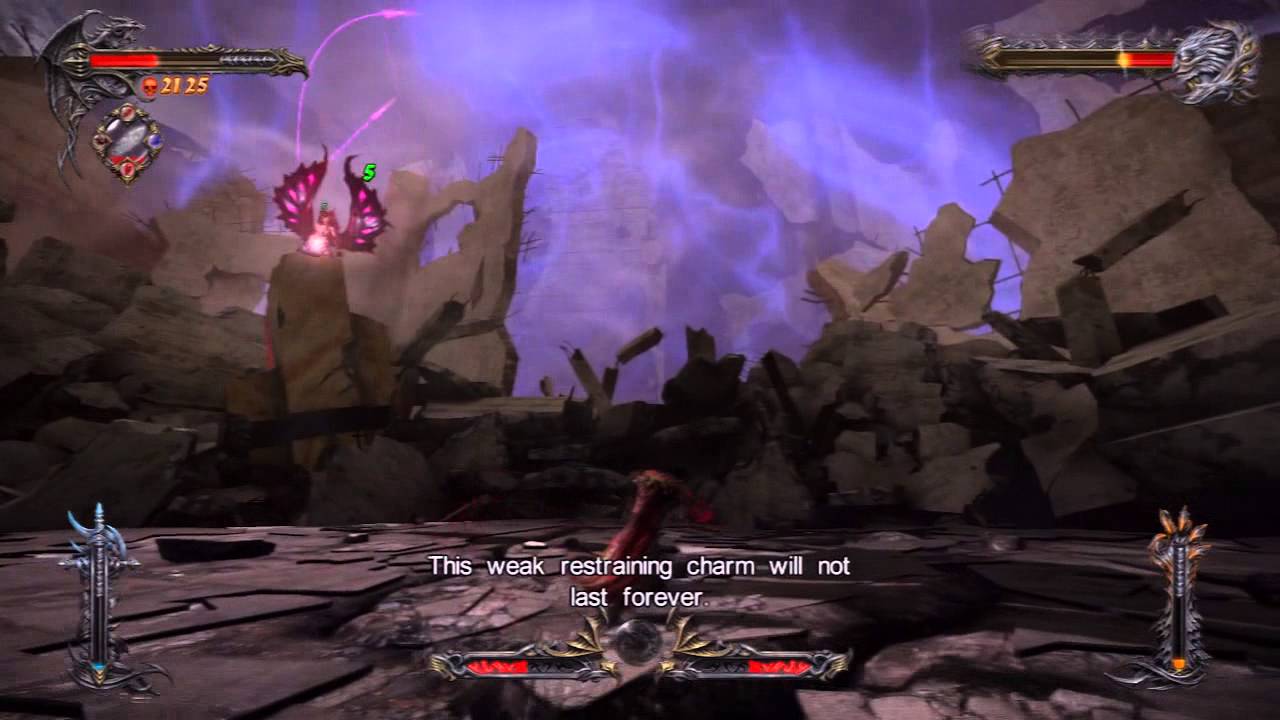 In the first encounter with the daughter of Satan, Raisa appears in her "half mutated" form -- still quite humanoid, but with demonic tendrils and other nasty features. She'll grab up two electrical cables, using these as weapons during the battle. She'll swing at Dracula in wide arcs, doing basic melee attacks, and she has a timed hit that can be dodged (or countered as well), which leads to a double slash melee attack. She can whip at the hero as well with her cables, and if she hits she'll bring the vampire in to bite him (which can be avoided with a QTE button press). She'll also summon electricity to the ground, causing chain pulses along the floor that have to be briefly dodged. Once damaged down by a third of her health, she'll start summoning more electricity, in larger patterns.

Brought down to half health, she'll get angry and start performing dash attacks around the room. These render her invisible until the attack, and the only way to stop her is with the Void Sword ranged attack which will freeze her and prevent her dashing. She'll then continue on with her patterns. You can continue to attack her with the Void Sword at this point, though, and it will deal massive damager to her. Just keep a little of it's energy in reserve, just in case she shakes off the frozen status and tries to perform her dashes again.

In her second fight, once her true demonic form is revealed, she'll have a whole new set of attacks. She can slash at the hero, causing a moving wave of damage in a straight line. She can also charge up with a power attack (that can be dodged or countered) for a dash across the arena. And she'll start adding in short melee strikes (with her hands and her tail) as well as her energy bar is slowly depleted. Once more than a third of her health is gone, she'll fly up to a high point in the arena and summon purple magical orbs that will strike wherever Dracula was standing, forcing constant dodging, before finally coming back down right near the hero. This is a good time to lay in some damage, but don't linger as she'll eventually perform a melee wing smash.

Past her halfway mark, she'll add in a stomp attack that will send a pulse along the ground, as well as a cyclone she can summon that will capture Dracula, forcing a QTE event to escape it's whirling winds. At this point you've now seen all her tricks and should be able to deplete her health the rest of the way, finishing her off.