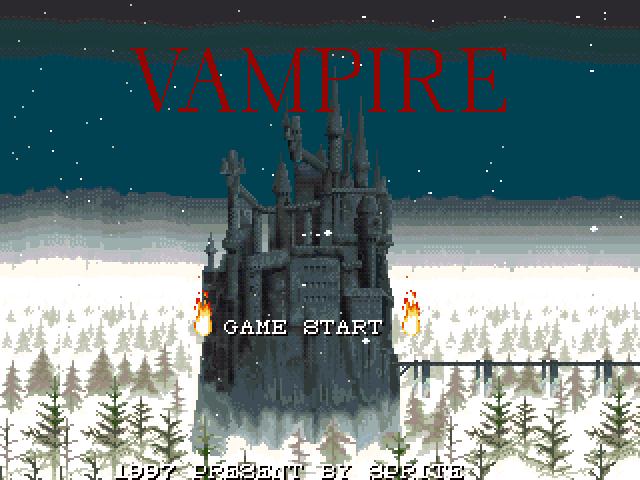 Going through and playing a lot of these Castlevania fan games, I was reminded of a title I played years ago thanks to the Castlevania Dungeon (the site that helped to launch this bad boy, ICVD). In their homemade games section they listed Vampire, a title made by Japanese developer Sprite that, even now, stands are one of the better fan-made Castlevania games around. It had style, it had lush graphics, and it seemed like the answer to ever fan's dream about, "how would you make your own Castlevania game?"

Actually playing a copy of the title, though, proved more difficult now than ever back then, largely due to the way the Internet has moved on over the years. Sprite's site vanished from the web and the Castlevania Dungeon was kicked of their original hosts (Classic Gaming after corporate owner Gamespy dissolved all their old hosted fan-sites) leading to all their downloads getting broken or corrupted in the transition. With that, one of the only sources to find the game vanished, leaving it hanging in this nebulous zone -- a game many of us fans remember playing way back but has been lost to the sands of time.

Thankfully, digging around enough I was able to track down a copy (which, due to the game being both abandoned and freeware, I'm hosting at the bottom of this page). Booting up the game It's just as I remember it: gorgeous to look at for the era it came out in and also hard as nails. In that regard it feels like a perfect Castlevania fan-game as it's got the right ambiance, the right style, and just enough unforgiving game to make you work to learn to beat it. This is pure Castlevania fandom through and through.

The game (which is somewhere more complete than the v0.4 that I could originally grab from the Dungeon back in the day) has a nameless female protagonist battle her way through hordes of monsters with only her whip and a few items she collects along the way. In style and tone it evokes Castlevania, especially in this later version that seems to have stolen more than a few ideas from Castlevania: Symphony of the Night (which came out the same year as the last edition I could find). Sprite clearly had some ambitions for the game, many of which they were realizing in this last edition they published.

I really do like the graphics of the game, most of which seem original (the bat and some of the skeletons seem to have been borrowed from the main Castlevania series). It has a lush feel to it, a style that perfectly captures the Gothic feel of the original series without (for the most part) directly stealing from it. It's a loving tribute but one done in such a way to not garner the ire of Konami's lawyers back in the day. Certainly had this been a for-pay video game I could have seen Konami slamming down hard on the title... but then again, maybe not. There was Rusty, and that came outright steals just about everything from the Castlevania series and got away with it, so who knows?

This latest edition had some features I didn't remember from previous versions I'd played. There's an opening sequence of our nameless girl riding her horse across the countryside that feels inspired by Castlevania Dracula X: Rondo of Blood, and a whole soundtrack has been put into the game (previous versions just had sound, no music). It all has that right vibe for the series, really nailing the aesthetics and feel perfectly.

That's not to say everything is great and perfect, though. For starters, the controls aren't quite right. I spent a lot of time dying at the start just trying to figure out how to control my girl (the keys aren't mapped in any logical way for most keyboards and there's no way to re-map them). Even once I got going I was constantly fighting her urge to run (which is done with a very sensitive double-tap of the keys) along with remembering which key was the attack and which was the jump.

There's also an item system in the game that feels incomplete. I could open a menu and see a few items already in my collection, but as I played through the game I also found those items around the world. I don't know if collecting them unlocked them or if they were already unlocked as they really didn't seem to do anything. In fairness to the game I can't read Japanese and this game is entirely written in Japanese (aside from the title screen) so maybe there's something I was missing. I just wish the rudimentary item system wasn't quite so obtuse and would let me in just a little. Or maybe it really is incomplete and we needed another revision to see what could have been.

Additionally, the game is hard as nails to the point of annoyance. I'm sure there are people that can get through this game (which, reportedly, is quite short) but I am not one of them. As I did back in the day, I managed to get about two stages in to a climb up the mountains leading to the vampire's castle and I was killed by harpies. I died enough on the way over, and then more on the climb itself, that I ran out of lives (despite the game seemingly having no life-counter making me wonder if the lives were being eliminated in an update that just never came). The gauntlet I faced was bad enough that, as I did back in the day, I set the game down so I could go play something else.

In that regard, then, this does feel exactly like a Castlevania fan game. The enemies spam constantly and the game expects you to simply "get good" without any worry about balance. I'm sure, with enough practice, I could learn the game and figure out all its tricks but I feel like tackling the original Castlevania would be an easier experience and I'd just rather do that. It's hard, but it's not this hard.

So yes, the difficulty knocks the game down some. But for so obvious a fan game, done in loving fashion and published for free so many years ago, it's hard to knock the game for its style and its ambition. Plenty of fans of the classic series will be able to get through this game (even if it does verge of "kaizo hard") and enjoy the experience through and through. Even if you're a filthy casual like me its worth at least trying this game out once -- it's free and it hits the right notes of style and ambiance to really get those Castlevania juices flowing. It may be an incomplete game that won't ever see another release, but for what it is it's a pretty solid work of fan ingenuity.