Revenge of the Creature 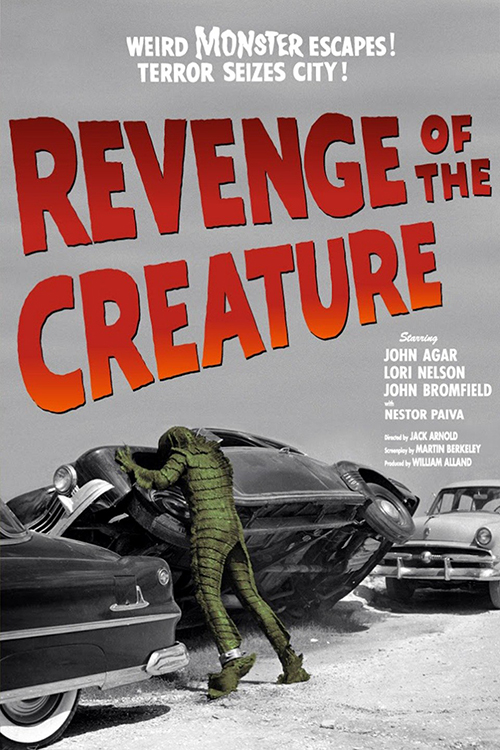 I'll be honest here: 1954's Creature from the Black Lagoon was a rote creature feature dressed up with a pretty solid mer-suit. The actual design of the Gill-Man is really solid, with a detailed and quite articulated fish suit that looks fantastic on screen (even if the dead eyes on the head portion were a little off). The story in Creature from the Black Lagoon, though, was lacking; a simple story we've seen before and not much more than that.

The question for Revenge of the Creature was ho Universal would be able to push the series forward. Would it just be a retread of what we saw before, like many of its other Universal Monsters films, or would the studio actually try to do something new, give the Gill-Man a story to suit his awesome look. Unfortunately, Universal of the era rarely ever took risks with its monster films, and Revenge of the Creature is, indeed, the tired retread I was dreading.

Despite seemingly dying at the end of the last movie, the Gill-Man is back, still hanging out in his Amazonian lagoon, eating fish and being the biggest predator in the river. That all changes, though, when a group of scientists comes to the "Black Lagoon" and, after a series of attempts, manage to capture the beast, whereupon they ship him back to the Ocean Harbor Oceanarium in Florida (which is an actual, real place). There, Prof. Clete Ferguson (John Agar) and graduate student Helen Dobson (Lori Nelson) study the Gill-Man to see what makes him tick (while the Oceanarium shows off the guy as a major tourist attraction.

Of course, the Gill-Man is not so easily subdued, so despite the fact that the Oceanarium does what they can to keep him in captivity (including chaining him to the base of his tank), the Gill-Man eventually breaks free and escapes, fleeing to the ocean where he spends his days terrorizing the beaches. Long term, though, the Gill-Man needs more. Having developed an unhealthy obsession with Helen, he starts stalking Clete and the lady as they take a romantic river-cruise. Soon the beast has the woman in his arms, leading the authorities to launch a rescue mission. Can Clete save Helen before the monster does something truly horrific? 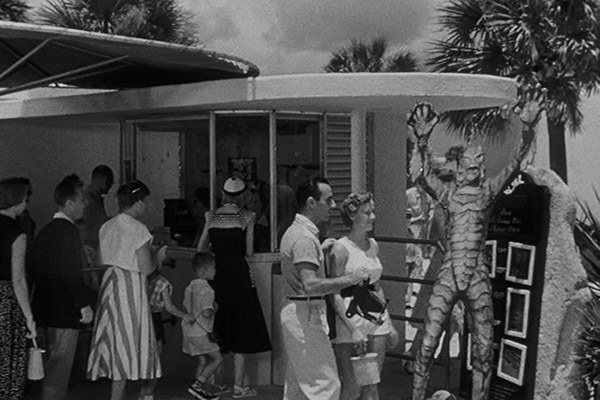 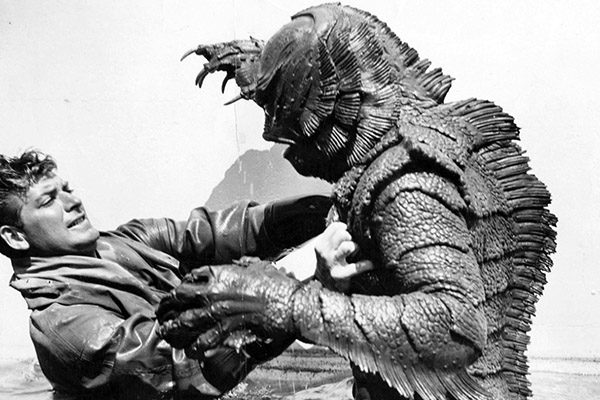 There were any number of issues I had with Revenge of the Creature, but among them the worst was certain the fact that it was, for all intents and purposes, the same basic movie as the first film. Yes, sure, the location has been changed from the Amazon to Flordia, but once the change is made we get the same basic story structure: the beast swims around, stalks a woman, while the men folk try to figure out what makes the Gill-Man tick. Eventually the monster grabs the woman, and then a long chase ensues. Whatever set dressing it wants to give us, the film is otherwise constructed the same, and follows the exact same patterns as before.

The odd thing is that the films never bother to explain why the Gill-Man is obsessed with human women. Assuming he's mostly fish (which the first movie clearluy established), it's not as though he can properly mate with Helen (or Kay from the first film, for that matter). He'd need Helen to drops some eggs in the water so he could fertilize them, as fish would do. Actually capturing her is besides the point. ALong with that, I doubt the ladies would give off pheremones that a fish man would care about as the Gill-Man hadn't even seen humans until the previous year. What is driving this beast to act this way (other than the fact Universal films like a good damsel in distress).

Also, let's not ignore the fact that a dive into the ocean, as the Gill-Man takes mid-way into the film, would kill him. The Amazon River is the largest fresh water river in the world, and that's the native home of the Gill-Man. Oceans, meanwhile, are salt water, and he can't put fresh water fish into a salty environment; it would kill them, as the scientists would know. The second the Creature went into the ocean, everyone should have shrugged and gone home because he's already done the job none of them could do, he executed his own death.

These are the things I was stuck thinking about while the movie droned on and on not really doing anything interesting with the characters. Sure, we have the love story between Clete and Helen, a tale that slowly reduces all of Helen's agency more and more. SHe's a grad student working towards he doctorate in ichthyology (the study of fish). However, the second she sees Clete she starts making moon eyes at him, and quickly she's talking about how all her friends have settled down and had kids, and maybe she doesn't really want to be a ichthyologist after all. The film takes a women working her way up and says, "nop, go be a housewife because that's what you were clearly meant to do." 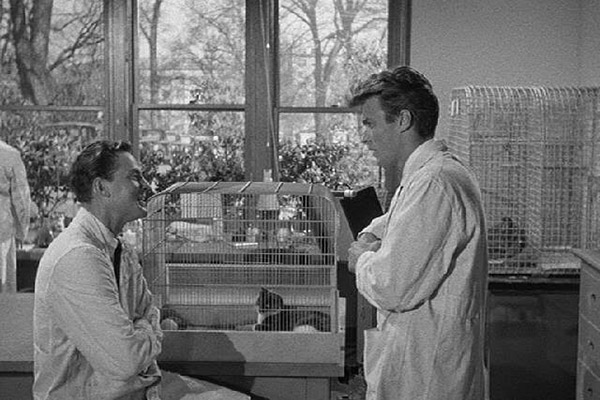 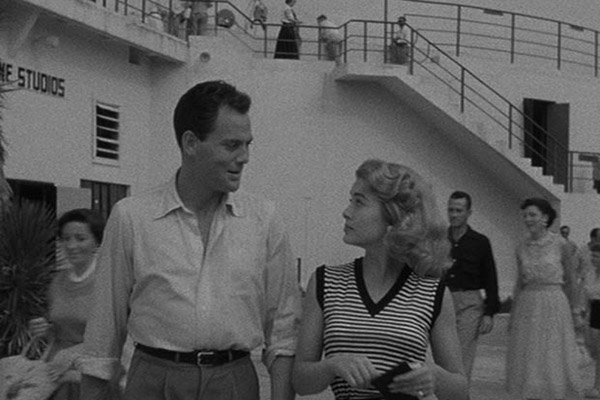 The Creature coming along and kidnapping her, knocking her own and making her a prize to be won by Clete just finishes the job the film had already started. The second the Gill-Man takes Helen, she had nothing else to do -- no lines, no actions, nothing. She's an ichthyologist but instead of having her find her own way to escape the Gill-Man instead it's up to CLete and some cops to rescue her. She loses all sense of herself, for a rote and "happy" ending, one where she's going to ditch the life she was working for to settled down as a housewife. That's just bad, 1950s plotting.

I don't know if I could ever get around all these issues with the movie even if it were better written or more engaging otherwise. What this film needed was a different story, one that didn't follow the same Universal Monsters formula to make another warmed-over rehash of these creature features. The Gill-Man is a great design, but we're two movies in and Universal has yet to come up with a compelling story for him. It's a tragedy, really.