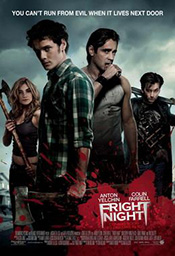 Charley Brewster (Yelchin) is a pretty normal high school teen. Once a nerd, he got a new girlfriend, Amy (Poots), and has been able to hang with the cool kids ever since. Life, though, would soon get turned upside-down all due to Charley's neighbor, Jerry (Farrell). As Charley's one-time friend Ed (Mintz-Plasse) would tell him, Jerry is, in fact, a powerful master vampire. As everyone lives out in the suburbs of Vegas, where the land is wide open, everyone has jobs on the Vegas strip at night, and people regularly move in and out of the city, it's a prime place for a vampire to live. Charley doesn't believe Ed until Ed goes missing. And then things start to add up. Soon, Charley is trying to get help from a stage magician, Peter Vincent (Tennant) and fight the hordes of the undead before everyone he knows, and loves, is dead.

I'm a fan of the classic Fight Night, but then I'm a fan of just about all the old and cheesy horror that has come along over the decades. The classic is certainly cheesy, but there's an 80s charm to it, so going in to the 2011 remake I certainly didn't see why we needed a new version of the film. Wouldn't all the 80s cheese be lost for something dumb and glossy?

The new film is certainly not a cheese-fest like the old movie but, quite intentionally, it's also not a big dumb blockbuster. Instead, the film treats the concept of vampires living in Vegas quite seriously, taking the time to build up the world of the film and the monster living within it. The allows the film to slowly build up and brew its dread, allowing Charley to sink deeper and deeper into the fear of next-door Jerry until the mid point when all hell breaks loose.

But while the movie has tension and dread baked into it, it's also very funny in places. Yelchin and Mintz-Plasse are both actors that have starred in a number of funny movies before this, from Charlie Bartlet for Yelchin to Superbad and the Kick-Ass films for Mintz-Plasse. However, the true comedic highlight is Tennant who absolutely revels in his role as Peter Vincent. Vincent was re-imagined for this movie from a horror-movie marathon host in the original (since, let's face it, who watches normal TV anymore) to a stage magician, a la David Blane, just with a vampire bent to his act. Tennant plays his character with foppish charm, delivering comedic lines with gusto (while also getting some very meaty dramatic moments as well). The movie wouldn't be as good as it is without Tennant. 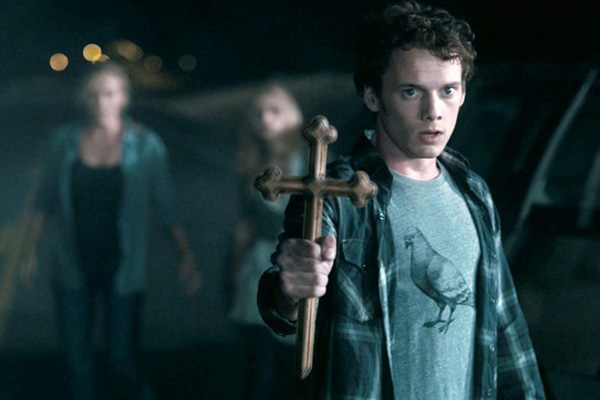 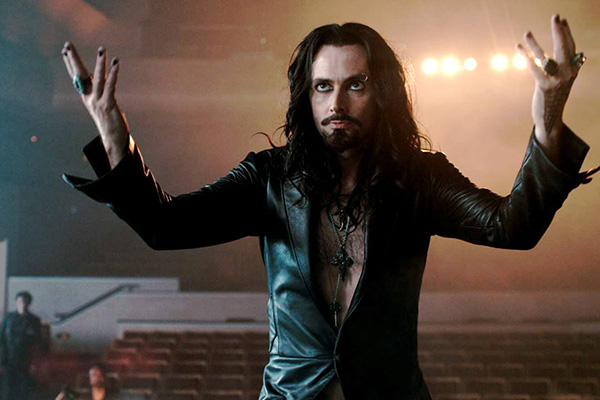 Tennant, however, is easily matched by an actor I never used to pay much attention to: Colin Farrell. Most of what I'd seen Farrell in (like the dumb but unremarkable SWAT flick) painted him as a pretty boy without a lot of talent. Here, though, Farrell really sinks his teeth (if you will) into Jerry. He plays the vampire as somewhere between cool guy and caged animal, often showing sociopathic delight in the people he's torturing. The big moments are great, but it's the little ones (like where Jerry is trapped outside a house, his eyes shifting as he stands in a door frame, sizing everything up) that sell the predatory nature of his monster even more. It's a fantastic performance start to finish.

However, while I love this movie so much, there are a few little issues with it. The biggest problem I have is with the over-use of CGI, namely with the vampire effects. While I think we've all gotten used to CGI blood spurts, they stand our pretty glaringly in this film. Worse, though, are the vampire transformation effects -- classically this would have been done with makeup and practical effects but the producers (possibly at studio insistence) went with CGI, and it just looks so terrible. There's a fakeness to it that no amount of time in the rendering bay could have fixed and it makes me long for the days of The Thing and proper practical effects.

Still, so much of this film works, not just well but fantastically so, that the issues with the creature effects are pretty easy to ignore. This is one of those rare reboots that outshines the original, and it does it by leaps and bounds. If you haven't see the 2011 remake of Fight Night you owe it to yourself to give this fantastic film a watch.