The Howling II: Your Sister is a Werewolf 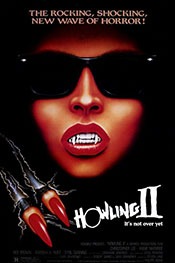 Sooner after the events of the first movie, we pick up at the funeral for Karen White. There, the deceased's brother, Ben, and her friend and co-worker, Jenny, mourn her passing in a seemingly senseless act of violence. The truth of what happened, though, is only revealed to them later by a preternatural detective/hunter, Stefan Crosscoe, who shows video-taped proof of the fact that Karen was a werewolf (thus the title of the movie) and that werewolves really do exist.

However, there's a bigger threat at large as the three have to venture to Transylvania to stop the rise and rejuvenation of a 10,000 year old werewolf, Stirba. This werewolf queen, who has magical powers as well, plans to spread the werewolf race far and wide across the globe and the only people that can stop her are our intrepid heroes and a few allies they'll collect along the way. It's a race against evil in the old country and only one side can win.

The best thing that can be said about The Howling II is that it's no where near as tedious as the first film. Where that movie seemed to want to craft a slow, methodical tale, one that ignored the trashy potential of it's plot, Howling II goes all in on the b-movie charm. Unfortunately while the sequel remembers that this is a trashy b-movie it completely forgets to have anything near a cohesive plot.

What works about the movie is how dumb it is. Much of the movie plays out like the 1980s distilled onto film. After the opening funeral we shift gears to a punk rock scene in a shitty little nightclub, one where you just know the band on stage is going to get to play, at length, the song they wrote for the film. It's some new-wave hit meant to launch a top 100 hit single (but probably didn't even chart at all), one that goes all in on the werewolf metaphor and liberally name-drops the word "Howling" in its lyrics. We then follow the punks as the chase after a pretty punk lady only to have her then turn out to be a werewolf (because of course she is). As poorly plotted as this section of the movie is, it works for the genre and I could have enjoyed a film like this. 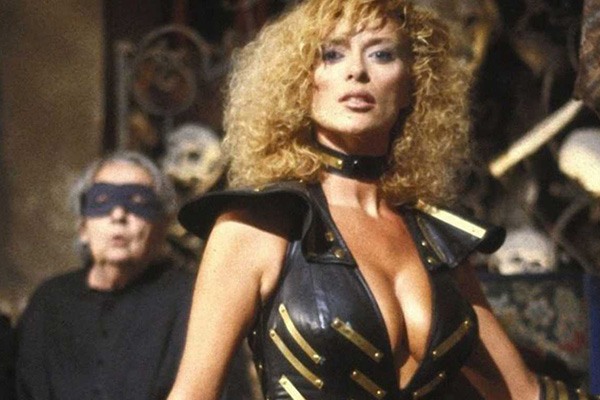 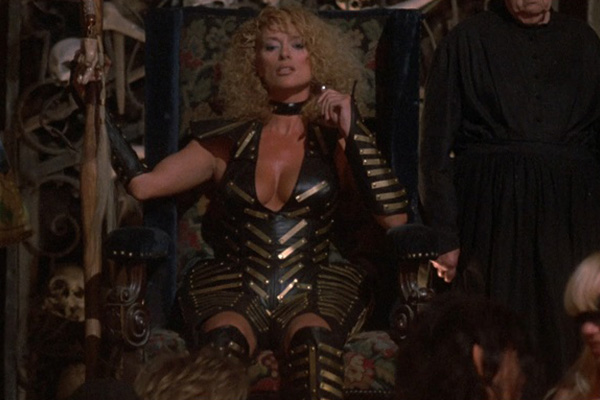 Sadly, and these are not words I use lightly, Christopher Lee then took center stage. Don't get me wrong as I absolutely love watching Christopher Lee in just about anything he's in. He can elevate his own performance and make terrible lines sound half-way logical. Unfortunately what the man cannot do is elevate bad actors, bad pacing, bad writing, or a truly terrible movie. The two people he's forced to play off of, Annie McEnroe and Reb Brown, are incapable of acting at any level. Brown has one basic emotion, smiling indifference, while McEnroe seems eternally surprised to be in the movie. Trust us, lady, we're all surprised anyone thought you were a good enough actor to be in this film. That includes Christopher Lee who, reportedly, was so unimpressed with the rest of the actors he tried to perform every scene he could by himself.

What happens, then, is that Christopher Lee's character is involved in the largest storyline of the run, which amounts to little more than a travelogue of a Transylvanian town that, occasionally, features some weird, creepy people that may or may not be werewolves (for the most part it's never really revealed, just poorly hinted). Occasionally the film cuts away from this completely (not) thrilling adventure to show us the Stirba and her werewolf cult. The problem is that, until the last five minutes or so, the werewolf cult and the heroic travelogue never connect. It feels like two very different movies, one a sedate attempt at a thriller featuring everyone's favorite Dracula, the other a bug-nuts crazy orgy/werewolf film where lots of weird things happen (including some of the least-sexy gratuitous nudity every committed to film) but nothing is every explained.

For instance, what exactly does Stirba, the werewolf queen, want? Sure, we keep being told she's evil but, for the most part, she just stays in her castle (wearing some truly impractical outfits) and has lots of furry sex (no joke). You get the feeling that if the heroes didn't bother disturbing her, Stirba never would go outside or, really, do anything of consequence. So what's the point, really, of hunting her down?

Plus, I feel it's important to go back over the fact that Stirba is, for no-explained reason, also a sorceress. None of the werewolves in the first movie showed any magical abilities, and yet none of the characters in this new werewolf-sex-cult seem to thin a 10,000 year old sorceress/werewolf is at all weird. This then couples with Lee who is plainly playing a vampire-hunter trapped in the wrong movie (he attacks werewolves with holy oil, garlic, and metal stakes!) and you end up with a movie that truly has no clue what kind of story it wants to tell, and can't reasonably settle down for five minutes to even begin to move us in the right direction. The weirdness of the movie eventually becomes a monotone terribleness, one you may have to fight to stay awake through. 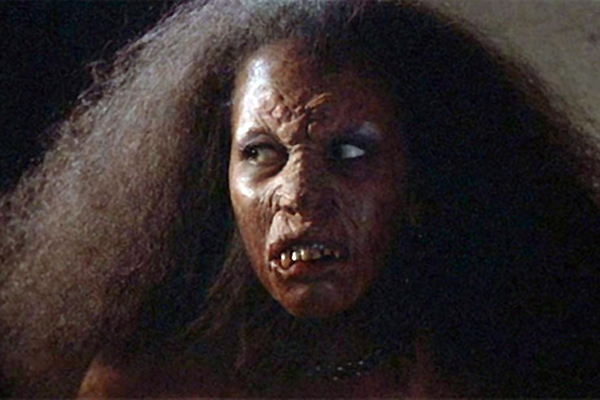 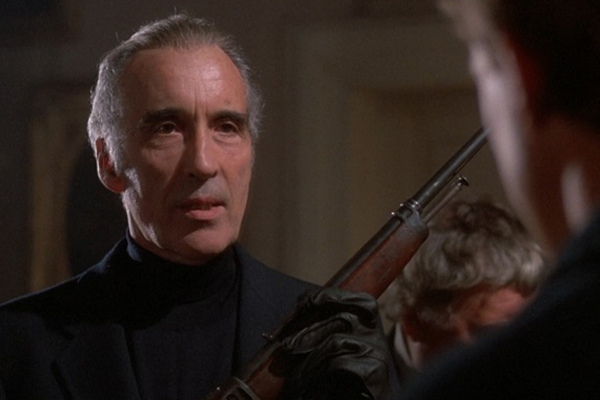 And then (and this isn't really a spoiler to the plot, just the general weirdness of the whole thing) the movie ends on a music video for the main theme song, once again performed by the featured band but liberally cut with footage from the movie (often showing the same scene over and over again). It's ridiculous and feels like it came from a completely different cut of the movie, one that was at least way more ridiculous and over-the-top than what we got. I would have enjoyed that version a lot more.

If it's not clear by now, The Howling II is not a good movie. It's not even in the same league as good movies. I've watched enough truly terrible flicks that I'd prefer never to watch again over this awfulness, but it's still really hard to sit through. It's not bad enough to be fun, nor is it always in on the joke of it's own awfulness. It's just mediocre all around and a film I don't think anyone really has to watch. Skip it but be warned: I don't think the series gets any better from here.