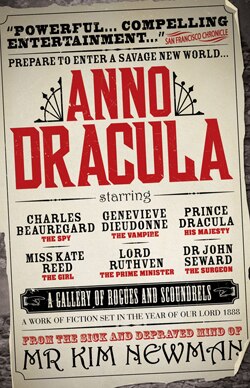 It certainly seems like Dracula, Bram Stoker's novel of a vampire lord that inspired many vampire fans for decades to come, has lead to the most adaptations and interpretations of any fictional character ever (with a close second, of course, being Sherlock Holmes). Because of the character's place in the public domain, anyone is able to take the character and insert them into whatever work they want, from an unofficial sequel to a reinterpretation of the original story (insert my own plug for my Dracula script), or just some tangential work that so happens to feature the Transylvanian vampire lord. Dracula will always appear again and again.

That segue leads us into Anno Dracula, a novel that very much comports itself to be a sequel to the original novel... sort of. In construction is absolutely takes place after Dracula, but with the twist that instead of the fearless vampire hunters saving the day they, instead lost. Most of them ended up dead and Dracula went on to take over England. The novel is a bit alternate fiction, alternate history, mash-up of everything vampire 9and 1880s fiction) related, all mixed up into one. And, at times, it works pretty well. It just doesn't work all the time.

Picking up a few years after the events of Bram Stoker's novel, Anno Dracula finds an England very much changed by the rule of Dracula. The vampire lord took over (as the vampire hunters were afraid he might do), ingratiating himself into the court of Queen Victoria before taking her as one of his vampire brides and becoming the ruling Queen Consort. His children spread far and wide, giving their dark gifts to the common populace of merry old England. Now so much of the population are vampires, but not all of them are healthy. It seems that Dracula's stock is tainted and the further you go down the line of descent the worse it gets with mongrel vampires coming out at the low end, so mixed up and mangled by the transformation into vampires that their bodies can barely survive at all.

Into this mess of London we meet three important characters. The first is Charles Beauregard, an agent of the Diogenes Club (from Sherlock Holmes tales), the functional under-government of England. Charles has been tasked with hunting down the Ripper who has been attacking vampire whores around Whitechapel and sending them quickly to their foul and bloody grave. Aiding Charles is Genevieve Dieudonne, an elder French vampire (who still looks like a young French woman). Genevieve works in Whitechapel as a healer, running a hospital for vampires, and she has knowledge of all circles of vampire society. And then there's Dr. John Seward, who also works at the clinic. He has a dark secret, though, because he really is the Ripper and and he has to hunt and kill vampires to sate the guilt he feels over the death of Lucy Westenra. These three characters, and so many more, circle each other as the darkness of Dracula's reign extends over all their lives.

Anno Dracula is an interesting book, to be sure. Using London (and more specifically Whitechapel) as it's focal territory, the book develops a strong world around its characters. I certainly found myself absorbed by the concept of the book, its setting and its characters, all of which felt very rich. I honestly could have read more than one book set in this place, and this time period, as author Kim Newman really nails the world-building in Anno Dracula.

I also really liked the lead characters of Charles and Genevieve as they have the most depth (and, not unexpected, the most focus) in the novel. Charles is a proper English gentleman, controlled by propriety. he also has a past in the military, though, and the times where he has to balance being a gentleman against needing to be a warrior certainly bring out the most interesting facets of his character. Genevieve, meanwhile, gives a perspective the book would otherwise completely lack. As an elder vampire (one even older than Dracula) she's seen it all and been around the world twice. She has that world-weary edge, mixed with a remoteness as she doesn't want to be connected to the world again, doesn't want to get attached to people only to lose them (as she will because she'll outlive them all). But there's a softness to her, too, that inner teenager that she maybe never totally lost, and the dynamics between her side give her so much depth.

Where the book falls apart is on the Ripper side of the equation. John Seward, in comparison to our other leads, is a flat and uninteresting character. He's the nominal villain of the piece, but he's so far 'round the bend that it's hard to get into his mind-space at all, let alone care about him in any capacity. The Ripper is a being shrouded in darkness, bathed in blood, but somehow by putting the Ripper story on Seward the book manages to drain all the dark and gory fun that could have been had. Maybe it's because Seward was an already existing character and no one made for the book so the author didn't have the same connection to him, but it just doesn't work.

Also not really working in the novel's favor are all the references to other vampires and fictional characters. It as amusing when Erzsebet Bathory is mentioned at some point, but the novel also has to drop references to more fiction vampires, from Carmilla to Blacula, name-checking all of them as if to say, "hey, look at all these characters I could work in." Then there's further notes on Sherlock Holmes, Bram Stoker, Oscar Wilde, Gilbert and Sullivan, and on and on. Some of these people really did exist during the Victorian era, but eventually it feels less like the novel is trying to build a realized, connected universe for all these characters than simple saying, "isn't it amusing to have them all here?" It annoyed me the same way Read Player One did and for the same reason: reference isn't the same as legitimately using the characters for expanding the story. It's all shallow and sticks out poorly after a while.

The book does, by and large, manage to skirt past its worst failings, always relying on Charles and Genevieve to carry the meat of the story when all else fails. It gets some legitimate momentum by pairing the two up and letting them explore not only their adventure together but also a burgeoning romance between vampire and human. Unfortunately, right as the book feels like its starting to really take off it comes to an end. The novel has a climax at Victoria's court that feels absolutely rushed while, also, barely acting as a functional ending, all before the book just abruptly stops. It's like a film where you get two-third of the picture and then up comes "Fin" before the credits roll. We don't get closure with characters, or even with the main thrust of the story (that being Dracula's reign and the damage its doing the England). Instead that's all, maybe, saved for a future novel (the direct sequel takes place during the great War in Europe). If you wanted this novel to tie up enough to feel like a complete story then you're going to feel left out in the cold.

Kim Newman has a decent writing style and they do know how to write compelling characters and set an evocative world around them. I just wish the whole of the novel could have been as good as many of its parts. I'm sure I'll eventually pick up the sequels to this novel just to see where the world builds from here, but I'm less excited about it now than I could have been with a more solid ending. Sometimes all the tricks in the world won't mean a thing if you don't stick the landing.