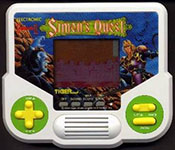 Back in the day, Tiger Electronics was known for making (decidedly less-than-impressive) games for just about any random property they could. These games were meant to entertain children on car rides and so forth, since portable gaming hadn't really become a "thing" yet. Anyone that has ever owned a Nintendo "Game and Watch" game will understand the basic premise of the little units.

While the theory behind them was sound, the production of the various games always proved to be less than the sum of its various parts. Tiger games always ended being cheap and terrible, no matter the property they were adapting or the game they were attempting to produce.

The single biggest knock against any Tiger game, Castlevania II especially, was the complete lack of real control. There were only ever a few frames of "animation" available for whatever character you were controlling, and with a minimum of abilities (usually one or two max), you were limited to basic memorization and timed button presses to clear through any of the games.

Such is the case with Castlevania II. Simon, while appearing large and imposing in this game, is limited to walking right (or facing left to attack enemies behind him), jumping, and attacking with either his whip or daggers. There's no scrolling back, so if you want to "run" from an enemy (or get a good running jump at some of the longer jumps in the game), you're not going to be able to. And, really, saying you can "run" or "walk" is deceptive -- Simon is always centered in the screen, and the "grid" of the game means that he moves one block over each step. There's no inching, nor any speed running.

The lack of a "run" actually makes the game near-impossible to complete. This reviewer, having actually owned the game, played it on several occasions (sadly). By the third level, larger pits show up, and you have to try to jump them -- a feat I was never able to manage. But then, I also wasn't really sad. Even though I was 7-years-old when this game came out, I realized I wasn't missing much not being able to get further than the third stage.

The biggest issue, though, is just that this game was made as a Castlevania II port. The entire run of the game is to get to Dracula by traversing his castle. There's nothing in it to relate more to Castlevania II instead of Castlevania. I know, expecting merchants, collectable items, exploration, or even finding pieces of Dracula that you have to put together is a lot to expect from a game with a limit of 12 or so sprites (for everyone, monsters and hero alike), but if you're going to call it Castlevania II, perhaps it should tie in at least a little better to the originating property.

For the novelty factor of the game's existence -- the fact that Tiger made it, and Konami actually licensed it -- it's amusing to see once. Unless you found it for $1 at a garage sale, though, you're overpaying for this forgettable experience.

Also, of note, there was a watch-shape version of this game as well. The controls for it are even more limited, but the basic function of the game is, more or less, the same. That also means, of course, that the game itself is still pretty crappy. The novelty is still there, but there's little to recommend this game in either form factor.