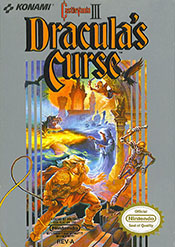 During its golden time, the NES began pumping out great titles that pushed what the 8-bit system could do to its very limits. Games like Kirby's Adventure, Super Mario Bros. 3, and many others reside within this era. Castlevania III: Dracula's Curse joins these great games, showing just how far the system could go.

The third of the NES-based Castlevania games is also the last one to come out for that system. Konami packed a very large game into the "tiny" cartridge, including programing with a couple of custom mappers to give the game enhanced graphic effects, such as rotation and parallax faking. It gives the game a lush, artistic feel even though it's on the NES.

In this jewel of a game, you play as Trevor C. Belmont, the third recorded Belmont in the Castlevania Timeline to take on Count Dracula. Trevor is the forefather of Simon Belmont and Christopher Belmont -- and, for a while, was considered to be the "first" Belmont in the vampire huting family. Once again (or, rather, for once, depending on how you look at it), Dracula has arisen and must be defeated. The story, as described in the nice movie-style intro, describes the Belmonts as a clan of people with super-human powers who were banished from the countryside of Transylvania by the townspeople. However, when Dracula's Evil returns, they find Trevor, a "mighty Belmont" and ask him to return and stop the evil.

System-wise, the game plays very much like the original Castlevania (and very much unlike Castlevania II: Simon's Quest). You do not level up in this game, nor do you get experience points or purchase items. This is a pure action-platform game in which you go through a linear stage and fight an "Ultimate Evil" at the end. But just because Castlevania III features the classic formula, that doesn't make the game a step back for the series.

As Trevor traverses the lands of Wallachia, multiple paths will open to him. These paths will take him through a variety of stages -- fifteen total, although you won't see all of them on any given playthrough -- and this variety gives the game solid replay value. Roughly half of the stages in the game are set outside of the castle, allowing you to go through a large amount of landscapes (which Konami named some pretty funny names, like "the Sunken City of Poltergeists", "the Clock Tower of Untimely Death", and even "The Haunted Ship of Fools"). With nice background animations, beautiful backgrounds (for its time) and a wide array of enemies, Castlevania III delivers a great gaming experience that you will likely come back to again and again just to see it all.

More importantly you don't just have to play as Trevor Belmomnt. Castlevania III was the first game in the series to introduce other heroes to aid (and play as) in the main quest. These heroes include:

Of these three helper heroes, you may only journey with one at a time (leading to a total of four different endings, including Trevor on his own). Adding the multiple heroes, along with multiple paths, and you've got a great, replayable, game with a lot of depth.

What's even better is that the music is packed with great tunes to carry you through your journey. Many of the songs as classics that get reused time and again in later entries in the series, such as "Clockwork", "Aquarius", "Nightmare", and "Beginning". The depth and power of the soundtrack is an achievement for the NES.

The graphics, though of NES quality, are more detailed and varied than the original game. There are a large amount of animated tiles in the backgrounds of movement stages (such as the Clock Towers). Block 3 in the game (the forest) has a nice graphical effect that fakes parallax scrolling nicely. Some action stages have some surprises that add to the challenge, such as automatic scrolling, rising water, crumbling bridges, falling towers, and others. Since the game is timed, you can't stop to admire the scenery, but most of the stages are different enough so that the game never feels like it's repeating old graphics (even with two different Clock Towers, for example).

The game's sound is bright and beautiful, and quite varied. The songs match the stages perfectly, as well as add a mood to what the characters are doing. "Pressure" will play when you have to do something in a hurry, or escape someplace. "Anxiety" will play in the most lonely of stages, where you don't know what will be coming up out of the shadows to attack you. And in one stage, the haunting "Nightmare" tune will just plain creep you out while you try to go through a cavern in the game.

There are fourteen background songs, and even more songs that depend on what is happening (meeting a new ally, fighting a boss, entering your name at the Password screen, etc.). Access to the sound test is as easy as holding the A button as you hit Start at the title screen. Sadly, the Japanese version of Castlevania III uses the Konami sound chip, the VRC6, which implemented more channels for the sound, giving the Japanese version a richly detailed soundtrack that the US version (which just uses the regular NES sound chip) lacks. Still, the music is great on both versions.

The gameplay is much like the original game, with variations depending on who you pick as your partner throughout the game. You can play as Trevor for classic control, NES CV style, you can play as Grant for controlled jumps and wall climbing, you can play as Sypha and use enemies as stepping stones, of you can play as Alucard and just fly wherever you need to go. As a result, the variety of the gameplay is top notch. The game's controls suit the game styles, and if you're used to the preceding games in the series, you'll be right at home with Castlevania III.

Let's add this all up: fifteen stages to go through in, with a minimum of three runs in order to see all the stages. Three different characters who you can choose as your partners throughout the game, each with a different storyline and ending, and each with different powers and control styles.

Toss in there the variety in top-notch graphics and stimulating sound. Lastly, the game has a good challenge, making you work for the ability to get through it without ever feeling like it's "cheating".

What you've got, then, is an explosive blockbuster hit game. If you're at all a true Castlevania player, you must play this game. It may be hard (it won Nintendo Power's awards for Most Challenging game when it came out, way back when), but it's not impossible. Perseverance will grant you access to one of the most interesting games in the series.