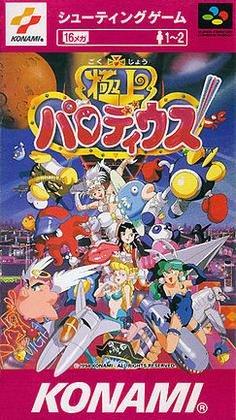 I am not, traditionally, and shoot-em-up player. While I can enjoy the genre, the games tend to require a high level of skill to be able to get past the first couple of stages in any given title. This is largely because most shoot-em-ups have a baked-in tough difficulty: you have to collect power-ups to make your ship strong enough to take on the hordes of bad guys, but one false move will lead to an instant death, and then you're back to square one with the default, piddly fighter once more.

Defeating these games requires you to be incredibly skilled in the genre, able to not only memorize enemy patterns but anticipate their attacks and lead your shots so you can handle everything without taking damage. I'm not generally that good at these types of games, so while I can fully get behind flying off into space and shooting things while a pulse-pounding soundtrack plays in the background, the hordes of aliens generally win quite quickly.

That being said, I had a vested interest in getting through Gokujo Parodius because it features Kid Dracula in a playable form, one of the many heroes to go off into space to shoot at all the strange and bizarre creatures featured in this title. This is a Castlevania site so anything even remotely Castlevania related has to be covered in detail.

Gokujo Parodius is actually the third title in the Parodius series (following on from Parodius and sequel Parodius Da!). It is the first, however, to have Kid Dracula (or any other Castlevania-related characters), marking this as the first game in the series to concern this site. The games play as a mix of Gradius and TwinBee, Konami's two premiere shooting titles, and the first two titles had only ships from those series. But here, we have not only Kid Dracula but Goemon, Opa, Hikane, and so many more, transitioning Parodius into a full-tilt mascot series. 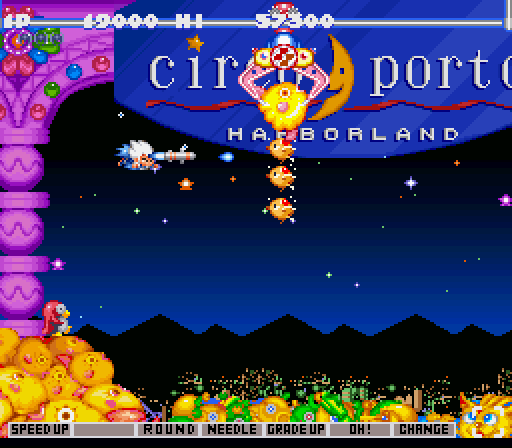 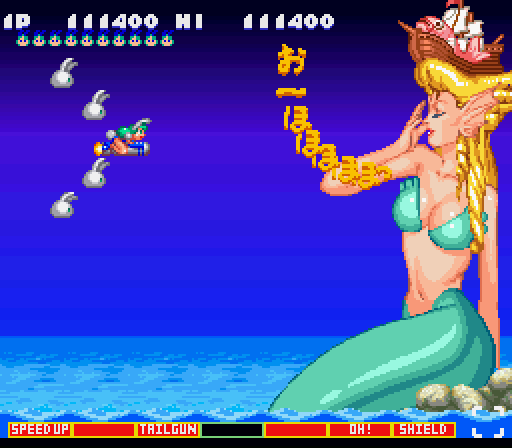 At its core the Gradius and TwinBee mechanics are maintained. Your ship (or "ship" in the case of the some of the characters, like Kid Dracula) flies from left to right, shooting everything that gets in its way and avoiding all the shots the enemies will fire. This is necessary because, as with all games in this genre, one hit will turn your basic ship to ash and you'll respawn without any power-ups you may have collected along the way.

The power-ups are key to progressing in this game because you're not going to get far trying to take on the increasingly difficult (and packed) hordes with just a default pea-shooter. Following the Gradius mechanics, you'll collect power-up orbs that will fill the bottom meter of the screen. At any point you can accept the level of power you've earned up and get the appropriate piece of equipment for your ship, with each of the playable characters having their own load-out of weapons. In the case of Kid Dracula, he'll earn up torpedoes he can shoot directly in front, as well as either a wave of bats that will cascade outwards from his ship (which is great for linear enemy control and racking up damage against bosses) or a set of homing missiles (that look like umbrellas) that really help for crowd control. Also, and this is the best power-up for longer-term viability in the game, a full power bar will grant Kid Drac a set of ablative armor, allowing him to absorb three hits before the fourth leads to death. Very helpful indeed.

Along with the Gradius power-ups there are also TwinBee bells. The default yellow bells some enemies will drop are just worth points, but shooting them can change the color of the bell, granting you temporary, devastating powers. Kid Drac can transform into a huge version of himself, no longer able to fire but able to deal massive damage (per frame, from what I saw while playing) to anything he touches. He also could lay down a laser barrier once, which would damage all the enemies that ran into it. The bells add a solid, additional level of control and variety to the power-up scheme, which you will need as this game gets pretty rough the deeper into it you get.

Although Gokujo Parodius started as an arcade game, its the Super Famicom release I played and reviewed because Kid Dracula wasn't in the original release. The game looks great for a Super Famicom title, but you can tell that the system is struggling to keep up with the title. When Kid Drac is firing full tilt, missiles and torpedoes filling the screen, while enemies are flying in any which way, there is noticeable slow-down. Sometimes this can be helpful, such as being able to better see and respond to enemies, but there is no worse feeling than seeing an attack coming and slowing down to a crawl as you try to avoid it, knowing you can't, so it becomes a slow-mo car crash. 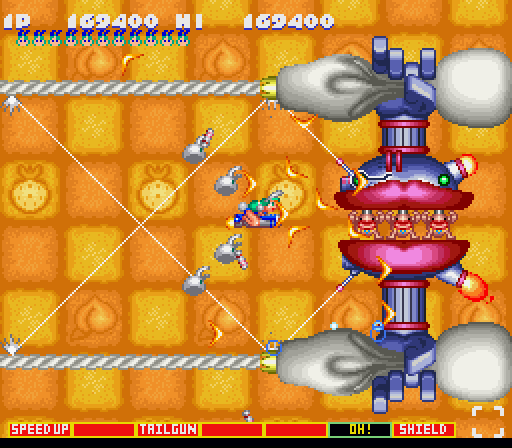 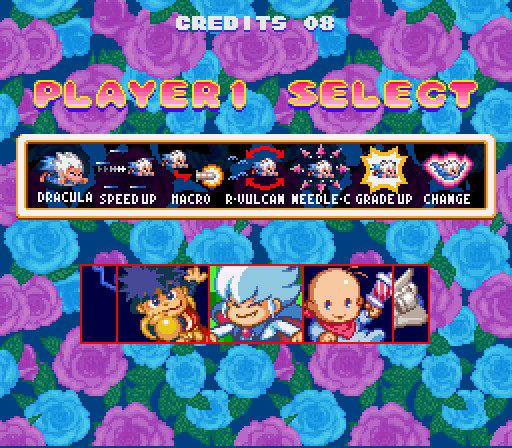 While I generally enjoyed the oddity of the graphics and stage design, I did feel like the game fell flat when it came to the music. The entire title is filling with Super Famicom remakes of classic public domain anthems and dance hall tracks. I'm not sure why Konami settled on this soundtrack for the title (maybe it was a cost-cutting measure since they didn't have to pay any artists for their songs) but it certainly feels weird to go shooting through a candy-colored stage while "Yankee Doodle" plays in the background. This was the one place where the game just didn't hook me.

Overall, though, this was a fun and enjoyable package for what it was. If you're good at this kinds of titles you'll have about a solid hour of game-play here to enjoy, with all the strange and fun flourishes a Parodius title promises. Even someone at my skill level was easily able to get through the first three stages, and the rest of it, while a struggle, never felt unfair (just hard to manage). This is probably one of the easier shoot-em-ups I've ever played, which might make it less impressive for your average hardcore fan of the genre.

But then, deep down, I don't think this game was meant for the hardcore fans of Gradius (TwinBee, with its candy-coated aesthetic, is a maybe) -- the art style for Konami's hardcore space shooter brings in different players than this strangle melange ever could. No, I think this game exemplifies Konami kicking back and just having fun. This third Parodius title is the company putting its feet up and cranking out a fun blast-em-up for everyone to enjoy. And, if you got people to pop a few quarters in, or plunk down a chunk of change for a cartridge, all the better. Its fun, breezy, and enjoyable, the perfect first taste of the series for this dedicated Castlevania fan.