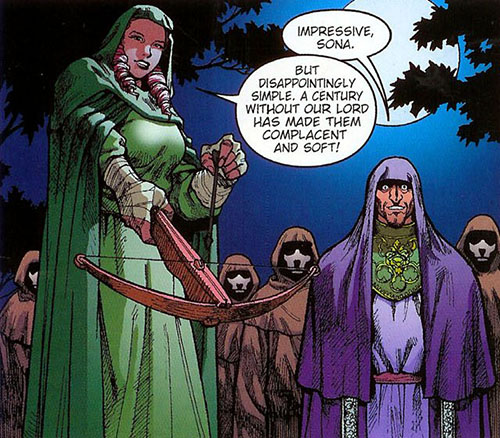 It's interesting to note that the Castlevania series does very little with the Brides of Dracula. Although prominent in Bram Stoker's orignal novel, which itself was tied into the main continuity via Castlevania: Bloodlines, the motif of the Brides has been left largely unused bu the games of the series. No battles with vampire brides, No threats from Dracula to turn all the ladies of the Belmont clan into his vassals. In fact, we only really ever get two nods towards it in the series: one when Annette is turned into a vampire (on a "Bad Ending" play-through of Rondo of Blood, and the inclusion of Mina Hakuba and an obvious nod to who Soma Cruz really is.

While it may not be a motif played with often by the games, the idea of "Vampire Brides" is very prevalent in the American-published comic series Castlevania: The Belmont Legacy. Here, Draculais all about his brides. Or, well, one bride: Illyana Belmont. This displeases the one woman willing to be Dracula's dark lover, Sona Bartley. A cultist who helped to resurrect the Dark Lord, Sona wans nothingmore than to stand by his side but Dracula's plans for revenge against the Belmont clan leaves him uninterested in her advances.

It's an interesting story idea for the character, and one that could have been explored further in additional works. Unfortunately (well, from a storytelling perspective as the actually comic was bad) there was never a sequel series produced so its hard to say if the idea of "Vampire Brides" would have continued on in the comic down the road. And Konami never did anything further with the idea, leaving it as just a curious thought never pursued again.

As the niece of the nobelman Ivan Bartley, Sona was provided a high station and all the finer things in life. All but one: she craved a strong powerful man on her arm and her immediate thought was to capture the eye of the young ruling lord, Christopher Belmont. That noble, though, only had eyes for another young woman, the fair Illyana Riktor. Sona's jealousy grew as she wanted the two love birds, but there was little she could do to split them up.

However, her uncle had his own plans in place that, eventually, could land to her getting exactly what she wanted. As master of the dark arts, Ivan built up a cult of Dracula, worshipping the Dark Lord (in fact, he'd champion Dracula out on the streets of their village, loudly and publicly). Sona, growing up in his house, learned all about these dark ways and, eventually, she realized that if she couldn't have the Belmont she'd have the vampire instead. On the night tha Christopger married Illyana, the Bartleys resurrected Dracula in a dark ritual.

As Ivan and Sona shared a meal, celebrating their win, Sona put her own plans into effect. She violently beat her uncle, seizing control of their cult. She then went to Dracula's crypt, giving her blood to the vampire lord. This fully restoredhis powers and, in the process of him feeding on her, turned her into a vampire. They then made love, as only vampires could do, and Sona likened herself as his "vampire bride". It was exactly what she'd dreamed... right before Dracula threw her aside.

Her familiarity with him was something Dracula couldn't stand and Dracula violently punished Sona for her impudence. He then flew off to find a bride more to his own liking, that of the Belmont's lovely bride Illyana. Rebuffed, Illyana slunk back into the crypts to await when her master would return. And soon enough he did, dragging Christopher's bride with him. Sona helped Dracula chain Illyana to the wall of the crypt and then, as the woman came to, Sona was there to taunt her. Sona would have attacked and fed on Illyana, too, were it not for Dracula forcing her aside. She could only watch as Dracula gave Illyana of his own blood, beginning the process to make her a true vampire bride.

The process would have been completed, too, except for the fact that a heroic team led by Christopher, found the crypt and invaded. Sona was defeated first, beheaded by one of Christopher's warriors, the Romani woman Pascha. And as her life left her corpse she could only watch as her dark love, Dracula, was handily defeated by Christopher, all her plans up in a (quite literal) flash of holy fire.

The Bartley name is an obvious reference to Elizabeth Bartley, the niece of Dracula and the one that aids his resurrection in Castlevania: Bloodlines. Were this cmic in official continuity there is no doubt that these Bartleys would all be related in some fashion.