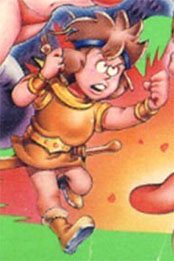 Editor's Note: Simon Belmont III comes from a parody sub-series of games from Konami. We mention him on this site for completeness sake, but his adventures are not part of official Castlevania continuity.

The days of the NES were an interesting time. Companies would often put out strange and playful titles seemingly fueled less by a desire to make money than to give life to the weird acid flash trips they had in their head. Now, of course, we're being funny and editorializing, but sometimes it did seem like game companies were more interested in entertaining themselves than making games the rest of us would have wanted or expected.

But maybe that just us, and we're from the United States and not Japan. The two cultures are very different, and many of the classic titles that we look at and say, "what the hell?!" were made for Japanese audiences and never released here in the states. Case-in-point was Konami Wai Wai World, and game designed as a sort of "best of" of Konami, and way for fans of the game company to experience a weird adventure with mascots from across the various Konami franchises.

Konami Wai Wai World featured two starting heroes: the creatively named Konami Man and Konami Lady. These two heroes were tasked by Dr. Cinnamon with traveling to the various Konami worlds (including Castlevania) and rescuing the heroes of those games, all in an attempt to stop the evil Waruda...

The first Konami Wai Wai World follows the adventures of Konami Man and Konami Lady as they venture to various Konami worlds to rescue Konami heroes (every time you say "Konami" an angel gets its wings). Simon Belmont III is trapped in the Castlevania world (which, it should be noted, was based largely on assets from Castlevania II: Simon's Quest). There the two heroes have to fight Dracula who has Simon prisoner.

Once Dracula is defeated, though, Simon Belmont III becomes a playable character, and he's able to aid the Konami heroes in exploring the other Konami worlds and saving the universe of Konami.

The second (and so far final) game in the Wai Wai series of platformers followed the adventures of Rickie, a robot created by Dr. Cinnamon to aid the lands of Konami. Throughout his adventure, Rickie is able to collect power-ups that let him, temporarily, transform into various Konami heroes and, of course, Simon Belmont III is one of those heroes.

Although, we should not that the character is only called "Simon" this time around, so it's not confirmed that the robot can turn into Simon Belmont III. However, Konami started this mess by making the hero in the first Wai Wai game Simon Belmont III instead of just Simon. We at the Inverted Dungeon are just choosing to be internally consistent when discussing this series.

As it is, though, Rickie is able to travel to the various Konami lands, and the last world he visits is one based on Castlevania III: Dracula's Curse, all before fighting the villain of the game, Warumon.