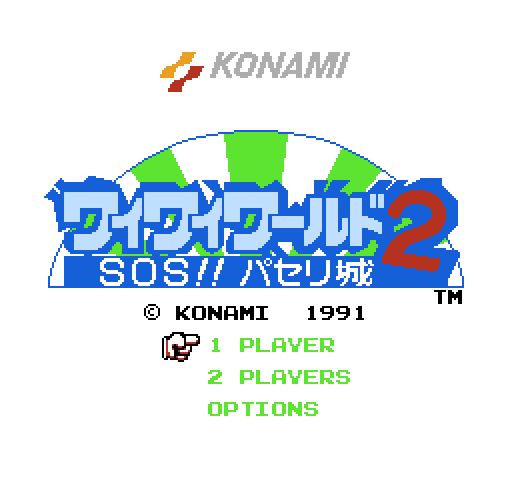 We really can't discuss this game without first ackowledging that the first title, Konami Wai Wai World is a deeply strange, silly title. A kind of Metroidvania game where Konami's various characters and titles overlap and interact as if they were all in a kind of shared universe (including the Goonies and King Kong), Wai Wai World goes right past bizarre and comes out the other side. It's fun but so, so weird.

Plainly, though, it was quite popular as Konami went back to the well three years later for a second Wai Wai title. Released in 1991 as another Japan exclusive, Wai Wai World 2: SOS!! Parsley Castle doubles-down on the weirdness for an adventure where Simon Belmont, Getsa Fuma, and a literal baby will all fight together to defend the fictional Konami universe from the evil wizard Warumon. This time designed in an odd, super-deformed style, the game sets aside the Metroidvania formula for something more basic. Essentially a run-and-gun platformer more in line with action-y Castlevania and Contra titles, the game sacrifices the exploration for a more traditional platforming narrative.

And that might be why further Wai Wai World titles never materialized -- this game strayed too far from what worked in the first game, playing it safe in a game that should be anything but. And sure, it's fun to play as the various Konami characters, seeing levels inspired by all the titles, the game lacked the overall weird zest that made Konami Wai Wai World so weirdly magical.

Konami would go on to produce a number of other odd titles (especially once you go down the Parodius well), but the Wai Wai World series would end at just two titles.

Some things have been improved since the first game. The difficulty is somewhat easier (even if the health drops are less plentiful), with enemies less likely to be able to pull-off "gotcha" moments (much of this because the character is properly centered in the middle of the screen).... There are some questionable changes, though. There are too many auto-scrolling stages, especially at the start, where the first stage is an auto-scrolling platformer that just seems to go on forever. This is then followed up by an auto-scrolling shooter on the very next stage. If the player chooses the right paths, they could even end up with an extra shooter, making half the game auto-scrollers. For what should be a light and fast platformer, that's a lot of time watching the screen slowly scroll by.