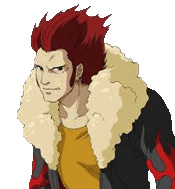 When series producer came up with the idea to kill of Dracula, fully and completely, he spun the series in a new and interesting direction. Not only did it allow the rebon Dracula, Soma Cruz, to become a hero in the game but it also allowed for a new collection of "potential" Dracula hosts. Each with their own taste of Dracula's power (and the magical shockwaves from his death spread over the world), they each had their own flair while still, in a way, tapping into teh dark lord's power.

Dario was one of two of these potential candidates to feature in Castlevania: Dawn of Sorrow. An evil guy with a flair for fire, Dario certainly had style. Unfortunately he didn't also have power to backup his claims, not in comparison to Soma (or Dmitrii, another candidate from Dawn). But he did have a luxurious mane of hair, and that's not nothing.

Okay, it's mostly nothing, but you gotta admit, that is a superb hair-do. Nicely done, Dario.

Born at the time of Dracula's death (in 1999 AD), Dario was infused with dark magic upon his birth. Due to his natural magical talent, Dario grew to be a powerful pyrokenetic. He used this skill to become a master criminal with a flair for the fiery.

Seeing the potential power within Dario, Celia Fortner, leader of the Dracula-woshipping cult With Light, brought Dario into the fold, grooming him to be one of two potential hosts for Dracula's power. The only problem was that Dracula's soul had already found a host: Soma Cruz. To fix that, Celia had a replica of Dracula's castle built (and populated with demons). Secreting Dario (and the other potential host, Dimitrii Blinov) at the castle, Celia lured Soma in there, potentially to his death. 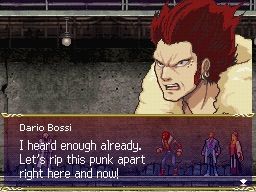 His first confrontation with Soma came after Soma had alreadt faced off with, and defeated, Dmitrii. Sensing his chance to become the dark lord, Dario battles fiercely with Soma, but is handly bested. Quickly teleported away by Celia before Soma can finish him off, the two realize that for Dario to have a chance to defeat Soma he'll need much more power. Thus, Celia fused the fire-demon Aguni to Dario's soul, vastly boosting his powers.

Soma later confronts Dario a second time, much deeper into the castle. This encounter intially goes against Soma as Dario proves very powerful. However, what Dario hadn't been expecting was for Soma to use one of the souls the hero had collected, jumping into the floor-length mirror in the room. While Dario was stuck on the outside, Soma was able to battle the demon fused to Dario's power. Aguni soon went down to Soma's attacks. Once the demon was killed, Soma emerged from the mirror. Dario quickly realized that the death of the demon also had stripped him of his own powers, leaving him without his pyrokenetic abilities.

Powerless, Dario fled from Soma and out of the castle. His story, as far as the series was concerned, ended at this point either because he soon died out in the cold wastes beyond the castle or simply because he did nothing of note ever again.

There are actually two different ways Dario's second fight can go. The intended way is for Soma to jump into the mirror (using the Paranoia soul) to fight Aguni. If, instead, you simply take on Dario and beat him senseless, the game will give you the worst ending. Here, right before you kill him, Alucard will interrupt the fight and force you to stop. Dario, though, will be consumed by fire and, thus, will die. Alucard will then say that Celia escaped, ushering you out of the castle (as there's nothing else to do there).

However, outside the gates of the castle, Soma begins to freak out, talking about a dark energy that entered him after Dario died. It's implied that the Aguni soul was absorbed into Soma an, in essence, will eventually turn him evil. Then the credit roll and you're dumped back to the last save you visited.

it's also worth noting that if you get the next bad ending (where Soma fully embraces his dark side and become the resurrected Dracula, body and soul), Dario can be faced off in the spin-off "Julius Mode". He'll have his powers back at this point, implying that Soma found Dario and gave the criminal back the abilities that had been stripped from him. Julius Mode isn't in-continuity, though, so Dario's true story ends after his second battle (when he flees the castle).

The first encounter with Dario will see him start by throwing fire balls in front of him or summoning huge fire pillars (not unlike the lightning pillars Dracula would sometimes summon in his boss fights). He could also punch the ground, creating a fire wave that would travel along the ground for a short distance. Occasionally he will teleport himself by engulfing his body in flame before reappearing, in another fire bust, elsewhere. His first fight isn't anything too dramatic and, with some simple dodging, you should have him in no time.

although you can fight Dario in his second encounter, that will give you the worst ending. If that's your goal, watch out for his fire dragons (which he'll fire like his original fireballs, plus his fire wave and fire pillars. Much like the first fight, you should have him down in no time.

Of course, instead, you should use the Paranoia soul to jump into the mirror in Dario's boss room to take on the demon bonded to his soul, Aguni. The demon (who gets the "big boss theme" during his battle) has a few attacks you'll need to quickly avoid. It can slam into the ground, creating a big fire wave that goes both ways across the ground. It can also spit fireballs at the ground that, too, creating lingering fire waves. It will also try to slash at you with its massive claws. While it is a powerful foe, most of its attacks are clearly telegraphed so once you recognize what it can do, taking Aguni down should not be a problem at all.

While Dario does have two battles with Soma, officially he doesn't die, making him the only antagonist in the game not to meet a bitter end. Seriously, who'd want to kill that fabulous hair?