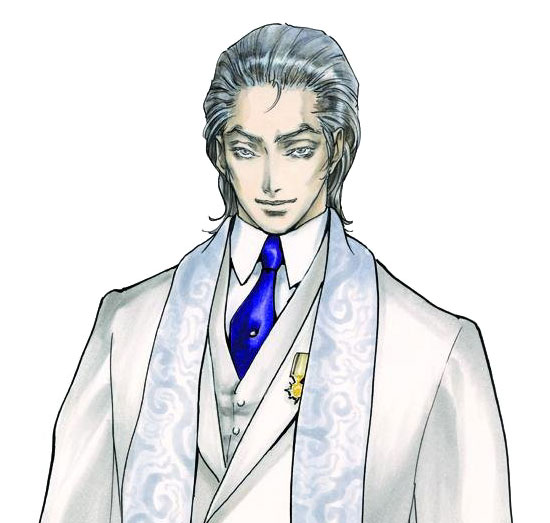 How do you have a Castlevania game without Dracula? The legenday vampire is such an indelible part of the series that while other things may change -- the hero, their weapon, the castle, the other villains -- the one constant throughout has been that Dracula will be in the game. No matter what else happens, what time period the game is in, how strained the story is to make it work, Dracula will show up. It's his series.

That's the connundrum that faced future-set Castlevania: Aria of Sorrow, a game where the very story is that Dracula died in 1999 AD, fully and for real. To get around this issue, the series creators proposed a novel work around: anyone born right after Dracula died could, in fact, be Dracula reincarnated. Of course, those of us that have played the game know that Soma Cruz, hero of the game, is also the resurrected Dracula (even if he doesn't know it for most of the adventure). And yet, there's the possibilty of someone else taking the power (and soul) of Dracula for themselves.

Enter Graham Jones, a besuited gentleman and leader of a nasty cult. Jones think he's the new Dracula, and he certainly has the magical powers to try and prove it. He's not Dracula, of course, but man does he give it the old college try. Well, and then he dies, so I guess I won't be showing up in the sequel.

Born in 1999 AD, at the very moment Dracula was killed, Graham was born with powerful dark magical powers. Due to his abilities (and maybe a bit of taint on his soul), he grew up believing he would become the new Dark Lord, a reincarnation of Dracula with rights to claim all the past demon's powers (as well as his castle). In 199 AD Dracula's castle had been sealed in an eclipse and, when an eclipse occured once more, revealing the castle within, Jones went to the caste with the intent of claiming his "birthright".

There was only one small problem with his plan: Soma Cruz. At the time of the eclipse, the young Soma, too, found himself drawn to the castle, although the man knew not why. He hadn't been born around the time of Dracula's death, so there wasn't a hint as to why he should be at the castle. However, soon after enterting Soma killed a monster and claimed its soul for his own use, a power he'd never had before, almost as if the castle were aiding him. Jones, of course, was perturbed by this development as it meant Soma could potentially also have a claim to the throne of Dracula. This forced Jones to eventually act against the young man.

Although the two cross paths a couple of times, it's only when Graham realizes the full extent of Soma's power that he realizes what he must do. Dodging away from Soma, and the various other heores that had entered the castle (such as the mysterious J and the enigmatic Genya Arikkado), Graham eventually is confronted by yet another hero, the sorceress Yoko Belnades. Before she can force the confrontation, though, Graham stabs her, leaving her for dead in front of Soma while he flees to the top of the castle to gather his power.

With Arikkado's assistance, Soma gains the insight he needs, making his way to the top of the castle to confront Graham. Although the cultist had gathered much power, seeming to tak into the true strength of Dracula, it was Soma who came out on top. Jones was defeated, sent to a bloody hell he richly deserved, while Soma continued onwards to find a way to seal the castle and prevent to resurrection of Dracula's dark magic forever (at least until the sequel). 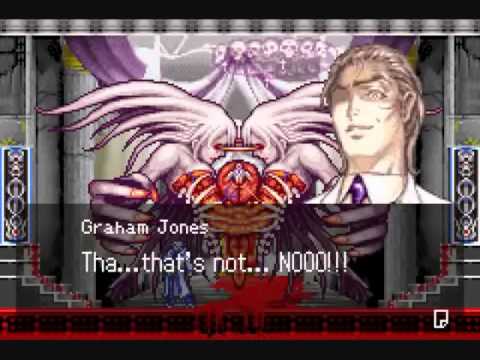 Despite not being the true Dracula, Graham is presented as a strong contender for the title. He even has access to a number of Dracula's powers, such as the hellfire orbs and Dracula's ability to teleport around his boss room. His demonic form was very different, though, which was the first real indication that Graham was not the true Dracula.

To truly defeat Graham, and unlock the last act of the game, Soma has to come into the fight with Graham with three specific souls equipped: Fame Demon, Giant Bat, and Succubus. With these three souls, the castle recognizes its true lord and, upon Grahams defeat, Soma unlocks his true power and realizes just who he is.

Although Graham dies in Aria of Sorrow, his cult lives on in the Japan-only novel Akumajo Dorakyura: Kabuchi no Tsuisokyoku. While we at the Inverted Dungeon do not consider this work a part of official continuity, as it was never released outside Japan, you can read the story via it's English fan-translation, Castlevania: Ricordanza of the Gods Abyss, graciously donated to the site by Shiroi Koumori.

The battle against Graham takes place across three phases. The first is the most Dracula-like, as Graham will teleport around the room, unleashing fireballs (hellfire) and fire orbs (Dark Inferno). He stays in the air the whole time for this (and the next) phase, and he can only be damaged via an attack to his head (just like Dracula). You'll spend a lot of time jumping and slashing during these phases.

Once enough damage has been done to Graham in the first phase, he'll teleport to the middle of the room and float there, spitting out spiraling inferno orbs. Damaging him still requires hitting him in the head, so this is more about pattern memorization and anticipation. This phase can be taken out pretty easily once you get the sequence down.

Finally, Graham will change into his "demonic" form for his last phase. Here, the demonic Graham has two attacks: first, he has a halo that floats over his giant, unholy head -- this will follow Soma around, casting lightning at him periodically. While avoiding this, Soma will also have to dodge Graham's giant hands -- these will blink before striking, and then cannot hit a crouching figure, so the player will need to constantly be on the move to thoroughly take out this threat.