Over the years Konami had a lot of luck with their Metroidvania titles. Once the first of the real Metroidvania games came out, 1997's Castlevania: Symphony of the Night, the more classically styled games (like Castlevania: Legends) pales in comparison. The series was committed to the new style of storytelling, as were the fans.

The gaming market, though, was evolving, arhguably right out from under Konami. As far as the company was concerned the old days of dedicated console (or portable) releases was over and the the time of mobile phones gaming was ascendant. Unfortunately, though, the old action platformers didn't translate very well to portable phones. What was needed was a new game that reflected the tastes of the fans as well as the direction the company wanted to go. Thus, without series producer's input, a new game was made for the Metroidvania side of the series, Castlevania: Order of Shadows, dedicated to mobile phones.

The villain of the game was, of course, Dracula... eventually. As with many of the mainline titles there had to be a guy before you got to the guy, and in this game that leader was Rohan Krause, head of the titular Order of Shadows, and he was... well, he was a guy. Nothing special, and certainly not anything we hadn't seen before (or since).

There may be a reason why Rohan isn't well remembered in the series, and why Order of Shadows isn't referenced in the main continuity at this point. Perhaps Metroidvania just wasn't a good fit for mobile phones of the era. 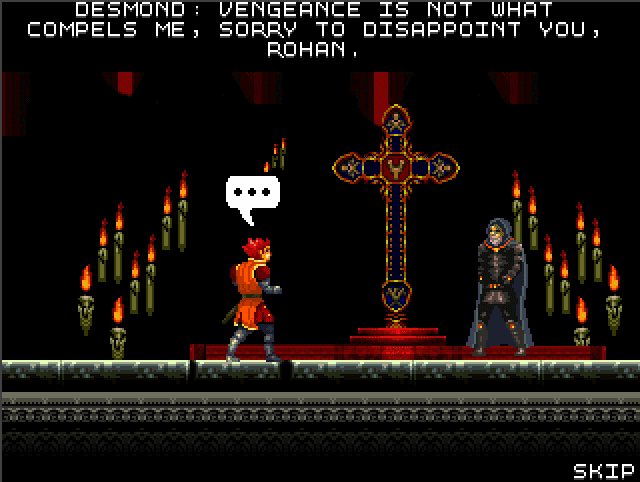 Rohan was the leader of The Order, a group (like many that had come along before) that were dedicated to the resurrection of Dracula, probably in hopes that Dracula would give them all the gift of eternal life (so they could all shamble around his castle, I guess). To that end, Rohan knew he had to take out the one threat to Dracula's eventual rise: the Belmonts. So Rohan, a master of alchemy and possessor of one of the most powerful magical artifacts aroung, Gandolfini's Magic Gauntles, went with his followers to kill of the Belmont clan.

They nearly succeeded, too. They managed to kill off the elder Belmonts, the mother and father of eventual hero Desmond, but he wasn't able to eliminate the younger members of the clan. Twenty years later, fearing what Rohan could do without a Belmont to defeat him, Desmond took up the mantle of Belmont hero and set off to the ruins of Castle Dracula to find the order and stop their leader in his tracks.

Unfortunately for Rohan, Desmond was able to clear through the fortress faster than Rohan expected. Before Rohan could complete the blood ritual to raise Dracula, Desmond entered the chamber and engaged the villain in combat -- note, not to avenge his parents but simply because Dracula had to be stopped at any cost. THe two engaged in combat but Rohan was no matched for the now powered up hero, and was killed in the battle. His plan did, in a way, succeed, though, as the blood from his own wounds did raise Dracula.

Sadly for Rohan and his plans, Dracula, too, proved to be unequal to the task and, eventually, Desmond was able to best the vampire lord as well. For all his plans, and all those deaths, Dracula died once more, unable to carry out any grand scheme at all.

AFter a short cutscene of the two, hero and villain talking, the battle will quickly pick up. Rohan has a nuber of fire-based attacks -- three red fireballs that will travel out slowly in a wall, one blue fireball that will shoot acros the screen quickly, and then a flurry of fireballs that will drop from the ceiling and burn on the floor for a bit -- all of which can keep the Belmont out of range of melee attacking. THat's really all that Krause can do and, frankly, he doesn't have much power or health so, beffore the battle even really starts to draw out it'll already be over with Desmond victorious.