When Castlevania: Aria of Sorrow debuted it told the tale of Soma Cruz, foreign exchange student and unlike hero who just so happened to be the reincarnation of Dracula. That game saw Soma fight his way through Dracula's resurrected castle before going to the source of Dracula's (and the Castle's) power, the Chaos Realm, to defeat the entity that resided within, Chaos, in theory sealing away that power forever.

Aria of Sorrow wasn't the biggest seller; although popular in the U.S., it fared much more poorly in Japan, and over all its sales numbers were down from the start of the GBA era with Castlevania: Circle of the Moon. Konami, seeing a new Nintendo portable on the horizon and hoping to strike early in the life, elected to give Aria second go, giving the title one of the rare direct sequels in the series with Castlevania: Dawn of Sorrow.

The story was similar between the games -- both having pretenders for Dracula's power arriving at a castle, luring Soma in and, in the end, watching as his power of Dominance (Dracula's gift that allowed him to command the demons of his castle) came to the forefront. Soma, in both cases, eventually had to travel to the heart of the castle to defeat the true, underlying evil lurking within; in the case of Aria this was Chaos, so Dawn needed its own version. It needed its own powerful demon that represented the magic at the core of the evil domicile.

Enter Menace, an amalgam of all the evil demons within the castle. This hulking beast, though, wasn't the power source of the castle but, instead, illustrated how that magic could go truly bad. Soma, of course, still had to defeat this beast (that's his job as the hero), and in the end the result was the same -- hero victorious, demon dead, magic once again sealed away. Maybe this time people will learn not to play with Soma's toys, too. 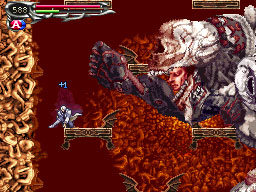 After successfully defeating Chaos, Soma assumed his job as a hero was over. However, a year later, the hero was dragged into another adventure as a new cult dedicated to worshiping Dracula's power arose. Lead by Celia Fortner, this cult has two potential new hosts for Dracula's Dominance: Dario Bossi and Dmitrii Blinov. Although Dario had been bested by Soma earlier in the game, his power stolen by Dmitrii, the young Blinov lad still had aspirations for the throne of Dracula. After repeated, failed attempts at luring out the demonic side of Soma so his powers could be stolen, Dmitrii finally found a way to copy the Dominance power (at least, so he thought), stealing away with cult leader Celia into the Abyss at the heart of the castle to use this new-found power to become the true Dracula.

When Soma arrived in the Abyss he watched as Dmitrii casually killed Celia, cementing the darkness in his soul. However, while he thought he had a proper copy of the Dominance power, what he had was imperfect and far from the real thing. All the demon souls he'd collected after gaining this fax Dominance congealed within his body, eventually taking on their own form. This new beast, Menace, ripped its way out of Dmitrii's body, painfully killing the led. This lead to a heated battle between Soma and the hulking beast as our hero had to fight the creature as it slowly gained its feet and came into its own power. The world would have been in real danger if Soma failed, but thankfully our hero was strong enough to take on this demonic conglomeration and defeat the hulking mass once and for all.

Victorious, Soma left the castle with the knowledge that the world was once again safe from his power. Better still, the cult was eradicated, never to rise up again, potentially leaving the world safe from anyone hoping to claim Dracula's power ever again. 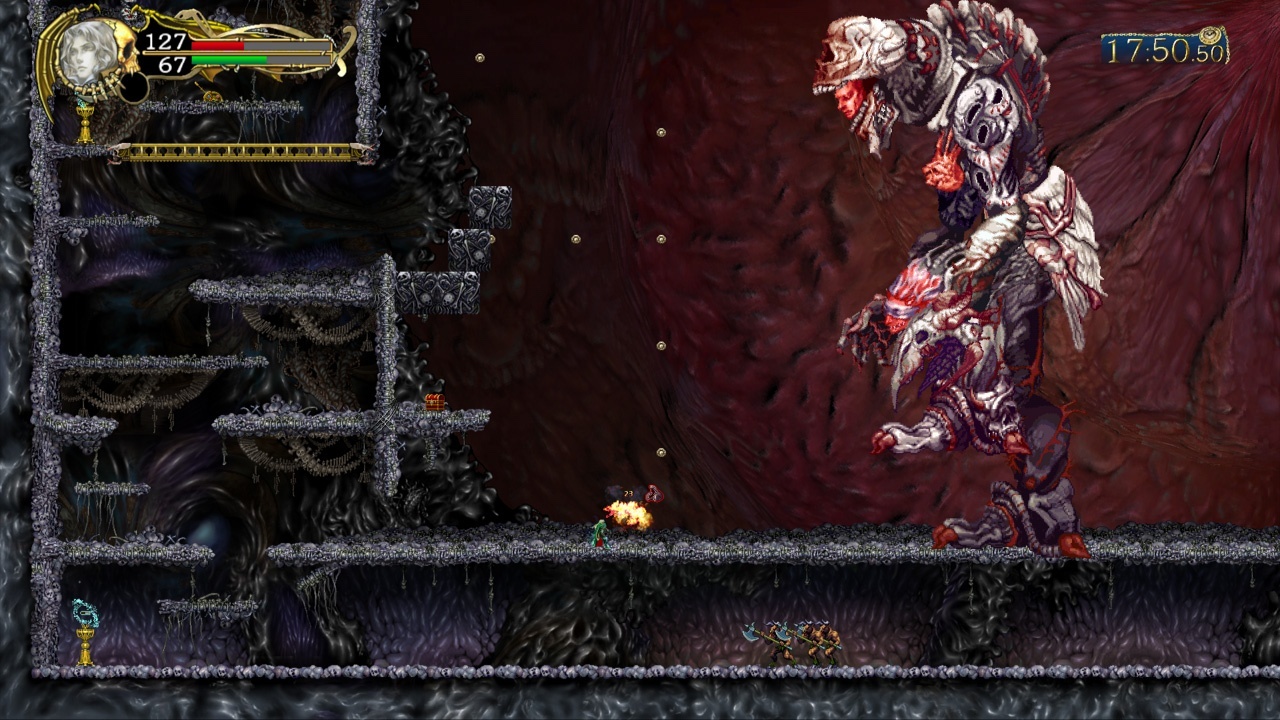 The first battle with Menace, in Dawn of Sorrow, was a three part affair. Menace starts off crouched over top of Soma, unable to stand yet. Surrounding the hero, the beast would move around, trying to hit Soma or knock him into spikes around the stage. Soma would have to hit the weird, human head sticking out from Menace's chest, the weak point that, once damaged enough, would lead to the next phase of the fight.

Once his first weak point is destroyed, Menace will stand up, revealing the next weak point. The second a third "phases" of the battle basically run together. While down near the floor of the arena, Soma will have to contend with a weak point near the beast's knee. The beast will walk back and forth, not unlike one of the hulking golems within the castle, occasionally getting kicked around (and even air-juggled) if the player gets too greedy with their attacks. Meanwhile up near the top of the beast, one last weak point resides in Menace's "face". Here, while Menace is moving, he will punch out at Soma, trying to damage the hero and knock them back.

Additionally, Menace, while standing, can summon little demonic heads that will home in on Soma, forcing the player to mind their space and take out these obstructions as well. This all amounts to a bit of a dance as Soma has to scale the platforms around the stage to reach Menace's weak points while avoiding all of the beast's attacks.

When Menace reappeared in Harmony of Despair, his attacks and pattern remained the same except for one difference: the starting phase with Menace hunched over the hero is skipped, with Menace starting standing. All his weak points still have to be defeated, though. It's also worth noting that Menace is larger here in this fight, making for a more massive beast to scale, although with a group if heroes battling him, this increase in size feels like a proper re-balance for the fight.

Of note, these three hit boxes on both versions of Menace probably allude to Celia, Dario, and Dmitrii, the three villains of Dawn who end up granting their powers to create Menace. That's a nice design touch.