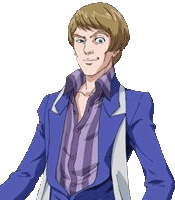 Ostensibly, Celia Fortner is the villain, but her plan is about bringing back Dracula (who, in a way, never shows up in the main game). Her two hosts for Dracula also play villainous roles, but of the two only Dmitrii makes a real impact. He's the one that betrays Celia, the one to try and gain the true power of Dracula and, well, the one that almost accidentally destroys the world.

Dmitrii is not a smart guy. He's powerful, sure, and a raging ego maniac, but he was dealing with powers he didn't fully understand. When his power went awry he managed to create a beast he could control, one that killed him and could have destroyed the planet. That doesn't make him a great villain, but he certainly does get an A+ for going big. Just, probably not the outcome he was looking for.

When Dracula died (in 1999 AD), it caused a release of dark magic to spread across the world. People born at the time of his death, like Dmitrii Blinov, were shown to have the potential to harness that dark energy for their own uses. Dmitrii grew up rash and egotistical, fully aware of the power he posessed and what he could do with it. When others would come after him with magic, he could reflect the magic back at them, copying their very abilities.

Seeing the power within Dmitrii, Celia Fortner, leader of the Dracula-woshipping cult With Light, brought Dmitrii into the fold, grooming him to be one of two potential hosts for Dracula's power. The only problem was that Dracula's soul had already found a host: Soma Cruz. To fix that, Celia had a replica of Dracula's castle built (and populated with demons). Secreting Dmitrii (and the other potential host, Dario Bossi) at the castle, Celia lured Soma in there, potentially to his death.

Dmitrii's first confrontation with Soma early in the young heroes' exploration of the castle. The two faced off, with Dmitrii boasting of his "rightful" claim to Dracula's power. However, his abilities were no where near as strong as Soma's and Dmitrii was handily bested. However, despite Soma's attempts to not kill Dmitrii, the young man seemingly dies from the confrontation, leaving Soma confused and conflicted over what just happened. Soma absorbed Dmitrii's soul (another confusing detail as Soma didn't think he could absorb human souls), although nothing seemed to come of it at the time.

Much later, after Soma confronted, and bested the other acolyte, Dario, twice, he came to a confrontation with Celia herself. There, Celia had her own wicked plan. Using a doppelganger duplicating the looks and voice of Soma's love, Mina Hakuba, Celia makes it look as thought she intended to kill Mina. This, she hoped, would cause Soma to lose it and turn into Dracula. However, thanks to a talisman that Mina had given Soma earlier, and a little well-timed assistance from Alucard, Soma resisted the lure of Dracula's evil and remains a good soul.

This is where Dmitrii made his move once more. Having been within Soma this whole time, Dmitrii felt the build up of evil as Soma fought with the powers inside him. Using this opportunity, Dmitrii's soul copied Soma's own power of Dominance (what gave him the ability to absorb enemy souls). The soul then fled Soma's body, using the doppelganger as a new host, creating a new body for Dmitrii. Knowing that he was the last true potential candidate for Dracula's power, Dmitrii fled with Celia, the two finding a new place to hide in the Abyss of the castle. 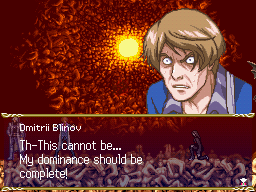 Once Soma tracked the two to the final area of the game, he witnesses Dmitrii sacrifice Celia in an attempt to gain more power for himself. However, what Dmitrii hadn't expected was that the verion of Dominance he was using was but a pale imitation of the real power within Soma. The soul's he'd collected since thus resisted his power and, eventually, burst out of his body (killing him once more), forming a new and larger threat, the demonic Menace. This abomination of power became the last battle Soma had to face.

Due to the powers being thrown around, which all began to fade once Soma finished off Menace, the heroes all had to flee the castle as its very magic collapsed. THe day had been saved, annd another death cult for Dracula was ended. It was presumed, that Soma, then, could live in peace with all the potential threats to his life and happiness eliminted once and for all.

The first (and really, only) battle against Dmitrii happens early in the game. Although you might not have many souls to work with, that won't be much of a concern -- neither with Dmitrii. Whatever soul power you use against Dmitrii he'll use back and you. He won't even really try to dodge all that much, so you can use just about anything you want. The trick is to use something easy for you to dodge, since he'll throw it back at you, and then just layer on the damage. He'll go down quickly enough.

Although you see Dmitrii repeatedly after this first encounter, you won't really fight him again. WHat you'll fight is the massive combiantion of all the soul he collected, called Menace, as the last boss of the game (right after is bursts out of his body, destroying him). Menace is a multi-prong afair. You'll first begin under the hulking beast with an obvious weakpoint, a head-like protrusion, hanging above you. Attack this head the best way you can while dodging rising sword-like attacks from the ground, others from the top, and spewing poison clouds from the side. The attacks are well telegraphed so once you learn them, dodging them should be that hard.

After this first phase, once the head is destroyed, Menace will stand up (apparently he's been curled up over you the whole time. THis will free you up to move around more, and you'll going to have to do a lot of moving to take out all the weak point on this beast. Menace is huge, more than two screens tall, so you'll need to use the platforms provided in the arena to scale up to him and attack the weak point in his mouth. Watch out for his slashing attacks and uppercuts, which can quickly get you from the side especially if you're too low on the platforms. You'll also have to clear out regularly spawning little flying demon-mouths that will come at you (although thankfully they aren't that armored and die pretty easily).

Menace has another weak point on his knee. Here you'll need to watch out for his kicks and stomps. These are no where near as fast as his hand attacks, but they can do massive damage to the unsuspecting. Once you've eliminated these two weak points (in either order), Menace will be defeated, collapsing upon himself, ushering in the end of the game.