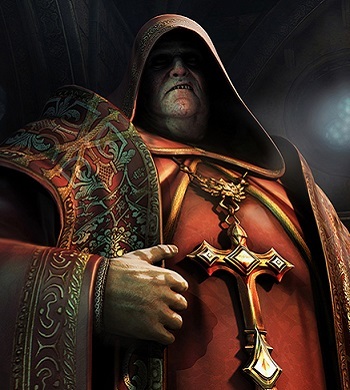 To gain a foothold in the world of man, Satan needed disciples to ensure his ascendance. As the Lord of Darkness could not stop foot on Earth he needed his three acolytes -- Raisa Volkova, Nergal Meslamstea, Guido Szandor -- to pollute humanity and taint the world, to make it ready so Satan could rise. Each of the acolytes had their mission, to work through disease, through war, and then twisted faith, and had their plans gone properly they would have watched as Satan ruled the world.

What they hadn't counted on, though, was the rise of Dracula (ne Gabriel Belmont), the vampire lord who, for 500 years, had slumbered in Castlevania City. Without this vampire king, Satan's plans would have gone off without a hitch, but because the vampire rose, and set about dismantling Satan's plans, the Dark King of Hell found that his power-base was slowly crumbling underneath him.

Dracula took out each of the acolytes, starting with Raisa and then moving on to Nergal. This left only Guido Szandor, the head of the Church of Satan and the evil one's last living acolyte, to finish the work. Guido, in a basically dedicated to his faith, began a summoning spell to raise Satan, but his lord told him to deal with the vampires and then cast the resurrection spell in Dracula's own Cathedral. Dracula then arrived on the scene and confronted Guido, who quickly scampered away. Giving chase, Dracula followed Guido to the cathedral but was unable to stop the final convocation. Using his dark magics, Guido was able to summon Satan so that the Dark One could live on Earth.

Satan, though, was not happy. Guido had failed to deal with Dracula effectively, defying Satan's desires. As punishment Satan ripped off Guido's face, leaving the church leader horribly managed and bleeding. Guido collapsed to the floor of the cathedral where, upon his death, he disappeared, his soul a wisp lost in the night (which means that Guido is the only acolyte that Dracula doesn't kill himself).